Actually, It's Good That Major Networks Are Covering Both Trump's and Biden's Town Halls

No, it’s not “bad for democracy” to keep giving a platform to the President of the United States. 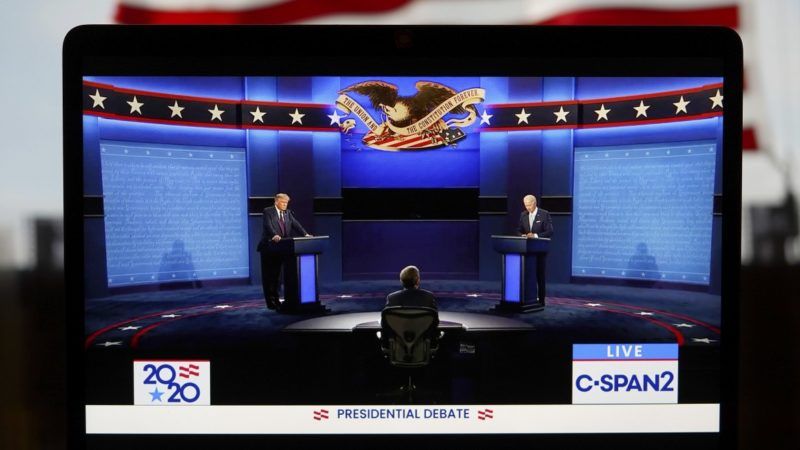 Tonight, President Donald Trump and former Vice President Joe Biden will host separate town hall events where each of them will answer questions from voters.

These two events are a replacement for what was supposed to be another presidential debate, but after Trump's COVID-19 infection, the Commission on Presidential Debates decided they'd go with a virtual debate format. Trump wouldn't agree to that change and Biden suggested they push the debate back a week before the entire debate was just scrapped.

Trump's town hall will be on NBC and Biden's will be on ABC, with both starting at 8 p.m. Eastern. Some very important media people are now very mad that Trump seems to have deliberately pushed for the same slot as Biden to make them compete for viewers.

Based on reporting by the Washington Post and The New York Times, the complaining seems to primarily be in media circles. Arguably, it's actually only coming from various people in the media. From the Post:

Veteran journalist Jeff Greenfield called it "indefensible" on Twitter, where a call to boycott NBC was a trending topic.

"They rewarded Trump by giving him this time," Greenfield said in an interview.

"Y'all sign my checks of late but I'm disgusted by my home network giving Trump a platform for fear mongering, bigotry and disinformation," she wrote on Twitter.

Over the last four years, many in the media and the pundit class have argued that media outlets should stop "rewarding" Trump with coverage because of his outlandish, crude, nasty, and boorish behavior, particularly at his rallies.

But Trump, horrible or saintly, is President of the United States. It is, in fact, part of the role that the media has defined for itself in a democratic society to give platforms for elected leaders to speak, and then also hold them accountable with fact-checking and investigation. It is completely ethical and moral for NBC to host President Trump's town hall, taking place less than a month before Election Day.

As the Post notes, town halls get much smaller numbers of viewers. The first presidential debate was seen by 73 million people, according to Nielsen ratings. Tonight's town halls might not even crack 10 million each. That is to say, most Americans aren't actually going to watch either of them, making the outrage even more insipid and performative. Some may ultimately just watch clips of interesting moments online. There is a bizarre sense of moral outrage at the very idea of competition for attention in the framework of democracy, as though that weren't actually a feature of the voting.

But nobody actually has to watch these events live, right? The viewership numbers game matters primarily to the media outlets themselves, to the data nerds at the campaigns who are paid to worry about this, and to Trump, who still thinks ratings matter in 2020 even though primetime network television is years into a long slide into irrelevance.

Democracy is losing nothing by having the two of them go head to head in the same timeslot. The percentage of undecided voters is much, much smaller than it was in 2016 at this time; we're talking in the 3 to 5 percent range in many recent polls. Biden's town hall will most likely be watched by Biden voters and the media. Trump's town hall will most likely be watched by Trump voters and the media. To the extent that anything of actual value comes out of either town hall, the media should cover it for the benefit of that small group of Americans who remain undecided.