The senator thinks people with felony records should lose the right to armed self-defense but not the right to cast a ballot. 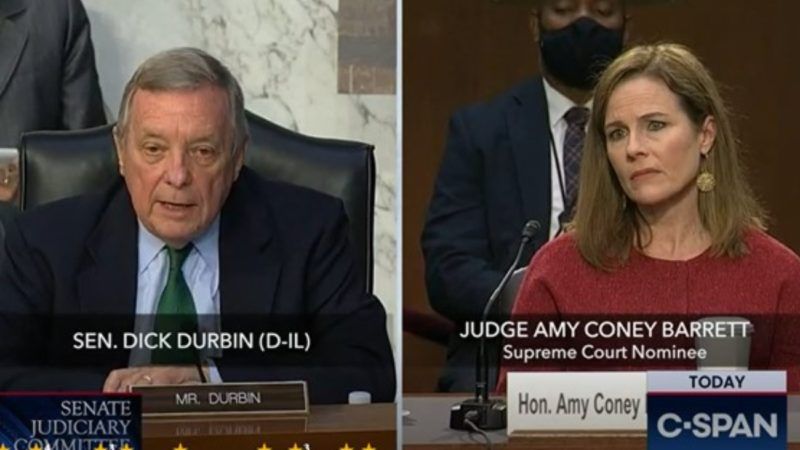 When Sen. Richard Durbin (D–Ill.) grilled Supreme Court nominee Amy Coney Barrett about her critique of categorical bans on gun ownership by people with felony records yesterday, he misrepresented her view of voting rights. He also made a dubious statement about the relative importance of casting a ballot vs. exercising the fundamental right of self-defense that betrays a casual disregard for the latter.

In the 2019 case Kanter v. Barr, a three-judge panel of the U.S. Court of Appeals for the 7th Circuit upheld state and federal laws that ban gun possession by people convicted of felonies, regardless of whether their crimes involved violence. Rickey Kanter, a Wisconsin man who had been convicted of mail fraud, argued that such bans violate the Second Amendment because they deprive people of the right to arms even when they have never demonstrated any violent tendencies.

In her dissent from the 7th Circuit's rejection of that argument, Barrett challenged the idea that the original public understanding of the Second Amendment was consistent with "virtue-based restrictions" on the right to arms. Historically, she said, "such restrictions applied to civic rights like voting and jury service, not to individual rights like the right to possess a gun."

Durbin latched onto that distinction to suggest that Barrett has no problem with disenfranchising people when they are convicted of felonies. "You said disqualifying a person from voting…because of a felony is OK, but when it comes to the possession of firearms, wait a minute, we're talking about the individual right of a Second Amendment," he said. "I don't get it."

According to Durbin's gloss, Barrett thinks "a felony should not disqualify Rickey from buying an AK-47, but using a felony conviction in someone's past to deny them the right to vote is all right." That conclusion "is hard to swallow," he said. "I think the right to vote should be given at least as much respect as any Second Amendment right. Do you?"

Barrett gently suggested that Durbin, who said he had "read and reread" her opinion, "might be taking my statement in Kanter out of context." While "the Supreme Court has repeatedly said that voting is a fundamental right," she noted, "the Constitution contemplates that states have the freedom to deprive felons of the right to vote," which is "expressed in the constitutional text."

Section 2 of the 14th Amendment reduces the congressional representation of states that deny or abridge the voting rights of U.S. citizens "except for participation in rebellion, or other crime." The Supreme Court has interpreted that provision as allowing states to take away people's voting rights when they are convicted of felonies.

"I expressed no view about what the constitutional limits of that might be or whether the law should change with respect to felon voting rights," Barrett noted. "Obviously, that's a contested issue in some states that are considering it right now. And I have no view on that, and it wasn't the subject of Kanter."

While misleadingly portraying Barrett as untroubled by the consequences of felon disenfranchisement, Durbin himself seemed completely untroubled by the consequences of permanently disarming people without any evidence that they are prone to violence. That policy makes sense, he said, because distinguishing between violent and nonviolent felonies would be impractical (even though courts make that sort of distinction all the time, as Barrett pointed out). Yet the policy Durbin supports, like the one he opposes, is unjust and has a disproportionate racial impact, since one-third of African-American men have felony records, compared to 8 percent of the general population.

"Many felony voting bans were passed in the late 1860s and 1870s, when implementation of the 15th Amendment and its extension of voting rights to African Americans were ardently contested," Durbin noted. "The felony conviction was used to disqualify African Americans from voting in the South and in many other places." He said felon disenfranchisement reflects the "thinking in the 19th century that resulted in voter suppression and taking away the right to vote from millions of African Americans across this country," which "still continues to this day."

By the same token, the policy challenged by Kanter could be viewed as a continuation of 19th-century attempts to deprive African Americans of the right to arms—the right that Chief Justice Roger Taney, the author of Dred Scott v. Sandford, warned they would be allowed to exercise if they were recognized as citizens. That right was crucial to blacks facing white supremacist terror and intimidation in the 19th and 20th centuries, and it was intertwined with the right to vote. During the civil rights movement, activists registering black voters in the South relied on firearms to defend themselves against racists who wanted to stop them.

While Durbin says "the right to vote should be given at least as much respect as any Second Amendment right," the basic human right of self-preservation will strike many people as more important than the right to cast a ballot. You can't vote if you're dead.

Durbin views felon disenfranchisement as especially disturbing because it has a disproportionate impact on African Americans. Yet Durbin has no qualms about a policy that permanently deprives 7 million African-American men of the constitutional right to armed self-defense, even when they pose no plausible danger to the general public—including people who were convicted of violating drug laws that criminalize peaceful transactions between consenting adults. I don't get it.