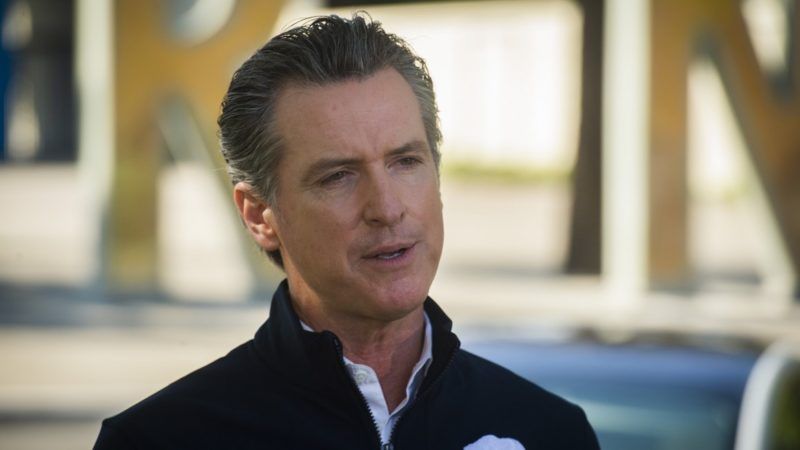 Starting this week, California will require counties to meet certain equity requirements before they're permitted to reopen more businesses and social activities.

Proponents of this equity-focused approach say it is necessary to prevent the most vulnerable communities from being left behind as the state digs its way out of the pandemic. Critics call it a deeply flawed and potentially illegal means of determining which areas are safe to reopen, and they argue that it will only slow California's recovery.

"Our entire state has come together to redouble our efforts to reduce the devastating toll COVID-19 has had on our Latino, Black and Pacific Islander communities," said Acting State Public Health Officer Dr. Erica Pan in a press release. "This isn't just a matter of higher cases in these communities—it is an issue of life and death that is hurting all Californians."

"Even if we are talking about issues of genuine inequity, there is no justification for the governor to wield emergency powers and restrict the most basic liberties of citizens for purposes of equity," counters Assemblyman Kevin Kiley (R–Folsom). "It is an extremely dangerous thing to impose these restrictions that are only supposed to exist for genuine emergencies, genuine public health purposes, but instead use them for a social agenda."

Since August, reopenings in California have been dictated by the state's Blueprint for a Safer Economy. This blueprint places counties in one of four tiers based on the local severity of the pandemic, as measured by the number of new cases per 100,000 people (the case rate) and the percentage of coronavirus tests coming back positive (the test positivity rate).

Counties that show improvement in their case and test positivity rates over a two-week period are allowed to move into a less restrictive tier, where more businesses and activities are permitted. Backtracking on these metrics can kick a county back into a more restrictive tier.

Starting Tuesday, counties' reopenings will also hinge on the test positivity rates in their most disadvantaged neighborhoods, as defined by the state's new equity metric, and on whether counties make targeted public health investments in those neighborhoods.

If those communities' test positivity rates lag behind the county's overall rate, they'll be prevented from moving into a less restrictive tier. On the flip side, this metric could potentially allow some counties to reopen more quickly. If their test positivity rates are low enough in both disadvantaged neighborhoods and the county as a whole to meet the requirements of a less restrictive tier, they're allowed to proceed with reopenings, even if their case rate is still too high. Counties cannot be bumped back a tier for backtracking on the equity metric.

Needless to say, it's a pretty complex formula. The idea, according to Mark Ghaly, California's health secretary, is to ensure that counties with localized hotspots don't reopen too hastily, thus allowing those hotspots to spread.

"The disparate levels of transmission within a single county can really lead to problems for the entire county, as the level of mixing, while we reopen more of our business sectors, occurs," Ghaly told NPR. "This is not just a focus on the race and ethnic impacts of COVID, but really a strategy to make sure we address transmission in a wise and thoughtful way across our state."

In one sense, this is similar to the approach taken in New York, where Gov. Andrew Cuomo's "Cluster Action Initiative" sets reopening conditions on a neighborhood-by-neighborhood level, based on their proximity to identified hotspots.

Kiley and other elected officials from the Folsom area praised that approach in a letter this week to Gavin Newsom, California's Democratic governor, saying county boundaries were an arbitrary and imprecise means of determining which areas should be allowed to reopen.

But California's approach differs from New York's in a couple of important ways.

For starters, while local hotspots could prevent counties from moving into a less restrictive tier, reopening conditions are still being set at the county level. Moreover, local hotspots only make a difference in whether a county is allowed to reopen if they occur in disadvantaged communities, or if they are large enough to throw off countywide numbers.

Critics charge that this weakens the justification of the equity metric as a means of controlling coronavirus clusters before they get out of hand.

"If that were the concern, the straightforward response would be to require a showing of investment in addressing whatever localized hot spots a county might have, no matter what their racial or socioeconomic composition," writes Water Olson of the Cato Institute.

"We know that over the course of the pandemic many hot spots have emerged in places that were not especially disadvantaged economically—ski resorts, college towns, places with many international business travelers, and so forth," Olson continues. "Apparently it's going to be fine for a county to reopen in California if it's got localized hot spots in categories like those, so long as its overall countywide numbers are satisfactory."

Los Angeles Mayor Eric Garcetti has been waging a low-level war against house parties in the city's wealthy West Hills neighborhood on the logic that the potential for superspreader events in richer neighborhoods could still endanger the entire city.

Also controversial is how the state identifies disadvantaged neighborhoods.

The equity metric defines disadvantaged neighborhoods as the 25 percent of census tracts in a county that score the lowest on the state's Healthy Places Index. That index uses a weighted measure of 25 different individual indicators to score tracts on a range of demographic factors, including unemployment levels, rates of car ownership, high school graduation rates, number of alcohol outlets, tree canopy coverage, and voter turnout.

"All of these things are put into this formula that then spits out a number," Kiley tells Reason. "And your reopening is conditioned not even on achieving public health goals in some objective sense but actually on the relative performance of different parts of your county that are divided up in an arbitrary fashion."

State officials have pointed to the higher case rates in these low-scoring census tracts to justify its new approach. The California Department of Public Health's website notes that the bottom quartile of census tracts, as ranked by the Healthy Places Index, holds 24 percent of the state's population but has experienced 40 percent of California's reported COVID-19 infections.

How impactful these new equity requirements will be on the pace of reopening remains to be seen. According to data put out by the California Department of Public Health this week, 23 of the state's 58 counties are hitting their equity metric targets, including Los Angeles County. Twelve others, including San Diego, San Francisco, and Orange counties, are not. Another 23 counties are exempt from the state's equity metric because their small population size makes accurately measuring test positivity rates by census tract impossible.

Only Humboldt County in Northern California meets the criteria for accelerated reopening under the equity metric.

Another concern is that the state government will use this new metric to strongarm counties into adopting policies that have little to do with fighting the pandemic.

Olson expresses the same concerns in his blog post, writing that "one hopes that what is going on here is not a threat to restrain economic activity that would otherwise be recognized as low-​risk as a way of obtaining leverage with which to push counties into 'equity' initiatives that go beyond criteria of sound disease control."

At present, California's approach to reopening doesn't appear to give the state a huge amount of additional leverage to force local governments into adopting policies unrelated to the pandemic.

The most notable new tool it has is the requirement that these local governments file reports detailing the "targeted investments" they're making to correct for disparities in disadvantaged neighborhoods. But the Department of Public Health's website says these investments should be spent on things like "augmenting testing, disease investigation, contact tracing, isolation/quarantine support, and education and outreach efforts for workers," all of which sounds pretty closely linked to virus suppression.

Also, the money counties would have to spend on those activities will come out of funding from the U.S. Centers for Disease Control and Prevention's Epidemiology and Laboratory Capacity program.

California as a whole has received about $500 million from that program during the pandemic. Individual counties' awards have been much smaller still, amounting to less than $1 million in some cases. Adding strings to that money doesn't give the state too much added authority.

But given the extraordinary powers California's state government has claimed for itself during the pandemic, it's entirely possible that these requirements will grow more stringent and be linked to other pots of money.

More concerning than the metric's specifics is the fact that government in California, at any level, is still using emergency powers in an attempt to micromanage what kinds of activities are allowed during the pandemic. Ultimately, we should be leaving these decisions up to businesses and individuals. If it is still appropriate for the government to restrict some high-risk activities, the decision to do that should be made on the most local level possible, not through a complex, confusing, and centralized formula laid down from the state capitol.