Court OKs Deportation of Hundreds of Thousands of Immigrants, Another Says Homeland Security's Head Might Have No Legal Authority 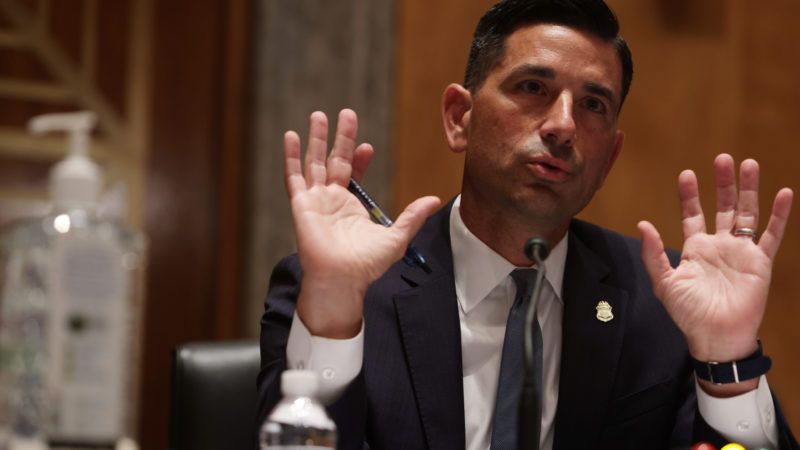 Acting Department of Homeland Security (DHS) Secretary Chad Wolf is likely illegitimate, a federal court says. That means some of the Trump-era asylum rules Wolf presided over are on hold, too.

The appointment of former Acting Secretary Kevin McAleenan "was invalid under the agency's applicable order of succession, and so he lacked the authority to amend the order of succession to ensure Wolf's installation as Acting Secretary," wrote Judge Paula Xinis in the U.S. District Court for the District of Maryland's opinion, issued Friday (a day after President Donald Trump formally nominated Wolf—who has been acting DHS secretary since November—as the agency's official head).

"Because Wolf filled the role of Acting Secretary without authority, he promulgated the challenged [asylum] rules also 'in excess of…authority,' and not 'in accordance with the law,'" Xinis continued.

The court concluded that "preliminary injunctive relief" was warranted for both CASA and ASAP (but not the other plaintiffs), temporarily blocking "enforcement of the following rule changes against CASA and ASAP's members":

It's a limited reprieve for now, but positive news nonetheless.

Another federal court ruling regarding immigration isn't so heartening. This one from Monday says the Trump administration can force out hundreds of thousands of immigrants who reside legally in the U.S. under what's referred to as "temporary protected status."

Judges on the U.S. Court of Appeals ruled 2-1 to vacate a 2018 district court ruling that preliminarily blocked enforcement of the administration's order, which end the protected status program for immigrants from El Salvador, Haiti, Nicaragua, and Sudan.

In finding "that the Trump administration acted within its authority in terminating legal protections" for these immigrants, the court "effectively strips legal immigration status from some 400,000 people, rendering them deportable if they do not voluntarily leave the country," The New York Times reports.

Congress is out of touch on tech companies. "While Democratic and Republican officials have been criticizing the conduct of U.S. 'Big Tech' companies, a growing disconnect separates those crusading politicians from the way a lot of consumers are feeling," writes Art Raymond at Utah's Deseret News, in a look at consumer polling and political posturing around tech products. "It turns out, a close look at the attitudes of the average Jills and Joes who use the tech products and platforms every day reveals that, frankly, they really don't care that much."

Trump is fearmongering about Iran again. "According to press reports, Iran may be planning an assassination, or other attack, against the United States in retaliation for the killing of terrorist leader [Qassem] Soleimani," the president—who has lately been talking up his supposed anti-war bona fides—tweeted late last night. "Any attack by Iran, in any form, against the United States will be met with an attack on Iran that will be 1,000 times greater in magnitude!"

• The U.S. Court of Appeals for the 11th Circuit ruled that it's OK for Florida to make people convicted of felonies who have served their sentences pay off all court debt before they regain the right to vote.

• Ruling parties use the instruments of power to ensure their dominance, example 8 billion:

This means clerks do not have to reprint ballots and can now mail them.

• A new lawsuit alleges a range of abuses against immigrant detainees at the Irwin County Detention Center in Georgia. You can read all the allegations here.

• Who had "agreeing with Chuck Schumer on something" on their 2020 bingo card?

The time has come to decriminalize marijuana in this country.

• All the clap emojis:

Last night, sex workers in Oakland sent a clear message to @KamalaHarris on her home turf: her vote to advance the #EARNITAct was a betrayal.

The EARN IT Act is SESTA/FOSTA 2.0. pic.twitter.com/vYhQBIDQlY

• Another good piece on the controversy surrounding the movie Cuties:

Lots of uniformed opinion out there engaging in censorship. Not a good sign for America. I focus on aspects of the film many are willfully ignoring. @CathyYoung63 @nickgillespie @mattzollerseitz
Cuties is Not What You Think https://t.co/P4RHiaKOIw