L.A. Sheriff's Deputies Assault Reporter, Then Attempt To Mislead Public About It

Tensions are high over the weekend shooting of two deputies. 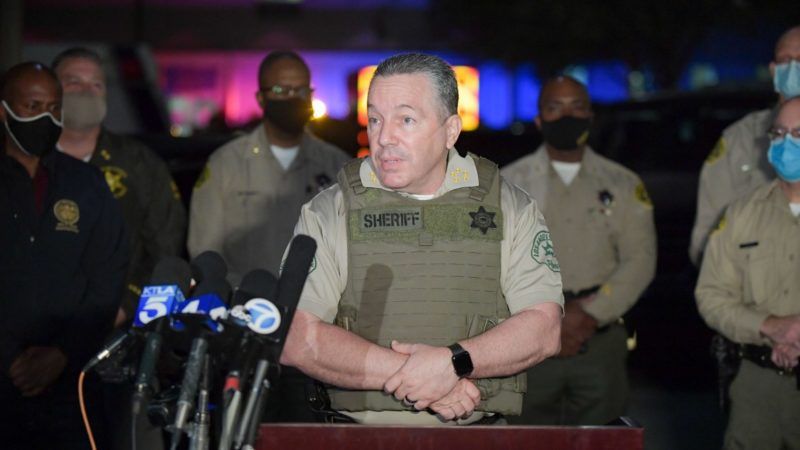 Two Los Angeles County Sheriff's Department (LASD) deputies are recovering after a Saturday double shooting in which a gunman in Compton apparently walked up to their SUV and opened fire.

The incident has poured gasoline on a summer of protests and riots. President Donald Trump called the shooter an "animal" at a Nevada rally Sunday, adding that anybody who kills a police officer should receive the death penalty.

The incident also led to a bizarrely violent encounter between LASD deputies and a reporter from LAist and the NPR affiliate KPCC. The journalist was assaulted and arrested, and the sheriff's department's explanation simply does not match what video of the encounter shows.

Josie Huang had gone to St. Francis Hospital in Lynwood to cover an LASD press conference about the state of the two deputies. A small protest was taking place outside the hospital—a handful of people angry about the LASD's fatal shooting of a cyclist in late August.

According to Huang's account, she decided to follow deputies as they followed a man up a nearby street. Then she saw a commotion as they arrested the man. She was filming the arrest when the officers turned on her, shoved her, knocked her down, and arrested her. Her phone video captured deputies asking her to back up and then immediately attacking her and knocking her down. She was wearing her press pass and yelled, while she was on the ground, that she's a reporter with KPCC. Her phone kept recording after it was knocked out of her grasp, showing two deputies crushing it under their boots. Huang was detained for five hours and has been charged with obstruction.

Before she tweeted her video of the incident, the LASD shared its own description of what happened. It is rather different from what we see in the video. The LASD claims that while its deputies were arresting a protester for refusing to comply with dispersal orders, "a female adult ran towards the deputies, ignored repeated commands to stay back as they struggled with the male and interfered with the arrest. The female adult, who was later identified as a member of the press, did not identify herself as press and later admitted she did not have proper press credentials on her person."

The only thing that's true here is that they ordered her to stay back—and then they attacked her immediately, before she could even respond.

Here is additional footage of the incident:

Thank you https://t.co/5ajOiRV1m6 for what is the clearest footage of my arrest by @LASDHQ.

It's how I remember it — like being tossed around in the ocean and then slammed into rock pic.twitter.com/G3rfCR1NiI

The Washington Post subsequently asked the LASD if anybody there wanted to clarify its description of the incident. A spokesperson demurred, saying the incident was under investigation.

After two deputies were ambushed and shot, it's natural that the deputies would feel danger when somebody approaches them while they're arresting somebody. But they both overreacted, and then they attempted to cover up their overreaction.

This story isn't the only recent black eye to the LASD's reputation. Sheriff Alex Villanueva is fighting with L.A. County's Board of Supervisors of his department's lack of transparency and resistance to independent oversight. A whistleblower has filed suit against the department, claiming, among other things, that the Compton station was run by a secret gang called the Executioners and that the LASD is rampant with secret cliques of misbehaving deputies.

And L.A. County residents don't know the extent that the LASD is covering for misbehaving deputies, because the department has been dragging its feet rather than comply with new transparency laws that require the public release of records of certain types of police conduct. The Los Angeles Times is suing it for it failure to comply with the law.

None of this justifies, excuses, or explains why anybody would just walk up to two deputies and shoot them. Normally that would go without saying, but we're now in a culture where it needs to be said. But it's context that shows a crumbling relationship between a sheriff's department and the community it's supposed to protect. Misleading the public about an incident caught on video doesn't help repair that relationship.