David and Andrea Peterson didn't even participate in the rally—they just watched it. The students don't care. 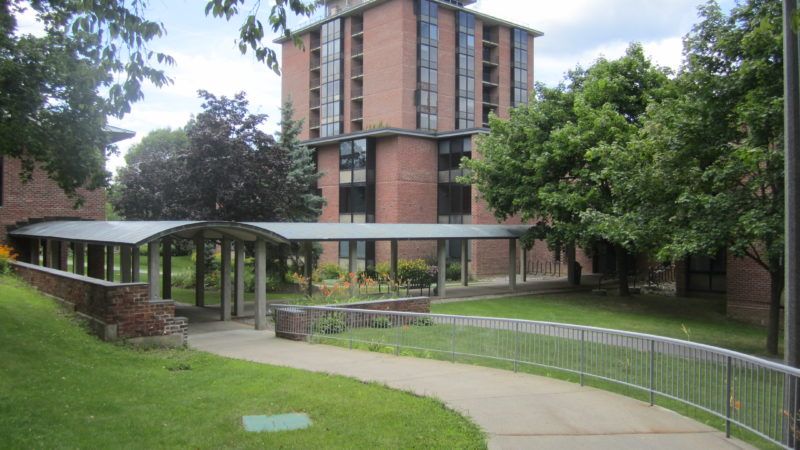 David Peterson is an art professor at Skidmore College, a private liberal arts college in Saratoga Springs, New York. In late July, the professor and his wife, Andrea Peterson, attended a "Back the Blue" rally—not as supporters of the cause, they say, but as curious spectators.

"Given the painful events that continue to unfold across this nation, I guess we just felt compelled to see first-hand how all of this was playing out in our own community," he later told the student newspaper.

They stood on the edges of event, watching pro- and anti-law enforcement demonstrators argue with each other. After 20 minutes, the Petersons left to eat dinner.

But unbeknownst to Peterson, the couple's attendance at the rally was noticed. Now Skidmore students are demanding that both Peterson be fired for "engaging in hateful conduct that threatens Black Skidmore students," according to Times-Union columnist Chris Churchill, who wrote about the controversy.

Andrea Peterson is not an employee of the college, according to Churchill.

"The Petersons weren't wearing pro-police T-shirts," notes Churchill. "They weren't carrying a banner, holding a sign or waving a black-and-blue flag. They appear to just be listening. But merely listening to an opinion that some Skidmore students find objectionable is apparently enough to get a professor in hot water."

Students have circulated their demands on social media, and even taped a note to the door of Peterson's classroom advising his students that they are "crossing a campus-wide picket line and breaking the boycott against Professor David Peterson." Peterson has attempted to make it clear that his presence at the rally did not constitute an endorsement of it; this matters very little to the students. An opinion piece in the student newspaper included his explanation, but still accused him of failing to "reconcile with his behavior." That piece also claimed that "there have been many claims of Mr. Peterson making students of color and queer students feel uncomfortable and unheard in his art classes prior to this," but did not elaborate.

"I still have no indication of how [David and Andrea Peterson] plan to take accountability for their actions and make their classrooms a safe space for our communities of color," wrote the student.

In any case, the boycott is evidently succeeding: Peterson said that most of his students have dropped his classes: Those who think the boycott is ridiculous are afraid to speak up, one student told Churchill. Skidmore's administration defended his free speech rights in a statement, but is nevertheless investigating the accusations of bias in the classroom.

If this is how they treat a professor who is insufficiently committed to their causes, one wonders how progressive students would treat a professor who holds ardently conservative views—or whether they could peacefully engage with another student, administrator, or any human being who disagrees with them. One gets the sense that a certain kind of liberal arts education is, for some extremely sensitive far-left students, no longer preparing them for the real world, or at least not in the sense this was traditionally intended. Indeed, the real world had better be prepared for them.