Damon Root | From the October 2020 issue 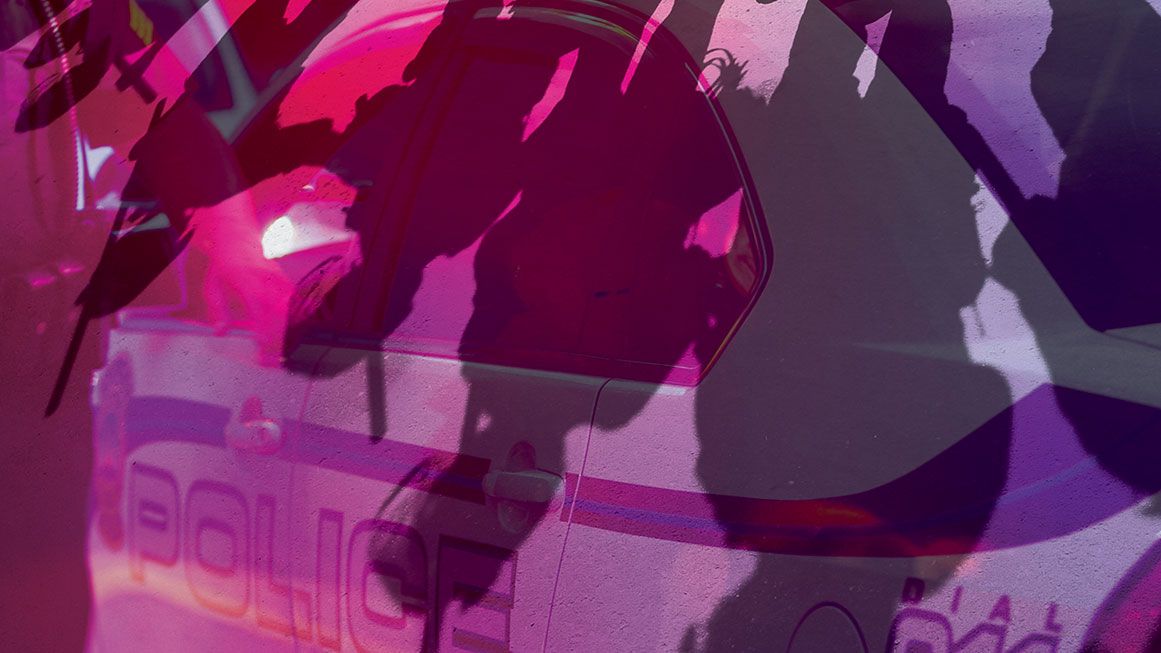 In this month's issue, we draw on decades of Reason journalism about policing and criminal justice to make practical suggestions about how to use the momentum of this summer's tumultuous protests productively. Check out Peter Suderman on busting the police unions, Jacob Sullum on ending the war on drugs, Sally Satel on rethinking crisis response, Zuri Davis on restricting asset forfeiture, C.J. Ciaramella on regulating use of force, Alec Ward on releasing body cam footage, Jonathan Blanks on stopping overpolicing, Stephen Davies on defunding the police, and Nick Gillespie interviewing former Reasoner Radley Balko on police militarization.

"As it stands in America today, the police aid in the trampling of rights on such a massive scale that there is hardly a word sufficiently descriptive. Limited liability? The price of retribution due to the victims of the crimes committed by police on any single day would be beyond calculation, yet not only do these crimes go undenounced (for the most part), and the perpetrators, police and politicians, unpunished, but, even worse, the victims are forced through taxes to finance the operation and salaries of the criminals."

In December 2017, the U.S. Court of Appeals for the 6th Circuit ruled that a former Ferndale, Michigan, police officer named Lowell Phillips violated the Constitution when he shot and killed a fleeing suspect. Laszlo Latits "showed a persistent intent to flee but not an intent to injure, and never placed the public or the officers at imminent risk," the court observed of the incident, which began with a traffic stop over a wrong-way turn onto a divided boulevard and ended four minutes later with Latits dead of multiple gunshot wounds to the chest and abdomen.

Phillips not only "repeatedly violated police procedures in both ramming Latits and running up to his car," the 6th Circuit noted, but Phillips was ultimately fired by the Ferndale police department for that misconduct. "Considering the totality of the circumstances," the appeals court noted, "we conclude that Officer Phillips's use of deadly force was objectively unreasonable and in violation of Latits's constitutional rights."

But then the 6th Circuit switched gears and shielded the disgraced ex-cop from facing a federal civil rights lawsuit filed by the dead man's family. "Caselaw existing at the time of the events," the court said, "did not clearly establish the objective unreasonableness of Phillips's actions in the circumstances of this case."

Welcome to the bizarro world of qualified immunity, a place where the federal courts will acknowledge that a police officer violated the Constitution but then deem the officer not civilly liable for his unconstitutional actions because there was no prior court decision explicitly frowning on the same behavior.

According to the U.S. Supreme Court's 1982 decision in Harlow v. Fitzgerald, state actors are entitled to immunity from civil suits arising from their official conduct so long as the conduct that they're being sued over "does not violate clearly established statutory or constitutional rights." But as 5th Circuit Judge Don Willett, a leading critic of the Court's qualified immunity doctrine, has complained, what that means in practice is that "public officials [may] duck consequences for bad behavior—no matter how palpably unreasonable—as long as they were the first to behave badly."

Something has gone seriously wrong in our criminal justice system when the federal courts are running this kind of interference on behalf of blatantly unconstitutional police actions. What happened?

The story begins in 1871. In the aftermath of the Civil War, numerous state and local officials throughout the former Confederacy turned a blind eye (or worse) to the racist domestic terrorism perpetrated by the Ku Klux Klan and other groups. Congress responded to this dire state of affairs by enacting a series of so-called enforcement acts, each one rooted in Section 5 of the recently ratified 14th Amendment, which gave federal lawmakers the power "to enforce, by appropriate legislation, the provisions of this article." Among the provisions of the 14th Amendment was the requirement that states respect the constitutional rights of U.S. citizens.

Perhaps the most forceful of the enforcement acts was the Civil Rights Act of 1871, also known as the Ku Klux Klan Act. Among other things, it sought to hold state officials personally liable for the widespread civil rights violations that were occurring on their watch. It did so in part by declaring that "any person who, under color of any law, statute, ordinance, regulation, custom or usage of any State, shall subject, or cause to be subjected, any person within the jurisdiction of the United States to the deprivation of any rights, privileges, or immunities secured by the Constitution of the United States shall…be liable to the party injured in any action at law, suit in equity, or other proper proceedings for redress."

"If the Federal Government cannot pass laws to protect the rights, liberty, and lives of citizens of the United States in the States," declared the bill's principal author, Massachusetts Rep. Benjamin F. Butler, a radical Republican and former Union major general, "why were guarantees of those fundamental rights put in the Constitution at all?"

Butler's handiwork lives on today in modified form in Section 1983 of Title 42 of the U.S. Code, more commonly known as Section 1983. It features language almost identical to the Ku Klux Klan Act.

Guess what the law does not say? "Neither version of the text, you will notice if you wade through them," University of Chicago law professor William Baude has observed, "makes any reference to immunity." That part came later, when the U.S. Supreme Court invented qualified immunity for cops in the mid-20th century.

It's common to think of Chief Justice Earl Warren as one of the towering figures of legal liberalism, a jurist whose record is practically synonymous with what progressives like to call social justice. In the approving words of The Oxford Companion to the Supreme Court of the United States, "Whether one looks at the Court's record in matters of free speech, separation of church and state, apportionment, racial discrimination, or criminal procedure, Warren and his Court essentially asked the same questions: Is this fair?"

Alas, fair is not exactly the word anyone would choose to describe what happened in Pierson v. Ray (1967), the case in which Chief Justice Warren more or less concocted the idea of qualified immunity for cops. At issue was the 1961 arrest of the Rev. Robert Pierson and several other civil rights activists for entering the "Whites Only" facilities at a segregated bus stop in Jackson, Mississippi. In 1965, in a different case, the Supreme Court ruled against the anti-loitering law those activists were arrested for violating. Two years later, the Court weighed a lawsuit, filed by Pierson and his allies under Section 1983, against the local authorities who wrongfully shackled and jailed them.

Writing for the majority, Warren safeguarded the Mississippi cops from the lawsuit. At common law, he argued, "a peace officer who arrests someone with probable cause is not liable for false arrest simply because the innocence of the suspect is later proved." The chief justice then grafted that reasoning onto Section 1983.

"A policeman's lot is not so unhappy that he must choose between being charged with dereliction of duty if he does not arrest when he has probable cause, and being mulcted in damages if he does," Warren declared. "Although the matter is not entirely free from doubt, the same consideration would seem to require excusing him from liability for acting under a statute that he reasonably believed to be valid but that was later held unconstitutional."

Fifteen years later, the Court doubled down in Harlow v. Fitzgerald. "Government officials are entitled to some form of immunity from suits for damages," the Court said. "Public officers require this protection to shield them from undue interference with their duties and from potentially disabling threats of liability." So long as government officials acting under color of law do "not violate clearly established statutory or constitutional rights of which a reasonable person would have known," the Court held, those officials "generally are shielded from liability for civil damages."

'An Absolute Shield for Law Enforcement'

The problems with qualified immunity are self-evident. Not only does the doctrine shield rights-violating officers from facing federal civil rights lawsuits, but it incentivizes police departments (which are also shielded from liability) to retain bad cops on the payroll. In effect, qualified immunity functions as an anti-accountability measure.

What can be done? There are two possible fixes. The first is for the Supreme Court to reverse or modify its misguided precedents.

At least two justices may be ready to do just that. The Court's "one-sided approach to qualified immunity," objected Justice Sonia Sotomayor in Kisela v. Hughes (2018), "transforms the doctrine into an absolute shield for law enforcement, gutting the deterrent effect of the Fourth Amendment." To make matters worse, "it tells officers that they can shoot first and think later, and it tells the public that palpably unreasonable conduct will go unpunished."

Justice Clarence Thomas, meanwhile, has suggested that the doctrine itself might be unlawful. In Ziglar v. Abbasi (2016), Thomas wrote a lone concurrence "to note my growing concern with our qualified immunity jurisprudence" and to urge the Court to "reconsider" that jurisprudence "in an appropriate case."

Earlier this year, when the Court declined to hear Baxter v. Bracey, a case involving the grant of qualified immunity to officers who allegedly unleashed a police dog on a surrendering suspect, Thomas blasted his colleagues for refusing to get involved.

Section 1983 "ma[kes] no mention of defenses or immunities," Thomas pointed out in his dissent. "Instead, it applies categorically to the deprivation of constitutional rights under color of state law." In other words, the judicially invented doctrine does not match the text enacted by Congress. "There is likely no [legal] basis for the objective inquiry into clearly established law that our modern cases prescribe," he wrote. "I continue to have strong doubts about our [Section] 1983 qualified immunity doctrine."

The other fix requires action from Congress and the signature of the president. Because this doctrine arose via the judicial interpretation of a federal law, federal lawmakers need only pass a new statute to expressly repudiate what SCOTUS has done.

That approach is slowly gaining adherents. "Qualified immunity protects police and other officials from consequences even for horrific rights abuses," observed Rep. Justin Amash (L–Mich.) when he introduced the Ending Qualified Immunity Act in the House of Representatives in June. Amash's bill had garnered 65 co-sponsors at the time this article went to press, though a majority of Senate Republicans have declared the idea dead on arrival.

The fight against police misconduct is fast emerging as one of the greatest civil rights issues of our time. Holding abusive officers civilly liable in federal court is a necessary and long-overdue part of that fight. One way or another, qualified immunity for cops deserves to be abolished.