Chen Guangcheng Fled China to America, and Last Night He Spoke at the RNC. How About Opening Our Doors to Oppressed Hongkongers Too?

"In China, expressing beliefs or ideas not approved by the CCP—religion, democracy, human rights—can lead to prison." 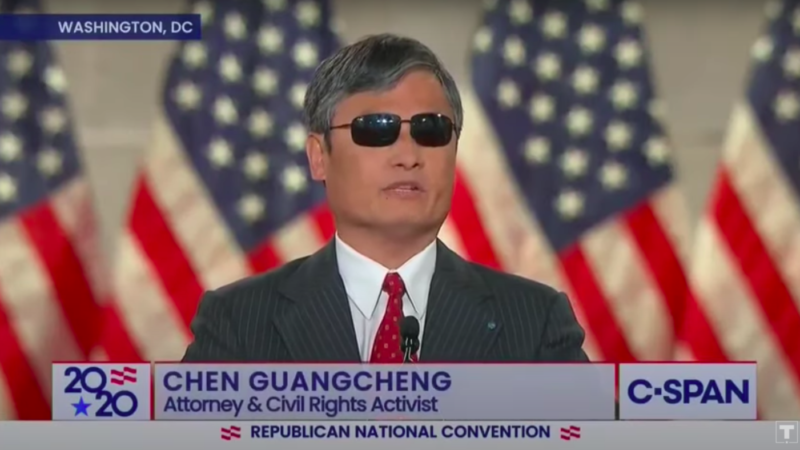 In an otherwise humdrum night of Republican National Convention (RNC) programming, Chinese dissident Chen Guangcheng, who escaped his home country in 2012, gave a speech that stood out.

Chen is a divisive figure among overseas dissidents and fellow critics of the Chinese Communist Party (CCP), but his story is a powerful one. In June 2005, he organized a class-action lawsuit against the authorities in Shandong province over the sterilizations and abortions that the government was imposing on citizens as part of the "one child" policy. Just months later, Chen and his family were imprisoned inside their home, where they were kept until the following year; Chen then began to serve a full-fledged prison sentence. On completing it in 2010, he was returned to further house arrest and further surveillance. Finally, in 2012, Chen sought refuge at the U.S. embassy, where he hid for several weeks; with the help of U.S. officials, he then fled to New York City with his wife and children.

In his speech last night, he told audiences how hard it is to stand up to tyranny. "When I spoke out against China's 'one child' policy and other injustices, I was persecuted, beaten, and put under house arrest," he said. "In China, expressing beliefs or ideas not approved by the CCP—religion, democracy, human rights—can lead to prison. The nation lives under mass surveillance and censorship."

He is right on all of those counts. The CCP is responsible for the brutal internment of the Uighur minority group, forced sterilizations and abortions, and crackdowns on speech and academic freedom in Hong Kong. The CCP has disappeared Hong Kong's booksellers, heavily regulated the internet to control what types of websites people can access via the "Great Firewall," and expelled foreign journalists and news bureaus to suppress the flow of information abroad. The Chinese government to this day scrubs references to its 1989 Tiananmen Square massacre from the internet. The list of ways the Chinese government systematically deprives its citizens of their rights—their ability to speak and write, create families of all sizes, access historical information, move about freely, agitate for change—goes on and on. Chen, a man who has been imprisoned by the state both in his own home and in a government facility, is immensely qualified to speak on this.

The candidate on whose behalf he was speaking, on the other hand, has failed to offer oppressed Hongkongers the most basic form of help: refuge. As my colleague Eric Boehm wrote in May, "With the freedom of Hongkongers under direct assault, the United States should throw open its doors to accept any of the city's residents who need a place to go."

This could take the form of asylum, a direct pathway to citizenship, or an expansion of visa programs to work or study in the U.S. Such an initiative could cover Hongkongers alone, or could be extended to mainland Chinese as well. The British government is already opening its doors to Hongkongers, and Australia has been flirting with following suit. Why are we so reticent?

In his speech, Chen remarked, "I'm forever grateful to the American people for welcoming me and my family to the United States where we are now free." Many more people ought to have that opportunity—and that's within the president's power to accomplish.