There is an underlying belief that the active presence of a police force of the kind we are familiar with prevents the explosion of crime. But history and modern criminology suggest otherwise. 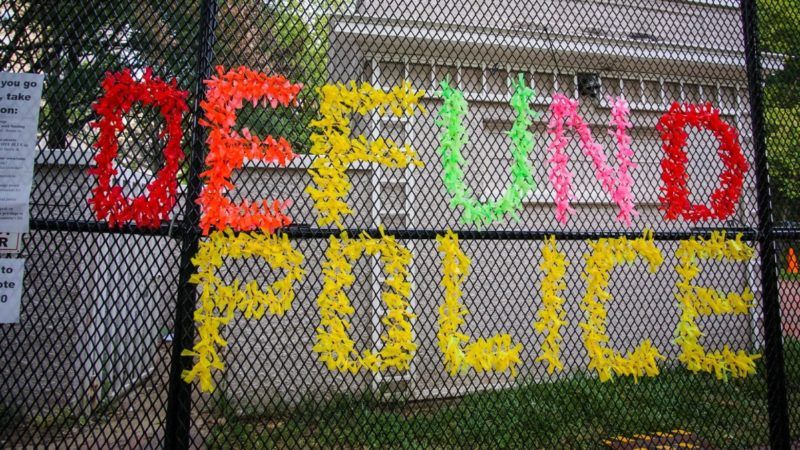 In this month's issue, we draw on decades of Reason journalism about policing and criminal justice to make practical suggestions about how to use the momentum of this summer's tumultuous protests productively. Check out Damon Root on abolishing qualified immunity, Peter Suderman on busting the police unions, Jacob Sullum on ending the war on drugs, Sally Satel on rethinking crisis response, Zuri Davis on restricting asset forfeiture, C.J. Ciaramella on regulating use of force, Alec Ward on releasing body cam footage, Jonathan Blanks on stopping overpolicing, and Nick Gillespie interviewing former Reasoner Radley Balko on police militarization.

The current wave of protest in the United States since the death of George Floyd has gone beyond familiar demands for changes in police tactics and punishments for officer misconduct to something altogether more radical. Increasingly, the goal is for police departments in major cities to be "defunded." At the very least, this would mean a serious rethinking of the current model of American policing and a significant redirection of public spending to other ends. In its more extreme variants, it would mean much more: a move away from the very idea of a public police force, uniformed, permanent, paid for through taxation, and possessed of powers not enjoyed by ordinary citizens.

This would not just represent a change in policing methods and the pattern of government spending; it would be a revolutionary rejection of what for 200 years has been a core capacity and function of the modern state. The immediate response of most to this idea is that abolishing the existing system in this way would lead to an explosion of criminality and violence. The underlying belief is that it is only the active presence of a police force of the kind we are familiar with that stops such an explosion from happening. But history and modern criminology suggest otherwise.

Calls to defund the police are being made across the United States. In Minneapolis, where the current wave of protests began, the City Council's majority has committed to a strategy, already advocated by some local community organizations, of a version towards the radical end of the suggestions. In Los Angeles, the suggestion is to reduce the city's police budget from 51 percent of general fund spending to 5.7 percent.

The push for defunding has been triggered by specific incidents and growing frustration at a trend involving deaths at the hands of police officers following arrests or confrontations over minor matters. However, that particular concern derives from a more general discontent (also growing) with the way the entire policing and law enforcement system works. This critique has several aspects. The first is simply the cost of policing in contemporary America. A recent report calculated that total annual police department spending in the U.S. amounts to $115 billion. In Minneapolis, police spending accounts for 30 percent of the total budget. In Los Angeles, the 51 percent of spending accounted for by the Los Angeles Police Department (LAPD) comes to $1.8 billion a year. These are not small amounts—and the cost has been rising steadily even as crime has been declining sharply since the middle of the 1990s.

The discontent goes beyond mere cost, however. It relates to the whole style and philosophy of policing on display in most U.S. metropolitan areas and beyond. As The Washington Post's Radley Balko has pointed out, the last few decades have witnessed a militarization of U.S. policing to the point where large urban police forces are equipped like, and too often behave like, an occupying army (without the military training). This has much greater consequences because of two other developments, which in turn grow out of the philosophy and vision that has driven much U.S. policing since its creation in the mid–19th century.

The first development is the use of the police as an agency for moral and social policy. This includes enforcing the laws against nonviolent, consensual crimes (e.g., the war on drugs) and dealing with local community or public health problems (e.g., mental health issues and domestic abuse). The second development is the growth of "broken windows" policing, a strategy where officers aggressively address minor infractions of the law, such as vandalism, often with maximal force. This is the contemporary version of "proactive" or "preventative" policing, a strategy that has been tried in places around the world since it was first advocated at the end of the 18th century—virtually always with bad results. This kind of policing brings militarized police officers into regular contact with members of the public. Not a random selection of the public, though; members of disadvantaged groups (typically African Americans and other minorities, but also poor whites) are disproportionately affected. This in turn leads to often violent confrontations and a policing policy that, instead of preserving public order and safeguarding communities, actively disrupts order and escalates violence in communities.

What does "defunding" mean in practical terms? One consistent element is that much current spending on police should be redirected elsewhere. The more moderate proposals call for either large cuts to existing budgets or for the existing department to be replaced by a new and smaller one (with different personnel). The most radical idea is that the entire police system should be scrapped and replaced by some other mechanisms for maintaining public order. Importantly, different entities (either public or private) would be tasked with dealing with minor rules infractions on the one hand and handling serious or violent crime on the other. This idea calls the whole notion of policing as a central function of the state into question.

The immediate response to these ideas, and particularly the last one, is often that they are preposterous. Most people believe that getting rid of the police force in its present form would lead to immediate chaos. Advocates of defunding are at pains to explain that they are talking not about shutting down departments overnight but about a process to redefine the policing function, with one method of maintaining social order replaced by another. Yet these explanations tend to fall on deaf ears.

One reason has to do with widespread beliefs that serious crime is much more prevalent than it really is and that dealing with it is the main function of a police force. Neither is true. Pew Research Center reports that 60 percent of the American public believes crime is higher today than a year ago, even though FBI and Bureau of Justice Statistics data show that it has been declining steadily since 1993. Meanwhile, studies have consistently found that police spend only about one-fifth of their time dealing with actual crime.

Because the actual main purpose of the uniformed police is enforcing rules and maintaining order in public places, these misconceptions can have knock-on effects. For the most part, people recognize that most of their peers are law-abiding and peaceful, but they also tend to believe there is a large minority who are not. This minority is often identified with a particular social group (the Irish; inner-city African Americans; etc.). In such cases, the public order aspect of policing will disproportionately be directed at these groups. The (usually unspoken) fear is that if this surveillance is removed, the disorderly minority will erupt. Fortunately, we have historical evidence demonstrating that this is not so.

One way to corroborate this claim is to look at police strikes, which offer a kind of natural experiment: If police stop working, we can see whether it leads to a sudden spurt of opportunistic predation and lawlessness. The answer is sometimes yes—but only on a small scale—and in most cases not at all.

In 1853, there was a series of what were effectively strikes by police forces in towns in the North of England, including Manchester, Hull, and Preston. In Manchester, two-thirds of the police simultaneously resigned. It took weeks for the dispute to be resolved. Until it was, there was no effective police force in the city, yet crime did not increase. The same pattern was found in the other Northern towns such as Hull and Preston.

A whole series of police strikes occurred in various U.S. cities between 1967 and 1983. These included walk-outs in Detroit, New York, Baltimore, San Francisco, Cleveland, New Orleans, and Milwaukee—plus no fewer than 10 separate disputes in Cook County, Illinois. In several of these, the strike lasted for several days or longer. None saw a significant increase in crime, according to contemporaneous news reports.

In New York in 1971, according to the Associated Press, "there has been no apparent rise in crime since the walkout." In New Orleans in 1979, "there was no apparent increase in crime during the walkout." In San Francisco in 1975, "the strike left the city short of protection, but no major upswing in crime was reported." In Toledo, Ohio, in 1975, "the first day of the walkout passed without reports of violence in this city of 370,000 persons." And in Cleveland in 1978, "the strike had no immediate effect on the city, except for flocks of prostitutes who openly flaunted their wares in the muggy summer weather—even stepping into the streets to flag down passing motorists."

There have been strikes that were associated with looting, such as Melbourne, Australia, in 1923 and Liverpool, England, in 1919. But this was limited: No general increase in crime resulted.

Order is what makes a free society possible. But there are many ways of preserving order and protecting persons and property that do not require a centralized police force, much less the aggressive paramilitary-style policing that has become so common in the United States. In the U.K., prior to the County and Borough Police Act (which made local police departments compulsory in 1857), many areas did not have a paid public police force. Instead, they relied on action by private individuals (under the terms of the 1285 Statute of Winchester) or collective voluntary action by locals, through "associations for the prosecution of felons." They did not experience crime or disorder at higher levels than areas that did have police.

Society needs a dedicated professional organization to investigate and deal with serious and organised crime, as advocates of "defunding the police" generally acknowledge. These tasks, however, are only a small part of what police departments do. Many of the offenses dealt with by police are nonviolent activities, such as drug use, that criminal law should have no say over. Other tasks—like maintaining orderly behavior in public places and enforcing traffic rules—do not require an armed force with powers of arrest. Mental health, domestic abuse, and neighborhood nuisance calls are better dealt with using health care and social work professionals and the civil courts.

The police clear-up rate for minor crimes such as burglary, theft, and criminal damage is staggeringly low. This is not surprising: Officers face a very acute knowledge problem, since the information they need is tacit and dispersed among the people in a locality. Rather than expecting a professional bureaucracy to be able to ferret it out, it makes more sense to have a community organization that draws upon and pools local information, involving the people most directly affected by the disorderly conduct of a minority of individuals.

Proposals for defunding American police departments grow out of an increasing impatience with the type of policing that is predominant in the United States. Despite the knee-jerk resistance, this is not an unreasonable idea, and effecting it in a measured way would not—as far as we can tell from recent and historical evidence—lead to a violent explosion of the kind that many fear. Some police officers are talking of resorting to strike action in response to the defunding proposals. The record suggests this could help people realize how little they're actually needed.

Stephen Davies is head of education at the Institute of Economic Affairs in London.