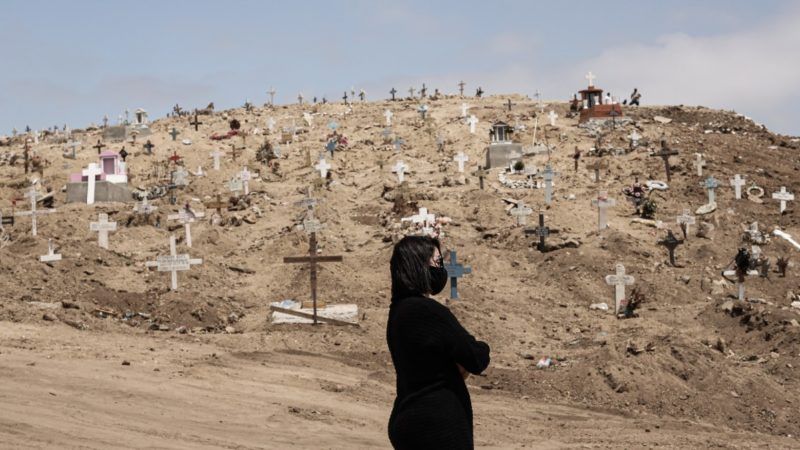 When the Mexican legislature meets this fall, it is poised to pass a marijuana legalization bill. The legislation will legalize cannabis for all uses—recreational, medical, industrial—and will create a Mexican Cannabis Institute to grant licenses for the cultivation, processing, sale, import, export, and research of marijuana. The country's president and ruling political party have both endorsed the initiative, and it has already been approved by three Senate committees.

The bill's backers hope it will curb the influence of Mexico's drug cartels. Marijuana accounts for upwards of half of the cartels' revenues, which are estimated to range between $20 and $50 billion dollars annually.

The past year has been the bloodiest yet in Mexico's war against the cartels. When security forces in the city of Culiacan tried to arrest the son of drug lord El Chapo Guzmán in October 2019, they found themselves outnumbered and outgunned by the Sinaloa Cartel. In June, gangsters ambushed Mexico City's police chief with 400 rounds of ammunition from semi-automatic rifles; in July, cartel gunmen massacred 26 residents of a drug rehab center in Guanajuato.

In the past decade, Mexico has suffered 250,000 homicides because of the drug war. Whole swaths of the country are now controlled by organized crime, including the states of Guerrero, Michoacan, Morelos, and Tamaulipas. The Jalisco New Generation Cartel (CJNG) has killed more than 100 officials in the state of Jalisco alone, including federal, state, and local policemen, soldiers, mayors, and city council members. In June, it killed a federal judge and his wife. A U.S. Army Intelligence report estimates that over a six-year period, 150,000 of the Mexican army's 250,000 soldiers deserted, finding higher wages in the drug industry.

As Mexico's president from 2000 to 2006, Vicente Fox was a dutiful foot soldier in Washington's War on Drugs. But now Fox has been telling Time magazine that we should end prohibition "to take all the production chain out of the hands of criminals."

Drugs, Fox added, are "bad for your health, and you shouldn't take them. But, ultimately, this is the responsibility [of] citizens."

Fox has been for legalization for a while. "We should look at it as a strategy to strike at and break the economic structure that allows gangs to generate huge profits in their trade, which fuels corruption and increases their areas of power," he wrote from his ranch in 2010. A decade later, he hopes this marijuana bill will be the first step toward legalizing all drugs.

Mexico is the latest in a series of Latin American countries to reject the U.S.'s approach to drug policy. Uruguay sits on a transit route for marijuana and cocaine. When Jose Mujica was elected president there in 2009, he cast a wary eye on the drug cartels that had taken control of nearby Paraguay. He knew they could easily seize Uruguay as well.

One of Mujica's first initiatives was to legalize marijuana, anticipating that all drugs might eventually follow. Latin American presidents had held back from legalization out of fear of retaliation by the United States. But by this time, several states in the U.S. had liberalized their marijuana laws. That helped give Latin Americans cover to opt out of the drug war themselves.

In 2009, the Argentine Supreme Court declared in a landmark ruling that it was unconstitutional to prosecute citizens for possessing drugs for their personal use. And in 2012, Colombia's president, Juan Manuel Santos, suggested that the legalization of all drugs might be in order. Two years later, his country eased its prohibitionist stance by ceasing aerial fumigation of the coca crop. Four years after that, Colombia's Constitutional Court legalized recreational cannabis.

The insurgencies that have terrorized Colombia for decades have all been fueled by the illegal drug trade, says Daniel Raisbeck, who ran for mayor of Bogotá, Colombia, in 2015 and is a senior fellow at the Reason Foundation (which publishes this magazine). In 1979, the Revolutionary Armed Forces of Colombia (FARC) were militarily irrelevant, with a rag-tag army of around 800 troops. But in 1982, it made the strategic decision to take part in the drug trade. The FARC very quickly became very rich. By the end of the 1990s, it had around 20,000 troops.

Raisbeck himself lost a family member when the Medellín Cartel shot down a Boeing 727 passenger aircraft in 1989— in an attempt to assassinate a presidential candidate who was supposed to be on board. "This was but one of the many senseless, ruthless, and vicious acts of terror that I remember from my childhood," Raisbeck wrote in 2014.

Pedro Trujillo, a professor of international relations at Universidad Francisco Marroquín in Guatemala City, lost two brothers to heroin overdoses. Trujillo thinks they might have been alive to this day if there had been clinics where his brothers could take safe, legal doses of the drug while getting addiction counseling. Trujillo proposes "legalization in combination with education about the dangers of drug use."

Latin America's wave of support for legalization comes at a time when there is growing skepticism in the United States about the drug war's efficacy, even among conservative lawmakers. In 2019, 91 Republicans joined 229 Democrats to pass legislation that gave marijuana businesses full access to the American banking system.

The drug war's beneficiaries have been armed criminals, from the FARC to the Mexican cartels to the Taliban. When Prohibition ended in 1933, so did much of the criminal violence that haunted the United States during the Prohibition era. Latin Americans have good reason to think the same thing will happen in their countries if they end narco-prohibition.

Robert Carle is a professor of theology at The King's College in Manhattan.