Trump on QAnon Conspiracy Theorists: 'They Like Me Very Much, Which I Appreciate'

The president said he doesn't know much about the movement but he's heard its adherents "love our country." 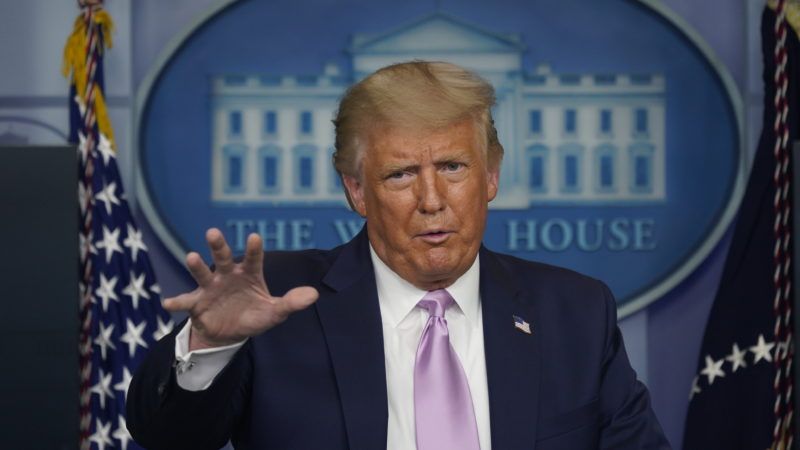 At a press conference today, Donald Trump was asked about the QAnon, a loose assortment of conspiracy theorists who think the president is waging a secret war against an international ring of Satan-worshipping Deep State pedophiles; the evil cabal purportedly includes various Hollywood celebrities, media figures, and Democratic Party leaders. Trump responded that he didn't know very much about the QAnon movement, but he was grateful for the support.

"They like me very much, which I appreciate," he said.

The president then downplayed QAnon's kookiness, wrongly portraying its adherents as merely concerned about crime in Democrat-run cities.

"These are people who don't like what's going on in places like Portland, and Chicago, and other cities, and states," said Trump. "I've heard these are people who love our country. I don't know anything about it other than, they do supposedly like me, and also would like to see problems in these areas go away."

Lest anyone claims that Trump's ignorance is a defense, the reporter who asked the question then explained that the essential element of the QAnon theory is the Satanic cannibal pedophile part—and that Trump is supposedly at the center of a covert effort to stop this great evil.

"Is that supposed to be a bad thing or a good thing?" Trump responded, prompting at least one laugh. "If I can help save the world from problems, I'm willing to put myself out there."

.@realDonaldTrump asked about 'QAnon' --- "They like me" and "love the country" pic.twitter.com/STeZOG1jRa

It would be trivially easy for Trump to distance himself from an insane conspiracy theory, just as it would be trivially easy for the GOP to shun Laura Loomer, the bigot who just got the party's nomination for a congressional seat in Florida. Instead, prominent Republicans—including Trump—have endorsed Loomer, and Trump is happy to collect the Q vote. They may be kooks, one imagines Republicans thinking, but at least they're our kooks.