A Coronavirus Bailout Won't Save (or Fix) the USPS

The postal service stands to lose $13 billion this year. But this is an ongoing trend, not a new problem created by the coronavirus pandemic.

Eric Boehm | From the August/September 2020 issue 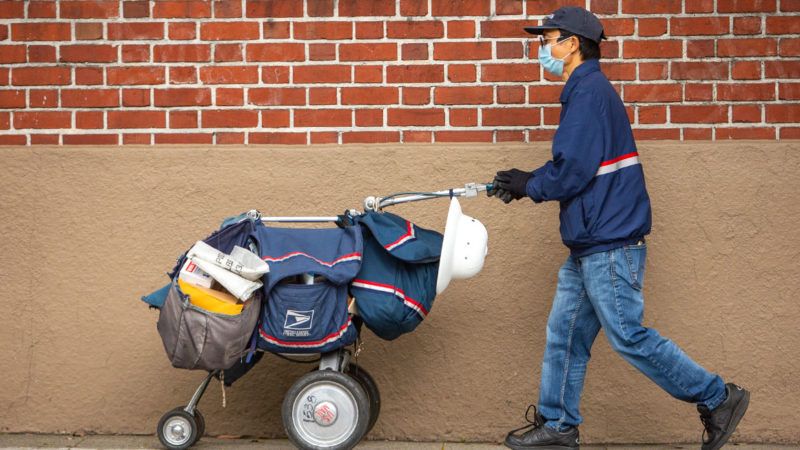 Congress has proposed a $25 billion bailout for the U.S. Postal Service (USPS) as part of the latest COVID-19 stimulus bill, but it's unlikely that any amount of cash will be enough to stabilize the agency's finances. Postmaster General Megan Brennan told the House Oversight Committee in April that the postal service stands to lose $13 billion this year. That's an acceleration of an ongoing trend, not a new problem created by the coronavirus pandemic; the post office has lost $69 billion since 2007.

In May, a report from the Government Accountability Office called the agency's business model "not financially sustainable"—a conclusion it had reached before the impact of the coronavirus was factored in. The report called for Congress to make changes to "critical foundational elements" of how USPS operates. In other words, COVID-19 might be an easy scapegoat to justify a federal bailout, but the pandemic is not the main problem, and a bailout would not be a permanent solution.

Thanks to congressional mandates, the USPS has been unable to adapt to a changing marketplace. First-class mail has declined 44 percent since 2006, but Congress has rejected proposals that would free the postal service to operate more like a business, instead requiring the agency to deliver mail everywhere six days per week regardless of cost efficiency.

Second, like many government entities, the USPS has overpromised and undersaved when it comes to employee retirement benefits. At the end of 2019, the postal workers' pension fund had $50 billion in unfunded liabilities—the gap between what the fund expects to owe beneficiaries over the long term and the revenue it expects to collect from paychecks and investment earnings. Meanwhile, the fund that covers health care expenses for retired postal workers is facing a $69 billion unfunded liability. The pandemic's economic impact has made both situations worse.

President Donald Trump has called for the USPS to raise prices, particularly on packages. He believes the agency is giving a free ride to Amazon and other online retailers. USPS has already tried that—the shipping price for the agency's largest flat-rate box has gone from $14.50 in 2010 to $21.10 this year, for example—but price increases are limited by market conditions (since the USPS does not have a monopoly on package shipments) and congressional mandates.

Rather than more bailouts or slightly different mandates, Congress should set the postal service free. Privatizing it in whole or in part would allow the USPS to make smart changes to its business model while guaranteeing that taxpayers aren't on the hook for yet another massive bailout in a year or two.