A life of built-in social distancing looks better than ever.

J.D. Tuccille | From the August/September 2020 issue 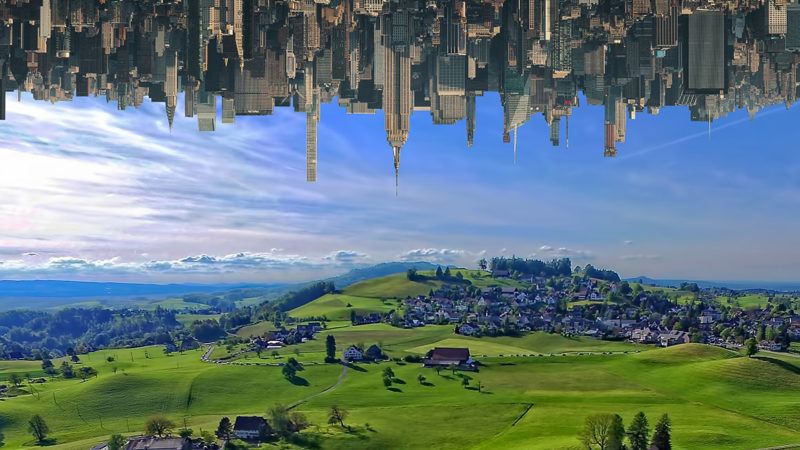 Cities have a lot of pluses, including their tendency to be dynamic, creative, and vibrant. They're also crowded. Dynamism, creativity, and vibrancy are partially a result of those crowds, but that density became a source of anxiety when COVID-19 started spreading. Those anxieties have been amplified by the protests, looting, and urban unrest that began in late May. Their legacy may reset the long-running city vs. country feud as Americans reconsider the allure of open spaces where social distancing is a regular part of life.

"For years, urban planners have been singing the praises of population density," Steven Greenhut wrote in a mid-pandemic Orange County Register column. "Yet after the dust clears from the lockdowns, more Californians will likely be tempted to rethink the high-density status quo. Obviously, diseases spread more quickly where people live cheek by jowl."

Across the continent, urbanist Joel Kotkin agreed. "What's particularly ominous for New York's future is that the best way to slow the spread of the virus—social distancing—works against the very things that make Gotham so appealing," he noted in Tablet magazine. "The very pleasures and crowded realities of urban life, such as mass transit, are particularly susceptible to pandemics."

While it's early, The New York Times reports evidence of residents "making moves to leave the city, not for short-term stays in weekend houses, as was common when the pandemic first arrived, but more permanently."

That adds to a preexisting exodus, with Chicago, Los Angeles, and New York—America's largest metro areas—losing population in recent years. The high cost of living had already tarnished urban life. Health fears and lockdowns are an extra push toward the exit.

Depending on where they end up, urban refugees may find the problems, such as opiate addiction and economic distress, that the media tell them plague less-dense areas. But new residents will also discover that many of the ills are overstated. Among the oddities of American life is that rural counties are perpetually tagged as underperforming because once they find success, they lose their "country" status.

"Official definitions are regularly updated in such a way that rural counties are continually losing their most successful places to urbanization," The Washington Post noted last year. "When a rural county grows, it transmutes into an urban one."

And there are always opportunities for growth. While the entrepreneurship gap has closed, the Small Business Administration reported in 2017 that "the rate of self-employment has remained higher in rural areas than in other areas."

That doesn't mean that urban refugees must necessarily hang out their own shingles, though. The fears driving people to reconsider the attractions of urban life are also—finally!—normalizing the use of the internet for telecommuting, not just for yelling at people on Twitter.

"Our best estimate is that 25–30 percent of the workforce will be working from home multiple days a week by the end of 2021," predicts Kate Lister, president of Global Workplace Analytics.

For many people, then, exchanging a high-rise for a house doesn't necessarily require changing jobs. But a move does mean a change in culture. Life under an open sky is inherently different from life in a city that never sleeps. Rural dwellers tend to rise and turn in earlier than urbanites, they generally enjoy different hobbies, they often have different values, and—important in a country that turns everything into a political death match—they vote differently.

In recent years, country dwellers have turned overwhelmingly Republican while city residents have become strongly Democratic. After votes were counted in 2019, CityLab reported that "election results show how America is continuing to polarize along an urban-rural continuum." While ex-urbanites may carry their politics with them to their new digs, the reverse could also be true. "The urban-rural political divide…is rooted in geography and not merely differences in the type of people living in these places," researchers at Washington University in St. Louis announced earlier this year.

Rural-dwelling telecommuters, with colleagues scattered over the map, may find a way to bridge the gap. Choosing a new way of life and meeting the neighbors while maintaining contact with old friends could break down the sense of us vs. them and teach more of us to live and let live.

One way or another, we'll likely find out. A post-pandemic, post-riot world is one in which less-dense living looks a lot more attractive.