Let there be musics.

Founded in riot-wrecked Detroit in 1969, Creem magazine became a showcase for a snotty new style of rock-and-roll writing that combined love of its subject with the mocking irreverence of the music itself. A number of noted writers passed through the magazine's editorial bullpen—Nick Tosches, Chuck Eddy, Greil Marcus, Cameron Crowe. But in a rousing new documentary called Creem: America's Only Rock 'n' Roll Magazine, the focus is mostly on two of them: Dave Marsh, hired by publisher Barry Kramer right off of a student newspaper at Wayne State University, and Lester Bangs, a walking provocation who moved to Detroit from small-town Southern California in 1971 in continuing search of a creative berth in the roiling counterculture.

Marsh and Bangs were born to butt heads. Marsh prized rock music for its political possibilities; the eloquently dizzed-out Lester was in it for the fun. Looking back on their contentious relationship, Marsh says of Bangs, not unkindly, "people confuse sad and funny a lot." Lester's recollections of Marsh, with whom he once got into an actual office fistfight, are now unavailable: He died in 1982 from over-consumption of prescription drugs (of the unprescribed variety) and cough syrup.

Although Creem was aimed at adolescent boys, the documentary makes room for female editors like Jaan Uhelszki (a coproducer of the film) and Susan Whitall, and for the melancholy story of publisher Kramer, a head-shop entrepreneur who built a magazine out of nothing to rival the dominant Rolling Stone, but was finally brought down by the counterculture drug scene (which he departed in a nitrous-oxide haze in 1981).

But it's Bangs who's portrayed as the embodiment of the magazine's out-of-control spirit. There seemed to be nothing he wouldn't say in print. He suggested that Steven Tyler's pregnant girlfriend Bebe Buell should get an abortion (she didn't, and later gave birth to Liv Tyler). He mocked the records of such Detroit natives as Alice Cooper ("a tragic waste of plastic") and even the MC5 ("this ridiculous, overbearing, pretentious album").

And then there was Lou Reed, with whom Lester had some hilariously hostile interactions. In one piece, he wrote that the former Velvet Underground leader was "living off the dumbbell nihilism of the seventies generation that doesn't have the energy to commit suicide." (Said Lou, on another occasion: "You're kind of onomatopoeic in a subterranean reptilian way.") "Lou Reed and Lester brought out the legend in each other," says Cameron Crowe, who made Lester a character in his 2000 movie Almost Famous.

"Nobody watched their words," says Uhelszki of those old days. "I think if you had put it through that politically correct filter you would have lost 60 percent of what made Creem great." A parade of stars passes through the film testifying to the magazine's importance to their younger selves: Thurston Moore, Suzi Quatro, Ted Nugent, Handsome Dick Manitoba. And Uhelszki still marvels at the fact that a crew of clueless kids could somehow create a hip national magazine in what was thought to be the cultural wilderness of the industrial Midwest. "We were so young we didn't know we couldn't do it," she says.

Creem: America's Only Rock 'n' Roll Magazine can be rented here for $9.99 at eventlive.org.

Jazz on a Summer's Day 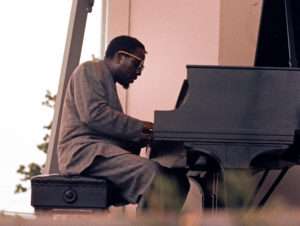 The pleasures of this great concert documentary—filmed at the 1958 Newport Jazz Festival and now re-released in a rich 4K restoration—seem more abundant than ever, and its few problems a little bit less problematic.

Will there ever be a more electrifying gospel performance than the Mahalia Jackson reading of "The Lord's Prayer" that we see here? Will another concert film ever offer anything to match the soaring ebullience of pianist George Shearing, driven on by mad conga, marimba, and timbale rhythms, block-chording his way through "Rondo"? Or Dinah Washington, at the peak of her vocal artistry, stepping away from the mike during "All of Me" to take up a pair of mallets and slip in beside vibes player Terry Gibbs for a free-form duet? Will any other singer ever be cooler than Anita O'Day, in high heels, white cocktail gloves and a giant feathered sun hat, scatting her way through "Tea for Two"? And who will ever equal the radiant trad simplicity of Louis Armstrong and Jack Teagarden's duet on Hoagy Carmichael's "Lazy River"?

One of the film's many high points is the moment when we hear the opening guitar riff in Chuck Berry's "Sweet Little Sixteen"—what's that doing here? —and then see Berry himself up onstage, fronting one of the world's unlikeliest backing bands, a group of non-rock gentlemen led by trombonist Teagarden, who looks benignly amused. Things don't go well at first—Berry is trying to carry everything by himself and his playing is sloppy. But then the drummer, Jo Jones, gets into it with a big smile on his face, and Rudy Rutherford jumps in for a few wailing choruses on his clarinet—and suddenly the whole ungainly exercise takes off.

Jazz on a Summer's Day has sustained some critical hits over the past 60 years. The director, Bert Stern, was a much-in-demand commercial photographer who had never made a film before (and never would again). He might have been distracted by the annual America's Cup yachting tests that were taking place off of Newport at the same time as the jazz festival was happening—we get many shots of sailboats scudding across the water, their spinnakers ballooning in the breeze, and they're undeniably beautiful. But anyone who comes to this movie for the music will be at least a little irked when they see Thelonious Monk up onstage, in his bamboo bebop shades, slipping into "Monk's Blues" —for approximately one minute,  before Stern cuts away for more boating b-roll.

According to jazz critic Gary Giddins, it quickly became clear that Stern was in over his head, and so the film's editor, Aram Avakian, was elevated to co-director in order to exert some necessary control. The treatment of Monk remains an infuriating aspect of the film, and no one will be wasting any affection on the obviously staged sequences (the fake house party, the Dixieland band chugging around town in a vintage jalopy). But at 60 years' remove, these flaws have taken on a time-capsule charm. And the music hasn't aged a day.

Jazz on a Summer Day is streaming at Kinomarquee.com