The overturned law would have required confiscating all magazines holding more than 10 rounds in California. 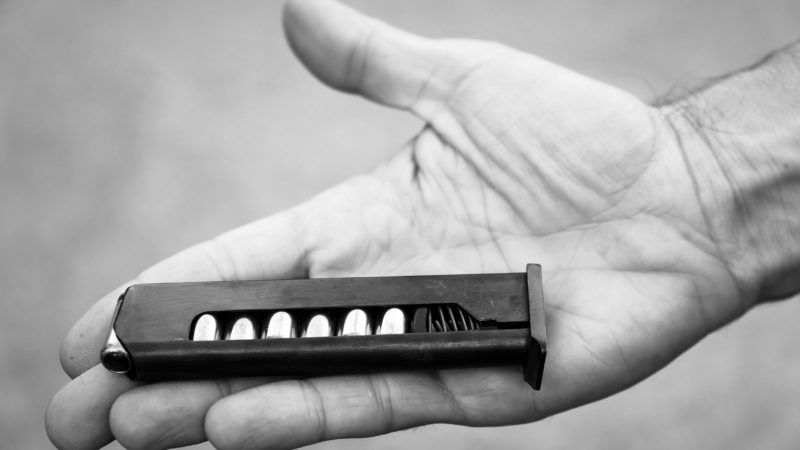 The 9th Circuit Court of Appeals, in a 2-1 panel decision, today upheld a lower court's shutting down of California's ban on gun magazines that hold more than 10 rounds, so-called "large capacity magazines" (LCMs).

The decision in the case of Duncan v. Becerra upheld a district court decision for summary judgment against the state of California from March 2019. The law barring LCMs as currently amended was a result of Proposition 63 in 2016.

Because of this lawsuit, initially filed just before the newest iteration of the LCM ban went into effect, the state has been legally enjoined from actually enforcing it. Now the 9th Circuit says it should never be able to. The law, if applied, would have demanded confiscation or destruction of all the tremendous number of previously legal LCMs in Californians' hands.

The District Court had decided there was "no genuine dispute of material fact that section 32310 violates the Second and Fifth Amendments of the United States Constitution, and ordered summary judgment for the [LCM] Owners" who were suing the state. The 9th Circuit Court of Appeals today agrees with that conclusion.

Judge Kenneth K. Lee wrote today's 9th Circuit panel decision, in which he was joined by Judge Consuelo Callahan. The judges concluded that barring citizens from owning and using more than half of the magazines for sale in the United States, ones that come along with a wide variety of commonly purchased handguns, strikes to the core of the Second Amendment right to own arms for self-defense, since the LCM ban barred possession of a self-defense tool commonly used for lawful purposes.

For some perspective, Judge Lee notes that "from 1990 to 2015, civilians possessed about 115 million LCMs out of a total of 230 million magazines in circulation….Today, LCMs may be lawfully possessed in 41 states and under federal law."

In buttressing the significance of the self-defense right the Second Amendment enshrines, Judge Lee discusses

Perhaps the most poignant and persuasive reminder of the fundamental right to self-defense…the denial of that right to Black Americans during tragic chapters of our country's history….Post-Civil War state legislation and the Black Codes in the South deprived newly freed slaves of their Second Amendment rights…Meanwhile, armed bands of ex-Confederates roamed the countryside forcibly disarming and terrorizing African Americans….Our country's history has shown that communities of color have a particularly compelling interest in exercising their Second Amendment rights. The Second Amendment provides one last line of defense for people of color when the state cannot — or will not — step in to protect them.

Women and "members of the lesbian, gay, bisexual, and transgender (LGBT) communities" are also singled out in the decision as often needing a vigorously defended right to bear arms. "The Second Amendment is not a relic relevant only during the era of Publius and parchments," Judge Lee declares. "It is a right that is exercised hundreds of times on any given day."

Our current strife-torn nation might make this point of Judge Lee's especially resonant: "Law-abiding citizens trapped in high-crime areas where
the law enforcement is overtaxed may defend themselves in their homes with a handgun outfitted with LCMs. And in incidents of mass chaos and unrest, law enforcement simply may be unable to protect the people, leaving them solely
responsible for their own safety in a seemingly Hobbesian world."

Relying on language and reasoning in the Supreme Court's dominant Second Amendment decision, 2008's Heller case, the judges found no reason to consider LCMs to be unusual, or to conclude the magazine ban is the sort of longstanding regulation on arms that should be granted deference as presumptively lawful. Some such laws would include, Judge Lee writes, those that bar "possession of firearms by felons and the mentally ill" and "prohibitions on carriage in sensitive locations, and conditions or qualifications on the commercial sale of firearms."

The judges granted the state interest the law supposedly furthered qualified as compelling. Still, the LCM ban was not appropriately "narrowly tailored" toward achieving that interest, since the magazine ban was not "the least restrictive means" toward that goal.

Despite not being guns, the panel finds that magazines are an essential element of a gun serving its self-defense function. "Firearms or magazines holding more than ten rounds have been in existence — and owned by American citizens — for centuries. Firearms with greater than ten round capacities existed even before our nation's founding, and the common use of LCMs for self-defense is apparent in our shared national history," Judge Lee writes, and the decision provides many pages of historical examples to prove this point.

The 9th Circuit's panel decision also explored the tricky and complicated question of what level of scutiny to apply to the law's impingement on Second Amendment rights, concluding that "strict" scrutiny was appropriate. As Judge Lee wrote, "If a challenged law does not strike at the core Second Amendment right or substantially burden that right, then intermediate scrutiny applies….Only where both questions are answered in the affirmative will strict scrutiny apply." And as above, they did find the LCM ban both strikes at the core of the right, and substantially burdens it.

Even if the 9th Circuit panel had been less restrictive in their scrutiny standard, Judge Lee said the law would have failed even "intermediate scrutiny" since "while the interests expressed by the state qualified as 'important,' the means chosen to advance those interests were not substantially related to their service." Judge Lee points out the state's attempts to defend the idea that the LCM law would in fact prevent important public harms were poorly argued and provided little hard evidence that any past actual harms would have been prevented by application of the law.

Judge Lee insists that "Our decision today is in keeping with Ninth Circuit
precedent. While we have not articulated a precise standard for what constitutes a substantial burden on core Second Amendment rights, we have consistently stated that a law that bans possession of a commonly used arm for self-defense — with no meaningful exception for law-abiding citizens — likely imposes a substantial burden on the Second Amendment." Judge Lee notes the 9th Circuit has seen fit to apply merely intermediate scrutiny to laws that merely barred localized sales of certain arms, or those that imposed waiting periods on purchases. But full-on possession bans with no grandfather clauses, Judge Lee thinks, should not stand in his Circuit.

The dissent from Judge Barbara Lynn insists, among other things, that other federal circuit courts considering similar issues upheld the laws, though Lee in his opinion mostly insists those other cases involved LCM restrictions short of total ban and confiscation.

Judge Lynn also relies on an earlier 9th Circuit case, Fyock v. Sunnyvale, upholding a District Court that did not overturn a California city's LCM ban and seemed to ratify the use of intermediate scrutiny in such cases. Judge Lee believes that in Fyock "We held only that the district court did not abuse its discretion by choosing intermediate scrutiny based on the limited record before it on a preliminary injunction appeal," a distinct issue from whether intermediate scrutiny is actually appropriate or justified.

While the specifics of some of the other LCM restriction cases Judge Lynn discusses are not the same in all respects as those in Duncan v. Becerra, her listing of them does indicate enough tumult among federal circuits to make it perhaps ripe for the Supreme Court to weigh in in the future on an appropriate case on the general question of LCM restrictions.