Cops demonstrated their commitment to free and fair elections by firing rubber bullets and water cannons at protesters. 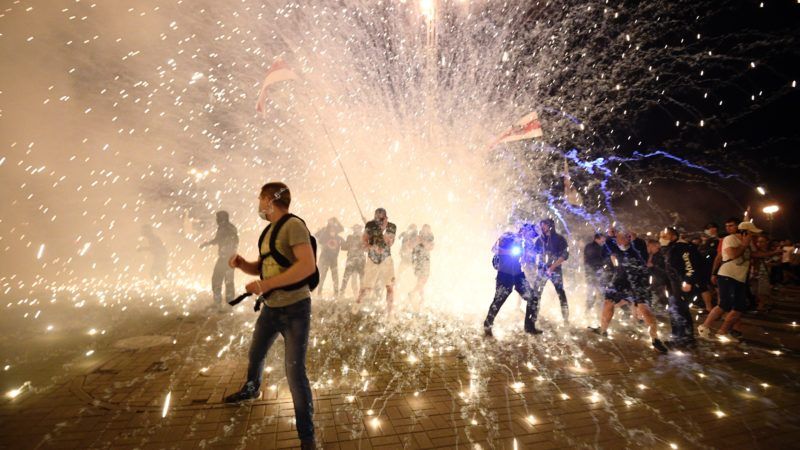 Thousands of Belarusians took to the streets this week to protest the contested "landslide" election victory of Alexander Lukashenko to a sixth term as the Eastern European nation's president.

Belarus's Central Election Commission declared that Lukashenko, often referred to as the "last dictator in Europe" for his repression of political rivals and cultivation of Soviet-style governance, received just over 80 percent of the vote, with his main challenger Sviatlana Tsikhanouskaya failing to even reach 10 percent.

Tsikhanouskaya has claimed victory for herself, alleging that leaked results from over 50 polling stations showed support for her candidacy. Photos of tallied ballots purporting to show a sizable lead for Tsikhanouskaya circulated on Twitter. Independent exit polls of Belarusians voting both abroad and at home showed a strong preference for Tsikhanouskaya.

Police and protesters are now litigating the election results on city streets.

In the capital city Minsk, and in cities across the country, pro-democracy protesters gathered in support of Tsikhanouskaya after Lukashenko was pronounced the victor on Sunday. Crowds chanted patriotic and anti-government slogans such as "Long live Belarus!" and "Fascists!" Many flew the red and white flag of the Belarusian People's Republic, the democratic government in exile.

Belarusian authorities took a brutal and indiscriminate approach to the resulting civil unrest, closing roads and subways and disabling internet and cell networks on Sunday.

Dozens of protesters were injured as police used aggressive suppression tactics such as flash-bang grenades, rubber bullets, and water cannons. At least one death has been confirmed after a bus driver tried to return a stun grenade launched by riot police.

Many people are injured after clashes with police in Minsk pic.twitter.com/bPsHcwxmyK

Undeterred, protesters in Minsk reconvened on Monday night, occupying space near the Riga mall and Pushkinskaya metro station. According to Belarus's Ministry of Interior, around 3,000 protesters were arrested on Sunday night, with another 2,000 detained on Monday.

In some smaller towns, law enforcement put down their shields and refused to attack peaceful demonstrators.

On Monday, Secretary of State Mike Pompeo stated the election was "not free and fair," criticizing the regime's internet shutdowns and violent crackdowns on protesters. Democratic presidential nominee Joe Biden also condemned the repression, calling for Lukashenko to "respect the rights of peaceful protestors and to refrain from further violence."

The fallout from the election will likely worsen the country's already unstable political situation, which worsened when the regime arrested most of the opposition's presidential candidates in June. Pro-democracy groups called for a general strike on Tuesday that shut down the country's largest industries.

As of Tuesday morning, Tsikhanouskaya had left Belarus and fled to Lithuania, claiming that she made the decision "absolutely independently" despite being detained for hours by authorities just one day prior.