In Michigan, the Wrong Way To Govern During a Pandemic

As federal guidelines suggested classifying more industries as "essential" so that they could reopen, Gov. Whitmer arbitrarily did the opposite.

Shikha Dalmia | From the August/September 2020 issue 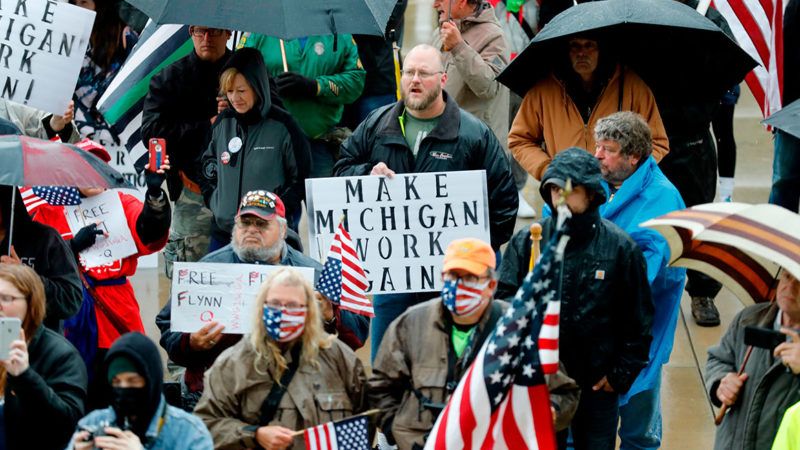 Few governors have handled the coronavirus crisis perfectly, but Democratic Michigan Gov. Gretchen Whitmer might deserve the prize for the least perfect performance. Her lockdown has inspired around 16 lawsuits and multiple protests. One doesn't have to agree entirely with the protesters to understand that Whitmer went overboard.

Most local lockdowns had their share of nuttiness. But as long as the ratio of good sense to nonsense remained relatively high, Americans mostly went along. That started changing in the Wolverine State when Whitmer defied the legislature and unilaterally extended the lockdown beyond the 41 days that both sides had agreed to, prompting a lawsuit by the body's Republican majority. What's more, instead of easing restrictions over time, Whitmer added stringent new provisions even as the original goal of the lockdown—flattening the curve—was accomplished.

As federal guidelines suggested classifying more industries as "essential" so that they could reopen, Whitmer arbitrarily did the opposite. She ordered big-box outlets to stop selling paint, carpets, and other home improvement material in-store and to block aisles containing those items. But grocery stores could still ply people with soda and candy. Selling lottery tickets was allowed, as was (mercifully) liquor. Landscaping services, however, were suspended.

The last meant that Contender's Tree and Lawn Specialist Inc., a company that had purchased hundreds of thousands of dollars of plant treatment in anticipation of the lockdown lifting, stood to lose all its plants. The company sued. So Whitmer released landscaping companies from captivity, along with golf courses.

But other categories of work, including "nonessential" medical treatments, were still prohibited. Michigan residents couldn't see a doctor except for medical emergencies. No gallbladder operations, annual physicals, or dental checkups were permitted. And no number of safeguards adopted by medical facilities could convince Whitmer to acquiesce to Republican suggestions to include them in one of the earlier phases of reopening. They had to wait till the pandemic was in "phase six"—when "sufficient community immunity" or a "high uptake of an effective therapy or vaccine" was achieved, which could take years. Whitmer was unperturbed that in the interim, an untold number of people would suffer from health problems not related to the coronavirus and medical facilities, starved of income, would shutter. This triggered yet another lawsuit, this one filed by the free market Mackinac Center for Public Policy on behalf of patients and providers.

Whitmer's lockdown didn't even spare the barely affected northern regions of Michigan, putting the modest livelihoods of those residents in jeopardy. Her theory was that any activities beyond the absolutely essential would jeopardize frontline workers by driving up infection numbers. But this mindset, which regards even an infinitesimal increase in secondary risk as unacceptable, could justify stopping virtually any activity anytime.

Whitmer decreed that violations would count as misdemeanors punishable by up to a $1,000 civil fine, among the stiffest in the country. Criminal penalties were also on the table. Meanwhile, Michigan Attorney General Dana Nessel, apparently looking to China for inspiration, encouraged employees to rat out employers who flouted the rules.

Although the initial lockdown was relatively uncontroversial, the extension triggered a backlash. A Facebook group called Michiganders Against Excessive Quarantining gained steam, reaching over 282,000 members. Its rhetoric was fairly measured at first, but by mid-May, according to Newsweek, one of its members was warning: "We haven't had any bloodshed yet, but the populous [sic] is counting to three, and yesterday was day two. Next comes watering the tree of liberty with the blood of tyrants." Calls to hang, shoot, beat, or behead the governor proliferated.

Rallies got nastier, too. In April, the Michigan Conservative Coalition's "Operation Gridlock" invited motorists to Lansing, the state capital, to jam up roads. The group impressed on protesters to be respectful and responsible. Though it drew some Confederate flag wavers, that was nothing compared to subsequent rallies, where gun-toting militants entered the Capitol. In response, armed guards escorted minority lawmakers into the building. In mid-May, the legislature shut down for a few days. The state's largest militia, Michigan Home Guard, dispatched armed members in Trump paraphernalia to prevent police interference as a 77-year-old small-town barber opened his shop in defiance of the lockdown.

President Donald Trump's personal attacks on Whitmer and characterization of these extremists as "very good people" may have drawn them out. But Whitmer's resort to the maximal possible force, rather than the minimal necessary, played into their hands.