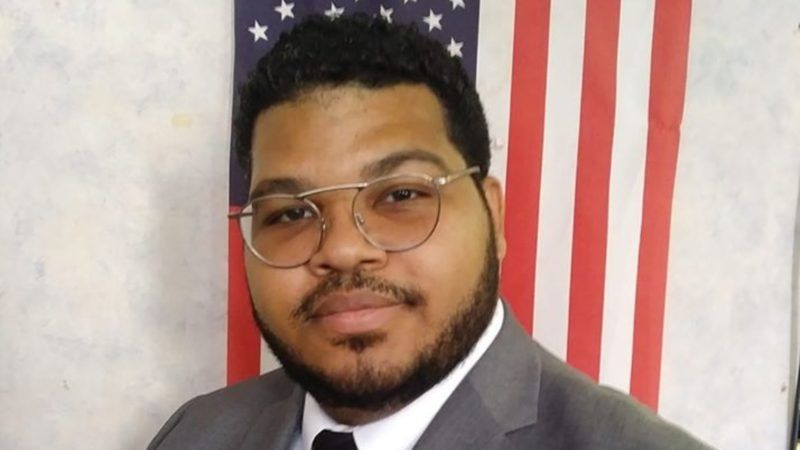 Sen. Tom Cotton's Democratic challenger, Josh Mahony, dropped out of the U.S. Senate race just hours after the filing deadline closed. Between this and Cotton's comments over the past few weeks, which range from calling slavery a "necessary evil" to calling for military force in American streets, many Arkansas voters worry that the Republican incumbent is running unopposed.

"There is an alternative to Tom Cotton," reads a Tuesday headline from the Arkansas Times, reminding voters that Cotton's race is not as uncontested as some people believe.

A Libertarian prison chaplain who hopes to be Arkansas' first black senator, Harrington is indeed a unique candidate. The 34-year-old Pine Bluff resident is a husband and a father. He's also the son of a corrections officer and a nurse, which he says is particularly fitting since his campaign's main issues are criminal justice reform and health care reform.

And he's running, in part, to keep Cotton out of the White House.

"The Libertarian Party of Arkansas is very enthusiastic about the campaign of Ricky Dale Harrington, Jr. to unseat Senator Tom Cotton," says Michael Pakko, the Libertarian Party's state chair. "It is rare to find a high-profile race like this featuring a two-way contest between a Libertarian and an incumbent. We intend to make the most of the publicity.

"Ricky is an exceptional candidate," Pakko adds. "He is an ordained minister who has experienced life as a missionary overseas, giving him a worldview that is both expansive and nuanced. His experience as a counselor in the Arkansas prison system has given him a first-hand view of the problems of our criminal justice system, providing him with the initial motivation to run for office."

Harrington was brought to libertarianism by Ron Paul's 2008 campaign for the Republican presidential nomination. Paul's non-interventionist stance on American foreign policy won him over, Harrington recalls.

"I would have voted for him if he won the nomination," says Harrington. "Going to war should be one of the last things humans do."

Harrington decided to run for Senate for two reasons. The second, he says, is that "the executive branch is becoming exceedingly bloated and expanding its power." And the first? "Tom Cotton."

In a 2016 speech, Cotton insisted that America is actually suffering from "an under-incarceration problem." The statement enraged Harrington. During an interview with Larry Sharpe, Harrington said he wanted to look Cotton in the face and challenge him on the statement.

"I think Tom Cotton is just placating people's fears and uneducated proclivities. If he had a chance to walk in a penitentiary with any ounce of compassion, he would issue a public apology for a statement like that," Harrington says.

If anyone is qualified to teach Cotton about the realities of the criminal justice system, it would be Harrington. Growing up, his father "scared him straight" with horror stories about the prison system. So when Harrington applied for a number of jobs after moving back to America from mission work in China, he was surprised that the only call back he received was for a position as a prison chaplain.

"I never thought I'd do something like this," he says. "But it's one of the best things I've ever done in my life."

He mentions the fight to posthumously test DNA evidence in the case of Ledell Lee, a death row inmate executed in 2017. The Innocence Project and the American Civil Liberties Union have filed a Freedom of Information Act suit to use DNA testing to see if Lee was innocent. If the DNA tests show that Arkansas killed an innocent man three years ago, Harrington says he will "vehemently oppose" the practice. As a chaplain for both the families of victims and the families of death row inmates, Harrington has seen how both sides are affected by capital punishment. "But," he adds, "it's hard to justify a system that executes an innocent person."

Harrington has ideas about reforming other parts of the criminal justice system at the state and federal level, beginning with sentencing.

Harrington wants to change an Arkansas law that keeps prisoners who commit certain crimes ineligible for parole until they complete 70 percent of their sentence. Many of the crimes affected by this rule are violent, but it is also applied to such crimes as the manufacture and/or trafficking of methamphetamines. Harrington would like to see the end of mandatory minimums and the War on Drugs, the latter of which he says has "done more harm than good."

Here, Harrington turns to discussing the current protests against abusive policing. Just a week after returning to America from China, Harrington says, he was pulled over by aggressive officers in Sherwood, Arkansas. And encounters like Harrington's are not uncommon.

"I'm thinking, 'I just left a Communist country to come back to my own country and die,'" he says of the encounter.

Harrington's children are autistic, so he worries each time he sees a story of poorly trained officers brutalizing or killing someone who is mentally handicapped (or their caretakers). He once worked as a takedown specialist at a psychiatric hospital, a job that primarily consisted of simply talking to patients when they seemed like they were about to become violent.

"I find myself perplexed that police officers can't do the same thing."

Harrington says he's tired of hearing stories about no-knock raids and children being harmed by flash grenades. As he puts it, "You can't sit here calling yourself pro-life while supporting babies being maimed over drugs."

Harrington's other ideas include demilitarizing the police ("If police are using the equipment our fighting forces use to crush our enemies, what does that mean the police think about the people?"), better de-escalation techniques ("Every encounter does not need to end in violence or the threat of violence"), easing the burden on public defenders ("It's hard to give someone a good fighting chance if they're overloaded"), and promoting prison rehabilitation programs that offer inmates an education and teach basic life skills ("We want people to serve their time, get out, and never come back").

Besides criminal justice reform, Harrington's other major issue is health care. "My job is to try to remove government's heavy hand in the system," Harrington says. "We need health care revolution."

In Harrington's ideal health care system, communities and patients would have more power. He wants to remove regulatory hurdles like certificate-of-need requirements, which he says "keeps competition out" and "drives up cost." He also rejects the idea that proposed top-down approaches like Medicare for All would lower the exorbitant health care costs passed on to patients.

Harrington worries that his opponent has his eyes on the White House, something that concerns him given Cotton's history of authoritarian comments. "We need to stop someone who has said the things that he's said."

It took a lot of work to get Harrington on the ballot. "In 2019 the state legislature raised the petition signature requirement by nearly 270 percent," Pakko reports. The party then "embarked on a petition campaign while simultaneously challenging the new higher threshold in federal court. With the help of an injunction that survived a state challenge in the 8th Circuit Court of Appeals, the Libertarian Party and Ricky Harrington will be on the ballot in November."

Meanwhile, the pandemic has made it hard to campaign. Still, Harrington has grabbed every opportunity he has to talk with voters.

"I always try to find common ground with people. It's just like evangelization," he says. "If Libertarians spent a lot more time sharing the portions of libertarianism that people already agree with, we'd probably bring a lot more people to our movement and we'd put a dent in the two-party system."

Reason reached out to Cotton's campaign for its thoughts on its Libertarian challenger but did not receive a response.