The Return of Sports Is Great. It's Also Deeply Weird.

Playing baseball in the uncanny valley 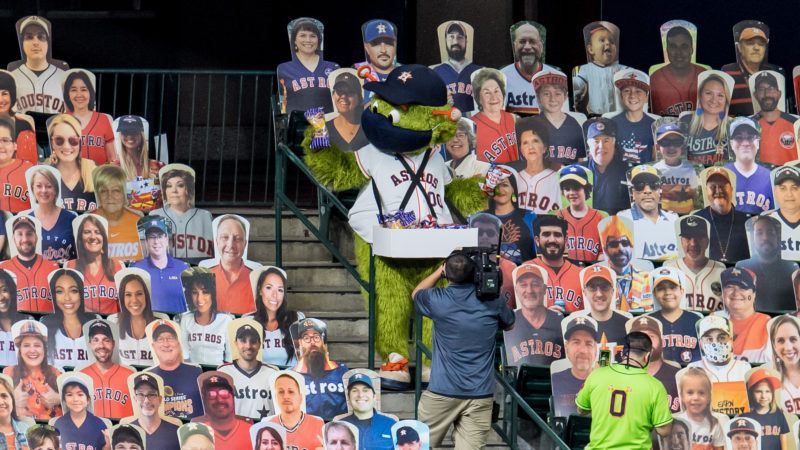 Kyle Schwarber crushes a baseball towards centerfield. The crowd oohs, and the cheers grow louder as a Milwaukee Brewers' outfielder watches the ball sail over his head. Fans in the bleachers stand to try to snag one of the season's first home runs.

At least, that's how it looked and sounded if you watched Sunday's nationally televised game on FOX—and if you weren't watching too closely. In the real world, the only cheers came from Schwarber's Chicago Cub teammates, and no one was scrambling to catch the baseball as it thunked off the empty stands beyond the outfield wall.

Like all professional sporting events right now, the game was played behind closed doors. But viewers at home still got something vaguely akin to the "normal" experience. Simulated cheers and general background crowd noise have been edited into soccer matches by Fox, ESPN, and other networks during the pandemic too. But last weekend's baseball games marked the debut of Fox's use of "simulated fans" to make stadiums appear jam-packed even when they're virtually empty.

No fans? Not on FOX Sports.

In some ways, it's a cool idea—one that the Miami Marlins probably wish they'd dreamed up years ago. Fox and Major League Baseball borrowed from video games, hired artificial reality programmers, and edited the whole thing together using a more advanced version of the computer that seamlessly draws the yellow line-to-gain on football fields during broadcasts. The Verge has a terrific deep dive into how it all works, if you're curious.

But does it work? Not really.

Those simulated crowds are an attempt to embrace the idea that the return of pro sports to TV represents a return to normalcy. But the uncanny valley that Fox and MLB have created serves mostly to reinforce just how weird, how abnormal, things are right now. That's not helped by the fact that the fake fans only show up in certain shots. (Fox programmed four of its camera angles to include them.) Even if the simulation were convincing, TV viewers would be left feeling like they were whipsawing between two different realities.

A NO-DOUBTER by Kyle Schwarber ???? pic.twitter.com/Sezm5kYOoc

It's also not helped by the stories that have surrounded baseball in the week since the Washington Nationals and New York Yankees belatedly opened the season. Within days, 20 of the Marlins' players had tested positive for COVID-19 and another outbreak popped up in the Philadelphia Phillies' organization. Both teams (and some of their would-have-been opponents) have been stuck in limbo since Monday. More than a dozen games have already been canceled. It's still unclear when or if either of the affected teams will be cleared to resume games—or whether those players will be able to hit a major-league fastball after two weeks of being quarantined in hotel rooms.

On Friday, the St. Louis Cardinals canceled their scheduled game due to multiple positive tests. There's been widespread speculation that the baseball season may have to be abandoned entirely.

Zoom out a little further and the picture gets worse. This week saw the 150,000th recorded American death due to COVID-19. We also got a better sense of the economic destruction that the disease and the response to it have wrought. It's becoming apparent that most schools are not going to open on time. President Donald Trump is skylarking about delaying the election.

Good luck convincing anyone that things are returning to normal under those circumstances.

But the return of professional sports still matters, even in these somewhat bizarre forms. The National Basketball Association returned to action on Thursday night, and the National Hockey League will join the party this weekend. Both are hoping to finish seasons that were suspended in mid-March, and both have concocted expanded playoff tournaments with the goal of crowning champions by mid-October.

Unlike baseball, those two leagues are playing all their games in one or two locations—the NBA is in Orlando and the NHL is divided between Toronto and Edmonton. Creating "bubbles" means no travel will be necessary, and the leagues hope it will reduce the potential for the pandemic to disrupt seasons again. Whether it works remains to be seen.

Sports in the uncanny valley of fake fans, simulated crowd noise, and quarantine bubbles is better than no sports at all. Certainly, it is better for the players and coaches who can get back to doing what they love to do. And for fans, the explosion of televised sports is a rush of blood to the head. Soccer, golf, and tennis have been back for a few weeks now, but the sudden return of the major North American team sports is especially exciting.

But I could do without the digital mannequins in the bleachers.