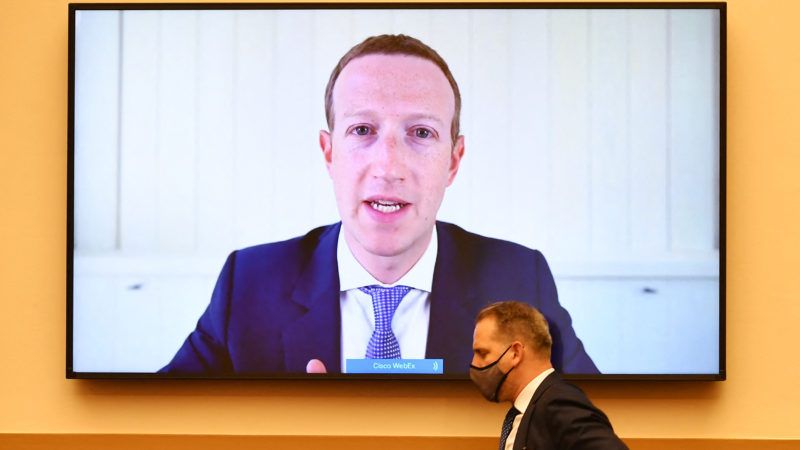 Congress proves how shallow and absurd its anti-tech agenda is. Political preening, petty grievances, and a terrifying cluelessness ruled House lawmakers' Thursday questioning of the chief executives of Amazon, Apple, Facebook, and Google.

During the hearing, Democrats and Republicans on the House Judiciary Committee took turns offering a series of stern looks and fiery (if unsupported by anything more than anecdote) allegations about the illegal, un-American, cop-hating, Communist-supporting, Russian disinformation-spreading, election-throwing, child-abuse-enabling, small-business-quashing, app-suppressing, mob-like, conspiracy-minded, all-powerful behaviors of America's most valuable companies.

Lawmakers barely let the tech CEOs—Amazon's Jeff Bezos, Apple's Tim Cook, Google's Sundar Pichai, and Facebook's Mark Zuckerberg—get a few words out between their wild accusations. And they quickly glossed over any complicated issues, clearly preferring to spend their allotted questioning time getting good video clips of themselves.

As Reason's Eric Boehm and Robby Soave explained in posts yesterday, lawmakers spent the time "using the threat of antitrust action to try to force tech firms to take sides" in political battles and couldn't even keep straight which companies they were mad at for which things.

It was almost enough to make you feel for Zuckerberg, even (almost). Certainly, poor Cook didn't belong there. And—whatever legitimate (and diverse) issues there are with some of the ways their companies do business—none of them deserved the insults and inanity they were subjected to yesterday.

The telehearing stretched on for hours, over the course of which it became abundantly clear that Democrats and Republicans are often diametrically opposed in their grievances while acting like satisfying them is only a matter of tech leaders choosing to do the Right Thing. Neither side admitted that acting as it wished would run afoul of the supposedly simple and common-sense things their opponents wanted "Big Tech" to do.

The most dramatic of these tensions involves web content moderation. It's not that far off to say Democrats want these companies to suppress more content and Republicans want them to allow more content without question.

Was just thinking this. There's no way they can win. Each member is demanding they do opposite things. Wtf https://t.co/CyoXZttfvo

Even within the same side and sometimes the same individual, there were contradictory complaints about tech companies and implications about what they should do.

For instance, when it came to marketplaces like Apple's app and podcast stores, or Amazon more broadly, some committee members acted as if it was dangerously anti-competitive for these companies to reject many podcasts, apps, goods, etc., or to give preferential treatment to their own products and services. Yet Bezos and Cook were also excoriated by lawmakers for failing to completely weed out misleading, offensive, or counterfeit items.

Rep. McBath complains that Apple can exclude apps from the app store.

My favorite restaurant eliminated my favorite dish a couple of years ago. I'll be contacting Rep. McBath's office directly for help.

Neither Republicans nor Democrats on the committee would acknowledge the huge tension between expecting tech platforms to be open marketplaces in order to foster competition, avoid discrimination, eschew bias, and satisfy (a perverted version of) antitrust law while simultaneously expecting them to actively thwart spammers, scammers, fakers, foreign influence, sex ads, bigotry, and all the other bad things.

And neither Democrats nor Republicans seemed at all keen on letting these private companies make business decisions as they see fit, with politicians from both parties describing their basic business activities (like trying to improve products, keeping up with current tech trends, etc.) as nefarious conspiracies.

gop: fuck your business
dems: fuck the concept of business at the conceptual level

If these companies were truly monopolies, then they wouldn't have to keep changing their products to keep the market happy. Yet over and over the Reps seem mad that these companies keep innovating to keep up with the market…

"Undoubtedly, the motivation for many politicians on both sides of the aisle" with anti-tech stuff "is to score political points for standing up to big corporations. Such a David and Goliath narrative plays well on the campaign trail," notes Casey Given at the Washington Examiner.

In order for them to be the good guys, they need tech leaders to be bad guys.

But keep in mind that this wasn't just some lark—the committee launched this investigation "more than a year ago," with the alleged objectives of "document[ing] competition problems in the digital economy" and evaluating "whether the current antitrust framework is able to properly address them."

If yesterday was any indication, it is not.

None of the tech-company docs they dug through or other investigative measures seem to have yielded new or damning information about Apple, Amazon, Facebook, or Google. A handful of gripes from these companies' competitors or customers was almost all Congress offered by way of "evidence." And most of yesterday's questions weren't even about antitrust concerns but election integrity, Section 230, content moderation, stopping crime, protecting civil liberties, etc.

Lawmakers yesterday repeatedly demonstrated a lack of understanding about communications law as it exists and how tech products work.

Hahahahahahah. @RepGregSteube is complaining that his campaign emails are going to spam (which he thinks only happens to Republicans). Uh, no dude. YOUR RECIPIENTS MARKED THEM AS SPAM.

Here is your reminder that EVERY major company collects data to create private-label brands. It is entirely legal.

Have these politicians been to Trader Joe's? Walmart? CVS?https://t.co/ye6B9B9a0A

Congressional hearings are where politicians insult and ridicule successful business people for not being as stupid as they are. https://t.co/2sv9gxywjk

Rep. Matt Gaetz (R–Fla.) asked if any of them opposed "American values" and demanded a pledge to continue working with police.

Rep. Kelly Armstrong (R–N.D.), bless his heart, was the only member who asked how tech companies are going to protect user data from the police. Armstrong also pointed out that privacy laws can actually help big, entrenched businesses and burden or stop smaller competitors.

Anyway, if you want some quick and potent evidence that this was all about partisan mudslinging, scapegoating, and trying to use search engines, social media, and tech marketplaces to their respective party's advantage, check out the House Judiciary Democrats and House Judiciary GOP Twitter feeds.

Stories from competitors are anecdotes not evidence. With all these documents and time, we'd expect a solid case against these businesses.

Calling someone a monopoly (especially when sitting next to direct competitors) doesn't make it so.

The bottom line, as Boehm wrote yesterday: "Wednesday's hearing of the House Judiciary Committee was more about theatrics than seriously considering the use of antitrust law. Perhaps that's because it's somewhat ridiculous to argue with a straight face that Google or Amazon are actually monopolies, or because it's quite obvious that consumers who dislike Apple's or Facebook's products are perfectly free to give their time, money, and business to competitors on or off the web."

One more thing: in all the culture war and political posturing, we often overlook the fact that media businesses—emphasis on the business part there—are pushing political investigations and government regulations out of animosity toward tech companies cutting into their ad revenue and audiences. We shouldn't:

REMINDER: The media is a special interest @RepJerryNadler ignores the fact that publisher revenues came from controlling local monopolies on information distribution with high capital costs.

With Universal Mail-In Voting (not Absentee Voting, which is good), 2020 will be the most INACCURATE & FRAUDULENT Election in history. It will be a great embarrassment to the USA. Delay the Election until people can properly, securely and safely vote???

"Domestic violence prosecutions have little benefit to women and in fact can harm them, but the prosecutors are very convinced they are saving women's lives." https://t.co/WglzybXv3n

The only way we'd ever get the kind of ubiquitous COVID testing that people are dreaming about is to legalize unfettered sales of direct-to-consumer tests that one can take without the involvement of a health professional or lab. https://t.co/77x9ybwgLx

• ProPublica is keeping tabs on whether police getting violent with current protesters are being disciplined.

• Only two counties in Tennessee have non-worrying rates of COVID-19 transmission:

BREAKING: Tennessee is down to just two counties with #COVID19 under control. 93 of 95 counties are classified by the state as having unacceptable rates of transmission. That means elderly people in long-term care facilities in those 93 counties cannot have visitors. @NC5 pic.twitter.com/AdOTxhJBA4

• A very good and concise summary of Section 230: