Let's replace the names of Confederate figures with those of patriots who upheld America's ideals. 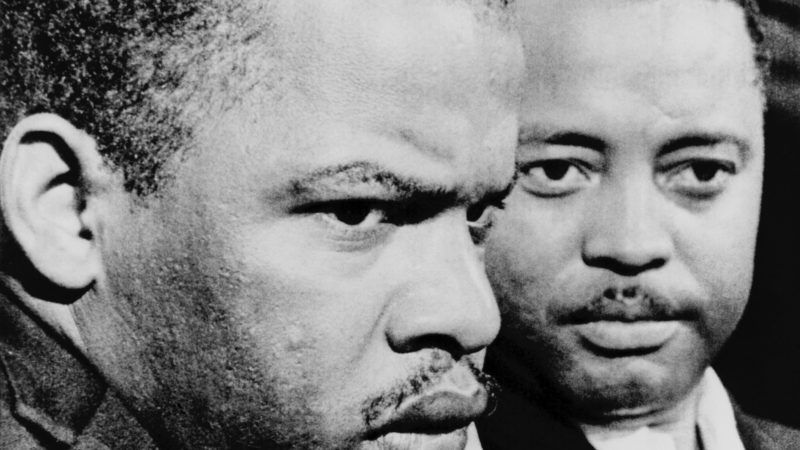 During an interview with Fox News host Chris Wallace 10 days ago, President Donald Trump mocked the idea of dumping the names of Confederate officials from military bases. America won two "beautiful World Wars that were vicious and horrible" from bases such as Fort Bragg and Fort Lee, he said. "[N]ow they want to throw these names away," he scoffed. "What are we going to name it? We're going to name it after the Rev. Al Sharpton?"

Sharpton would probably agree that there are far better candidates than him: black veterans of the two wars Trump mentioned (and several others) who were deprived of honors they were due and instead brutally attacked or lynched after they returned home.

Trump claims that purging Confederate names would be tantamount to wiping out American history. But the history of many of these black soldiers, who valiantly defended their country even as their country failed to defend them, has been wiped out. Fixing that is not only the right thing to do but might also help put out current racial fires, which are at least partly fueled by the gnawing feeling that racial progress has stopped—if not reversed—under this president.

Ten federal bases are named after Confederate officers, including some who resigned from the U.S. military to fight against the Union army in some of the bloodiest battles of the Civil War. By renaming these installations after black soldiers who did their duty, Uncle Sam would prod Southern states to de-Confederatize by example, not through lectures and arm-twisting, and thus also avoiding concerns about federalism and states' rights.

Blacks had served in previous wars before President Abraham Lincoln belatedly—and reluctantly—allowed them to sign up in the Union army and fight for emancipation. Whites, even many slavery opponents, were terrified at the prospect of armed black men, according to the Equal Justice Initiative's horrifying 2016 report, Lynching in America: Targeting Black Veterans. They were also worried that allowing blacks to serve would mean that the country would have to "treat [the black man] as a victor" who was "entitled" to "all decent and becoming respect," as an Ohio congressman put it at the time. Eventually, around 180,000 blacks signed up and 40,000 died in the American Civil War. After the war, Southern newspapers systematically stoked white fears about armed black soldiers stirring up trouble. One result was the 1866 Memphis massacre, in which dozens of blacks were raped, injured, and killed—their homes, churches, and schools destroyed.

Ten years later—in the North—the presence of one of the first black cadets at the U.S. Military Academy West Point, Johnson C. Whittaker, a former slave from South Carolina, so incensed his white peers that they brutally beat him, mutilated him, and left him bound and unconscious on the dorm floor. Instead of charging the culprits, West Point authorities accused Whittaker of orchestrating his own attack and successfully court-martialed him and expelled him. But at least he survived. In the next few decades, several black soldiers, especially those stationed in predominantly white towns, were lynched on trumped-up accusations without an investigation or trial as Jim Crow's reign of terror gripped the South.

Black soldiers who insisted on donning their uniform off-duty were particularly triggering to whites. Private James Neely, a veteran of the Spanish-American war, was shot and killed in 1898 because he dressed in uniform and ordered a soda inside a pharmacy like white folks, rather than outside as black people were supposed to do. His fellow veteran, Fred Alexander, was mutilated, castrated, and burned at the stake when he returned home to Leavenworth, Kansas, after rumors spread that he had murdered a white woman two months earlier—never mind that the local police's working theory was that she was a victim of a robbery gone wrong.

Such attitudes did not change for another century.

Thanks to appeals by the brilliant civil rights activist and co-founder of the National Association for the Advancement of Colored People W.E.B. Du Bois (a man whose name, along with that of the great black abolitionist, Frederick Douglass, should also be emblazoned on federal buildings), around 380,000 blacks signed up to serve in World War I. Du Bois urged them to temporarily suspend their grudges against their country and "close…ranks shoulder to shoulder with our fellow white citizens." But the military, too, was segregated, so these volunteers could not actually fight "shoulder to shoulder" with their "fellow white citizens." In fact, only 42,000 blacks were allowed in combat and only in separate divisions from whites.

One of these soldiers, Henry Johnson, along with another black private, successfully rebuffed a nocturnal attack by 24 German soldiers on their French base. Even though his gun jammed and he was shot multiple times, Johnson continued to fight with his bare hands and rifle butt, killing four Germans and wounding at least a dozen. The French awarded Johnson the Croix de Guerre, their highest honor for valor, and newspapers in America were filled with stories of his heroism.

But upon his return, Johnson, who hailed from North Carolina (the home of Fort Bragg), inspired more fear than gratitude. Sen. James K. Vardaman (D–Miss.) had been warning that letting black men defend the flag would "inflate his untutored soul with military airs" and that would be a "short step to the conclusion that his political rights must be respected." Black soldiers' patriotism, in other words, was a threat, not a virtue to Vardaman because it would give them the street cred to spearhead calls for equal treatment. Unsurprisingly, when Johnson spoke out against the mistreatment of blacks, he was discharged and stripped of his disability payments. He died penniless at the age of 32. He was finally awarded the Purple Heart in 1996 and the Medal of Honor in 2015.

His plight was nothing compared to what other black veterans of the Great War faced. Concerns that they were getting too defiant were among the reasons that 25 anti-black riots erupted in cities across the country, in what became known as the Red Summer of 1919. Countless black soldiers were assaulted and beaten and at least 13 were lynched, according to the Equal Justice Initiative.

Six of these lynchings occurred because black soldiers allegedly disrespected, eyed, or otherwise behaved improperly with a white woman. Whites had become convinced that black soldiers stationed abroad had developed a sexual appetite for white women after having interacted freely with them in Europe. One particularly tragic victim of such attitudes, it seems, was Clinton Briggs in Lincoln, Arkansas. His "crime" was that he didn't move far enough to let a white woman pass on the sidewalk. She angrily confronted him, attracting a mob that drove Briggs into the wilderness, chained him to a tree, and riddled him with 50 bullets.

Bud Johnson, another veteran, was waiting to board a steamboat in Florida to return to Alabama after attending his father's funeral when he was arrested because he fit the description of someone who had assaulted a white woman. As the police transported him to the station, a mob surrounded the vehicle (a common tactic at that time), captured Johnson, tortured him, crushed his skull, and gave the pieces to onlookers as souvenirs before dumping his body in the river, according to Equal Justice Initiative's report. His relatives had to battle alligators to recover some of his remains.

The hope of Du Bois and others that black service in World War I would help black advancement backfired badly as it ignited even more anti-black violence. Still, 1.2 million blacks signed up for World War II. Despite America's wartime rhetoric of democracy and human rights, the Army itself practiced segregation, as did the rest of federal government. Black military servicemen stationed in the South could not enter restaurants where their German prisoners of war were allowed. There were signs in latrines separating out sections for black soldiers and those for German POWs and white soldiers. Even in death, black veterans were segregated with communities like Taylor County, Georgia, erecting separate plaques for them in their war memorials.

Not only were black WWII veterans denied the same G.I. benefits as white veterans, but they continued to face violence, sometimes in the very buses and trains that carried them home. As with WWI veterans, their veteran status and record of service was often a burden rather than a benefit, especially if they publicly challenged the Jim Crow order.

Lynching in America documents over 10 attempted and successful lynchings of WWII veterans, including Marine Timothy Hood. He was shot and wounded by his bus driver after he removed a Jim Crow sign from a trolley in Bessmer, Alabama. Then the police chief arrived and finished him off.

Particularly poignant is the story of Hosea Williams. He was badly injured during his service in France and returned home with a Purple Heart and a cane. When he attempted to drink from a white fountain in Georgia, a white mob brutally attacked attacked him and left him for dead. He survived and, along with his fellow veteran, Medgar Evers, went on to become a prominent civil rights leader, helping to organize the Selma march. (Evers was later assassinated by a white segregationist.)

Black veterans like Williams and Evers and Johnson have more than earned the right to have military bases named after them. One needn't buy into the 1619 Project's claim that America fought the Revolutionary War to maintain slavery to think such men should be honored. One only has to believe that the opposite of Confederate values should define America. That's what America will signal by replacing the names of Confederates, who fought against this country's freedoms, with those of black veterans, who fought for them.

President Trump is right that America shouldn't wipe out its history. He is just wrong about which side needs to be remembered—and honored.