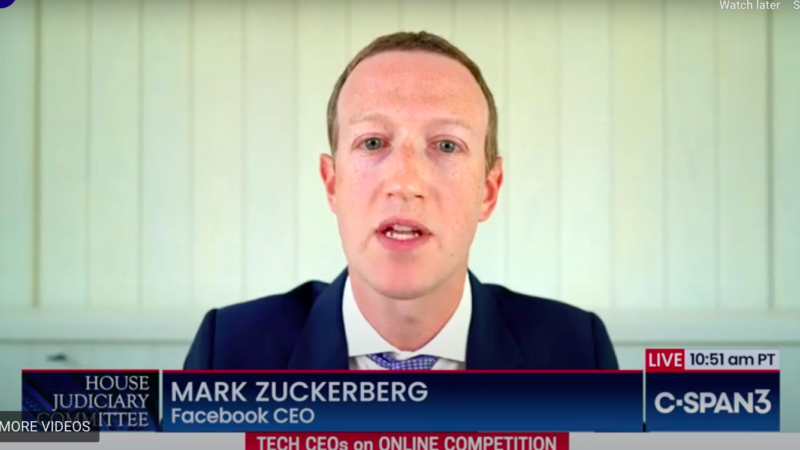 If members of Congress intend to smear the CEOs of various tech companies as censors, monopolists, and thieves, you might expect the politicians to at least keep their accusations straight. Alas, at a House Judiciary subcommittee hearing Wednesday, ranking Republican Rep. Jim Sensenbrenner (R–Wis.) assailed Facebook CEO Mark Zuckerberg over something that happened not on Facebook, but on Twitter.

While Democratic congressmen mostly used their time to dubiously accuse Apple CEO Tim Cook, Alphabet CEO Sundar Pichai, and Amazon CEO Jeff Bezos of competitive practices that hurt consumers, Republicans focused on alleged political bias against conservatives on social media sites. Rep. Jim Jordan (R–Ohio) rattled off a long list of such transgressions—several of which were genuinely troubling, though not the purview of the government.

When it was his turn to speak, Sensenbrenner brought up the very recent example of Donald Trump Jr.'s post about hydroxychloroquine getting taken down, and asked Zuckerberg to justify this move. But it was Twitter, not Facebook, that took such action against Trump Jr.

"I think you might be referring to what happened on Twitter," said Zuckerberg in response. Indeed, as Zuckerberg noted during the hearing, Facebook has "distinguished itself" by supporting free expression to a much greater degree than rival social media companies.

That's part of the reason why conservative calls to regulate social media for political bias seem so untethered from reality. There are some legitimate concerns about bias on the platforms, but Congress is not the correct authority to adjudicate them, and lawmakers who envision a role for government intervention on this front continue to embarrass themselves.