Federal Cops Are Leaving Portland. But Will the Standoff Really End?

With many of the city's entertainment options shut down, protesting has become a form of nightlife. 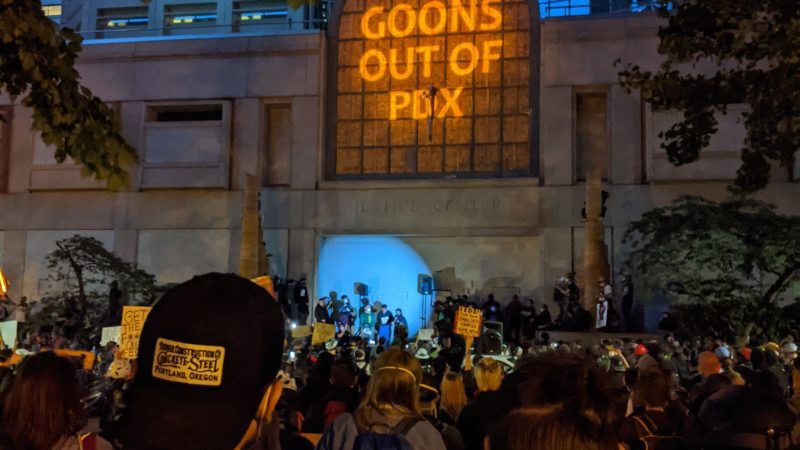 After I covered the clashes between protesters and federal law enforcement in Portland, Oregon, last week, I had a long epistolary conversation with one of the federal officers, to whom I promised complete anonymity, who had been stationed inside the federal courthouse that was at the heart of the conflict.

During a two-hour texting session, we war-gamed how the standoff between Portland protesters and federal forces might end:

With the announcement today by Oregon Governor Kate Brown (D) that federal agents will be leaving downtown Portland tomorrow, it looks like none of our predictions were correct, though barring backdoor conversations we as yet know nothing of, some combination of 3 and 8 seems to explain the move.

I was at the protests all last week, and I saw no inclination on the part of the crowds to back down. In fact, I saw just the opposite.

Sure, the majority of protesters were peaceful. But the 200 or so that had been showing up in front of the Mark O. Hatfield United States Courthouse every night since the feds showed up (in response to what was said to be local authorities' demonstrated lack of willingness to stop the violence against federal property) were growing in both numbers and tactics.

There were maybe 2,000 people outside the courthouse on Saturday night, with the usual provocations by demonstrators—flaming trash and high-powered fireworks—and responses by the feds, C.S. gas, rubber bullets, and arrests. But there was something else too: a new festiveness, marching bands, t-shirt kiosks, and, beamed onto the side of the courthouse, a high-tech light show with the names of people murdered by police, as well as piggy-faced cops with x-ed out eyes.

"The visuals projected on the side of the building had a pretty high production quality," a friend messaged me. He also indicated he was part of a private message thread where designers were figuring out how to support the Black Lives Matter (BLM) movement, which in Portland was getting pretty mixed up with what was happening at the courthouse.

The stream of support was widening, creatives and moms and vets and vendors and any other person in Portland, steeped in BLM-sympathy and/or Trump-antipathy, having a place to show support. There might be no movies in Portland, no concerts, no bars, but there was a show to go to every night, one you could help grow.

It is unknown whether the show will go on. Acting secretary of the U.S. Department of Homeland Security Chad Wolf tweeted this morning, "As I told the Governor yesterday, federal law enforcement will remain in Portland until the violent activity toward our federal facilities ends. We are not removing any law enforcement while our facilities and law enforcement remain under attack."

Someone will need to blink first, and, unless things turn truly ghastly, I have no doubt demonstrators will stay as long as the feds do. And when they go, will those who've made the building the locus of their passion and ire pull the building down brick by brick? I don't think so. They are energized to fight against a perceived enemy, and now that enemy appears to be going home.

"DHS got local support," my contact said, as to why the feds are leaving now. "If we don't have to be there because the state and local [agencies] are agreeing to do their job, we aren't needed. It's that simple."

Nancy Rommelmann is a journalist and author who lived in Portland from 2004–2019.