Judge's Ruling Means Foie Gras Is Back in California 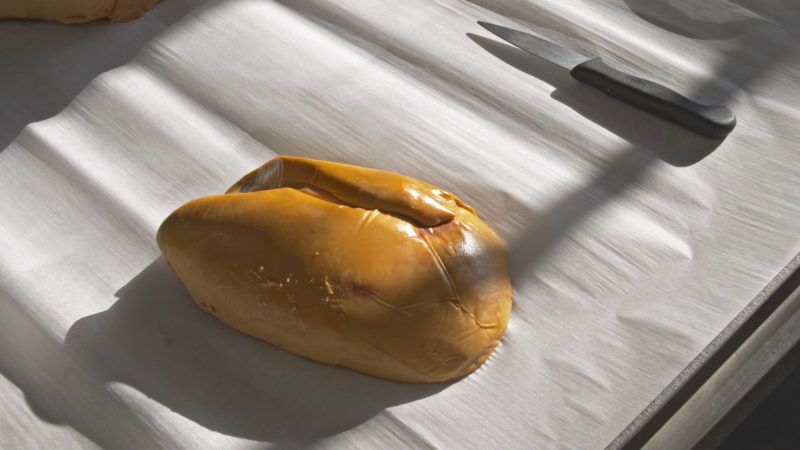 Last week a federal court in California handed a partial victory to the parties suing the state over its wrongheaded and unconstitutional ban on the sale of foie gras. Eater called the ruling "a major win" for the plaintiffs, who include a Canadian group that represents foie gras producers there and New York State's Hudson Valley Foie Gras.

Foie gras is a French delicacy made from a duck or goose liver that has been fattened using a process known as gavage. While some animal-rights activists claim gavage is cruel, many consumers, restaurateurs, and foie gras producers say the feeding process is not at all cruel.

The battle over foie gras in California has been a long and arduous one. The day after California's ban took effect in 2012, the plaintiffs sued, as I first detailed here. The case has been winding its way through the courts ever since. (I've taken an active role in fighting the ban, writing and submitting a U.S. Supreme Court amicus brief on behalf of the Reason Foundation—which publishes Reason—and the Cato Institute in 2018.)

In his order last week, Judge Stephen V. Wilson of the U.S. District Court for the Central District of California granted the plaintiffs' motion for summary judgment on the plaintiffs' narrow question of whether the state ban applies to shipments and deliveries of foie gras inside California that are made as a result of an out-of-state purchase of foie gras. In its ruling, the court also rejected a pair of competing claims by the plaintiffs and defendant—rejecting the state's motion to dismiss the case and the plaintiffs' request to rule the California law violates the dormant Commerce Clause.

This month's "confusing" ruling holds that, under California law, sales are legal when an out-of-state seller sells foie gras that is not physically in California at the time of sale and the transaction and payment are processed outside the state (e.g., online). The ruling means a person in California may, for example, buy foie gras from an online seller based outside California and have that foie gras delivered to them legally in California by a third-party delivery service such as FedEx.

Marcus Henley, vice president of Hudson Valley Foie Gras, one of the plaintiffs in the case, tells me he's thrilled with this week's ruling.

"We are gratified that the Court recognized that California's misguided ban was never intended to apply to foie gras products from out-of-state producers that are shipped to happy consumers in California," Henley says by email.

"For 50 years, Reason has proudly supported Free Minds and Free Markets," says California-based attorney Manny Klausner, a former editor of Reason and Reason Foundation co-founder and board member who joined me in submitting the aforementioned amicus brief. "Judge Wilson's ruling is a limited, yet meaningful, judgment in support of the economic liberty of California consumers and out-of-state sellers—and is truly a delicious development for anyone who takes liberty seriously."

Exactly how limited is Judge Wilson's ruling? And how might it impact restaurants in California?

While that language makes the law's stance on in-state restaurant sales sound pretty airtight, the ruling may have made some existing wiggle room a little more spacious.

For example, some restaurants in California that oppose the law have challenged it over the years by giving away foie gras to diners as part of a meal. Even one foie gras opponent suggested this week's ruling could revive that practice. Though a previous court ruling said such gifts constitute an illegal "sale" of foie gras in California, this month's ruling, which also turns on what constitutes a "sale" of foie gras, could provide an opening for California restaurants. I wouldn't be surprised if some are already consulting with their attorneys. Another possibility, which appears even more promising, involves a situation "where customers bring in their own foie gras and pay a chef to prepare it." Other ideas come to mind, too.

Regardless of whether these or other exceptions will allow California restaurants to serve foie gras legally—coupled with the fact the COVID-19 pandemic has forced top restaurants in the state to close temporarily or even permanently—fine dining is in trouble in California and across the country. Many cities and states, including California, have relaxed pointless prohibitions that harm consumers and businesses.

Could California lawmakers use that solid line of reasoning to decide their state should no longer be the only one in America that bans foie gras sales? Of course. Should they? By all means. Will they? Probably not.

For the plaintiffs, that means their decade-long fight against California's foie gras ban continues.