John Lewis Was an American Hero Who Battled State Racism

John Lewis' life was a testament to the power of free speech and peaceful agitation. 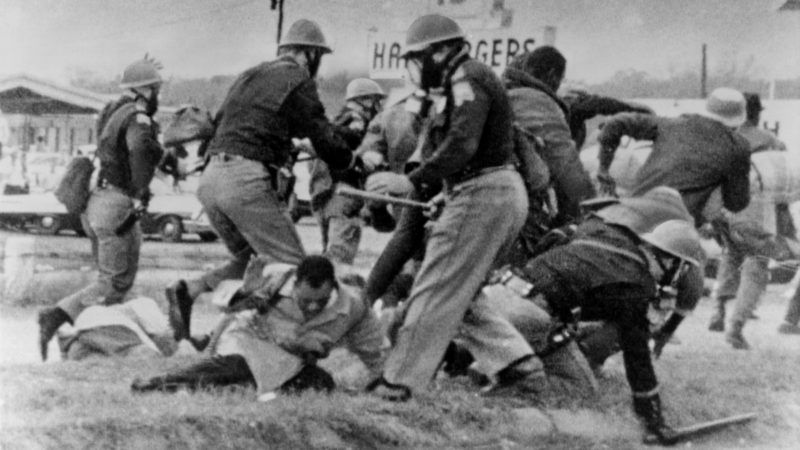 When John Lewis accepted the National Book Award in 2016 for a memoir about his time as a leader of the civil rights movement, he tearfully recalled that as a teenager in 1956 he was denied a library card. The library, he and his friends were told, was for whites only.

It's a poignant moment, but it's also a powerful reminder that, less than the span of one lifetime ago, racism in America was an institutionalized status quo enforced by governmental power to a degree that feels unthinkable today. Public libraries, public schools, public transit, and more were segregated as a matter of public policy. Challenging the fundamental injustice of those laws and institutions meant literally facing down the authority of the state.

Not being able to get a library card was only a small part of it. Lewis was jailed for more than a month in Mississippi in 1961 for the "crime" of using a public restroom marked "whites only"—one of more than 40 arrests during his lifetime. He had his skull fractured by a police officer during the violent break-up of a peaceful protest in Selma, Alabama, in 1965. That confrontation produced one of the iconic images of the civil rights era: Lewis, standing stoically with his hands stuffed in the pockets of his trenchcoat as police officers approach, batons in hand.

Lewis, who died on Friday at the age of 80, was a Democratic congressman from Georgia for the final 33 years of his life. But his greatest accomplishments came when he was a political outsider. As one of the youngest leaders of the civil rights movement, Lewis spoke powerfully against government-sanctioned injustice—and suffered for exercising his right to speak. He and his peers may not have eradicated racism from America, but they undoubtedly made the country a more free, more just place.

Indeed, Lewis' life stands as a testament to the power of free speech and peaceful agitation as tools for creating progress within a democratic system. "I got in trouble. Good trouble. Necessary trouble," Lewis remarked in 2013.

Lewis was living proof that such progress was possible without violence and without tearing down America's foundations. He went from being a kid who couldn't get a library card because of government-imposed racism to being a 17-term congressman who served alongside America's first black president. In 2015, he was honored by President Barack Obama in a ceremony that took place on the very bridge where Lewis once had his head bashed in by a police officer.

"The Civil Rights Movement…did more to advance freedom within the United States than any other movement in the past century," wrote Michael Cannon, director of health policy studies at the Cato Institute, in January, shortly after Lewis was diagnosed with pancreatic cancer. Lewis, he wrote, advanced human liberty "in his campaigns for individual rights, his advocacy for freedom in moral terms, his commitment to peaceful protest"; he helped expand everyone's freedom "to speak, protest, vote, work, exchange, travel, and marry and procreate with African‐​Americans."

His legacy is particularly important at the current moment, when debates over the role of racism—particularly when it is institutionalized within the criminal justice system—and the proper response to it are again at the forefront of American politics.

Lewis left no doubt where he stood on that. In one of his final interviews, he told The Washington Post's Jonathan Capehart that he was "inspired" by the peaceful protests against police brutality that have erupted this year—and that he viewed the militaristic response encouraged by President Donald Trump and some other officials as "a disgrace" that was "not in keeping with the best of America."

This year has made it more clear, in ways both obvious and subtle, that Americans still have work to do to force their governments to live up to the promise of legal equality. But the widespread, institutionalized, overt segregation that Lewis experienced as a young man seems foreign and dystopian to most people living in America today. As it should.

For that, we should never forget Lewis and his peers, who spoke, worked, and bled to make America a more free and just nation.