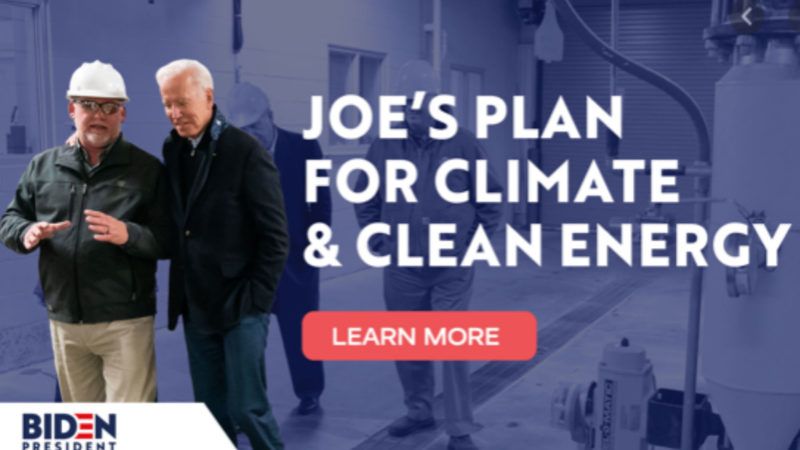 Although he doesn't call it that, Joe Biden, the presumptive 2020 presidential nominee of the Democratic Party, rolled out his version of the Green New Deal during a Tuesday speech on how his administration would handle man-made climate change. Biden's "plan for a clean energy revolution and environmental justice" incorporates most of the environmental and economic policies outlined in previous Green New Deal proposals.

Take the Green New Deal resolution introduced last year by Rep. Alexandra Ocasio-Cortez (D-N.Y.) and Sen. Edward Markey (D-Mass.). While somewhat vaguely aspirational, this aims to commit the U.S. to net-zero greenhouse gas emissions by 2050, to creating millions of unionized jobs, to investing much more in clean infrastructure and industry, to hugely expanding public transit and high-speed rail, and to greatly increasing federal support for research and development in no-carbon energy generation. In June 2019, Rep. Ocasio-Cortez estimated that the Green New Deal would cost $10 trillion.

The left-wing think thank Data for Progress outlined a more concrete Green New Deal vision in 2018. It aims to get the U.S. to 100 percent renewable electricity by 2035, shuttering all natural gas and coal-fired generation plants in the process. All fossil fuel emissions would be ended by 2050; all new passenger automobiles for sale by 2030 would be zero-emissions vehicles; and all vehicles, railways, and aviation would be totally fossil-fuel-free by 2050.

In June 2020, the congressional Democrats released the Solving the Climate Crisis report, which outlines their "action plan for a clean energy economy." This plan has a goal of net-zero greenhouse gas emissions across the United States by 2050. To that end, it calls for mandating net-zero emissions from the electric power generation sector by 2040. It wants all cars sold after 2035 to be zero-emissions, and it wants a national network of electric car charging stations. The plan would also double federal spending on public transit. All existing buildings would be retrofitted to reduce emissions, and all new residential and commercial buildings would have to be net-zero-emission by 2030. The plan also urges Congress to secure workers' right to organize a union and negotiate for higher wages, safer working conditions, and better benefits. And it calls for Congress to reestablish the Civilian Conservation Corps and to create a Climate Resilience Service Corps that would engage in such efforts as reforestation and remediating abandoned mines and oil wells.

In his climate speech this week, Biden declared that "we have nine years before the damage is irreversible." This dire forecast seems to be an update of Rep. Ocasio-Cortez' claim that "we've got 12 years to turn it around." Both politicians are misrepresenting the findings of a 2018 Intergovernmental Panel on Climate Change report, which concluded that humanity should cut global carbon dioxide emissions by 40 to 50 percent by 2030 to have a good chance of limiting future average warming to below 1.5 degrees Celsius by 2100.

Climate damages do become worse as average temperature rises, but there is no cliff of catastrophe that humanity runs off if the global average temperature increase exceeds 1.5 degrees. "Climate change is a problem of degrees, not thresholds," tweeted the Breakthrough Institute climate researcher Zeke Hausfather. "The world doesn't end if we don't limit temperatures to some arbitrary threshold like 1.5C, but at the same time the longer we delay mitigation the worse the problem gets."

Biden's clean energy plan is basically a rehash of the earlier Green New Deal proposals. For example, Biden's plan promises that all American electricity generation would be carbon-free by 2035 and the entire economy would achieve net-zero greenhouse gas emissions no later than 2050. While Biden does not set a firm date for phasing out the sale of fossil-fueled vehicles, he vows to replace the three million vehicles in the federal fleet with zero-emissions automobiles and trucks, build 500,000 electric charging stations around the country, and offer cars-for-clunkers-type incentives for people to trade in their gas- and diesel-powered cars for electric automobiles.

Biden also plans to incentivize and subsidize the retrofit of energy efficiency features in 4 million buildings and weatherize 2 million homes over 4 years. This will supposedly create a million jobs. All new commercial buildings would have to meet a net-zero-emissions standard by 2030. Biden would also subsidize the construction of 1.5 million energy-efficient homes and public housing units, and he wants to give every American city with 100,000 or more residents high-quality, zero-emissions public transportation options by 2030. He would also "spark the second great railroad revolution" by making sure that America has "the cleanest, safest, and fastest rail system in the world." Biden promises to mobilize conservation and resilience workers through a Civilian Climate Corps that would, among other things, help to plug abandoned oil and gas wells and to restore and reclaim abandoned coal and hard rock mines.

A constant refrain in Biden's plan is that all the jobs it will create will be "good union jobs." The Protecting the Right to Organize (PRO) Act is integral to his climate plan. The PRO Act, Biden asserts, will make it easier for workers to organize a union and collectively bargain with their employers by implementing card check, union, and bargaining rights for public service workers. It would also classify gig economy workers as company employees, and it would ban all right-to-work laws in the 27 states that currently have them.

Biden says that his plan would cost $2 trillion over the next four years. This is a substantial increase over his original climate and clean energy plan, which was estimated to cost $1.7 trillion over 10 years. If that rate of expenditure is sustained through 2030, Biden's Green New Deal would cost $5 trillion, instead of Rep. Ocasio-Cortez' estimate of $10 trillion. Why the faster timeline and the jump in costs? Because, Biden declared, "We're going to lock in progress that no future president can roll back or under cut to take us backward again."

Scanning through the plans proposed by Rep. Ocasio-Cortez, the Solving the Climate Crisis report, and now Biden, it's uncanny how fixing the problems associated with man-made climate change just happen to coincide with the exact same economic policies long advocated by political progressives.

Unabated man-made climate change will likely to become a significant problem for humanity as the century advances. But instead of the Green New Deal's top-down, centralized, command-and-control approach, the best policies to deal with climate change are those that encourage rapid economic growth, thus endowing future generations with the wealth and superior technologies that would enable them to handle whatever comes at them.