Scott Eastwood and Orlando Bloom in a top-drawer war story. 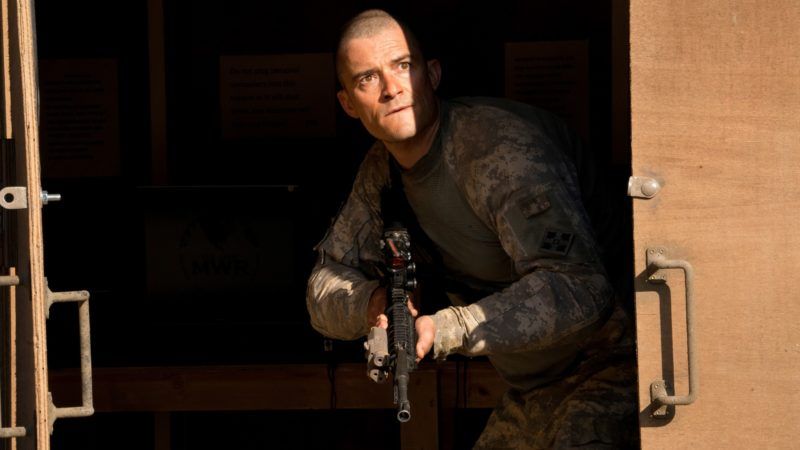 The Outpost is a ripping combat film that demonstrates one more time how soldiers confronting death in some godforsaken outback can be fatally hobbled by the micro-management of top brass who are in turn taking orders from bumbling politicians half a world away. Why do some things never change?

Based on a true-life book by CNN journalist Jake Tapper, the movie is set at a remote U.S. Army outpost in the mountains of eastern Afghanistan in 2009, the eighth year of the Afghan war. The base has no particular strategic value and is in fact situated in a valley ringed by three mountains (a violation of a fundamental law of combat: "Aren't we supposed to be on top of the mountain to win this thing?" one soldier asks). The mountains are crawling with Taliban fighters, whose sudden bursts of gunfire crackle through the hours of every day. It's a rocky and inhospitable land, populated by villagers that American officers are naively eager to aid, but whom none of the grunts trust. When a group of new soldiers arrives by helicopter, the commanding officer (Orlando Bloom in a nicely modulated performance) greets them with, "welcome to the dark side of the moon, gentlemen." (Welcome to Bulgaria, actually, where the movie was in fact shot.)

The director, Rod Lurie, is a West Point graduate who served four years as a U.S. Army officer. He conveys the profane male camaraderie of outpost life and the headlong chaos of combat with a close-up familiarity uncommon in these sorts of films. He is aided immeasurably by cinematographer Lorenzo Senatore, whose long tracking shots through dark rooms and then right out again into blazing sunlight to twirl with the actors through gunfire and explosions, is a rare achievement in war-movie camerawork.

The cast includes a number of showbiz offspring: Scott Eastwood, Milo Gibson, James Jagger, Will Attenborough. They're all fine, but it's Eastwood who gravitates quickly to the center of the movie. As we know by now, while he may lack only a dead cigarillo stuck in his mug to fully recall the scowling sang-froid of his father Clint, he has his own reserves of charisma. As commanding officers come and go at the outpost, Eastwood's character—Staff Sergeant Clint Romesha—convincingly evolves into a leader himself. In one portentous scene, in which Romesha has led some of his men out on a daytime patrol into the mountains and stands with them looking down at the outpost as the Taliban might do, he says, "Every time they take a potshot at us, they're figuring us out." Then he points out the damage that enemy fighters could easily inflict in an attack, taking out the Americans' armored vehicles, ammo depot, the base generators—and finally the Americans themselves, who'd be left exposed and helpless.

The Taliban actually are planning a major assault, an inevitability that further agitates the already jumpy Staff Sergeant Ty Carter (Caleb Landry Jones in yet another fascinating performance). The good news for Carter and the outpost's other 53 soldiers is that there's a squad of combat helicopters that's ready to fly to the rescue when the Taliban—some 400 of them—launch their assault. The bad news is that those choppers are two hours away. Can the Americans hold out? That, of course, is what makes this a story worth retelling—somehow they do; and in the end they prevail.

Lurie devotes the second half of the movie to giving this ferocious battle its due, with breathtaking stretches of wonderfully well-choreographed action – some of it unflinchingly bloody—and an accumulation of telling detail: a body bag being zipped up over a dead man's face; the nonstop sound inside an armored Humvee of bullets slapping the vehicle's outer skin; and the drained faces of men watching their comrades going down, or already dead on the ground.

The movie is an instant classic, and it's a shame it can't be shown on a big theatrical screen at the moment. But it can still reach out and excite you from a smaller one. And also make you wonder why, after 19 years, we are still in Afghanistan.