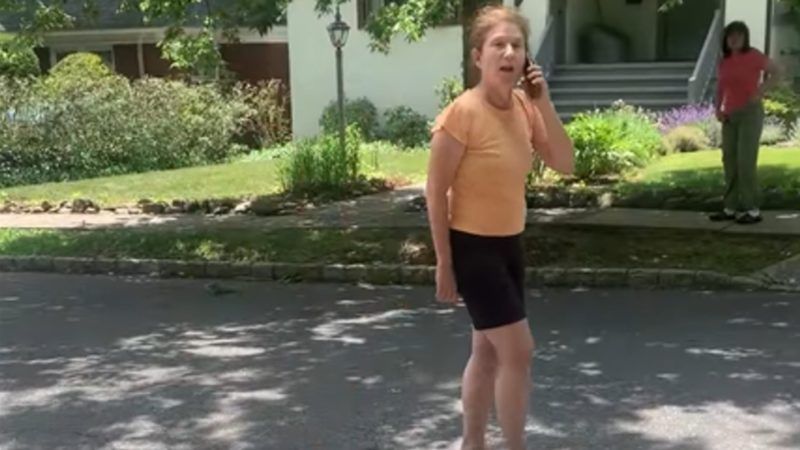 Zoning and other municipal regulations give busybodies a license to harass people they don't like and force others to conform to subjective standards as they see fit. Take Susan Schulz of Montclair, New Jersey—or as she's known online right now, "Permit Karen."

A viral video shows Schulz arguing with a neighbor, Fareed Nassor Hayat, over a permit. In the video's Facebook caption, Hayat says Schulz, who works for the Environmental Protection Agency, demanded to know whether he had a permit to install a stone patio in his backyard. Hayat says Schulz "came onto our property three times within thirty minutes" to confront him about it.

Hayat explains to Schulz that the city does not require a permit for a construction project of this size. At that point, he says, Schulz called the police and falsely claimed that he assaulted her.

It has happened again. White entitlement and black hate embodied in Susan who lives on Marion Road and works at the EPA,…

Police reportedly arrived on the scene, but neither party filled out a formal complaint. The next day, protesters marched on the street, shouting "Black Lives Matter."

Even if Hayat had needed a permit, that would just be a sign of how such laws can empower busybodies. As Reason's Damon Root has written, "zoning and proto-zoning ordinances have been used to legally separate, harass, or exclude various unpopular groups, including African Americans, recent immigrants, Muslims, gays, and assorted religious minorities." Examples range from an 1870 California law about air space in housing, which was enforced almost exclusively in San Francisco's crowded Chinatown, to a more recent mobile home ban in New Jersey, which the state Supreme Court concluded was first and foremost a tool to discriminate against black and poor Americans.

That's not the only way these overbearing rules hurt the disadvantaged. When the state of Missouri restricted revenue from traffic tickets, the tiny town of Pagedale turned to code violations and similar municipal infractions instead. Residents were excessively ticketed and fined for trivial matters such as having mismatched blinds or cracks in a driveway. Enforcement was so heavy-handed that 39 percent of the town received citations. Such fines and fees criminalize income status.

With the aid of the Institute for Justice, Pagedale residents filed a class action lawsuit in 2015 to fight the city's attempt to police for profit. Three years later, a federal judge approved a consent decree to weaken the city's power.

To better protect citizens, local governments should take such weapons away from all the Permit Karens out there. As Reason's Mike Riggs wrote in 2018, we need to "scale back the police powers of every arm of the state. Not just the police police, but the health police and the tax police and the zoning police."