Michael Sandlin | From the July 2020 issue 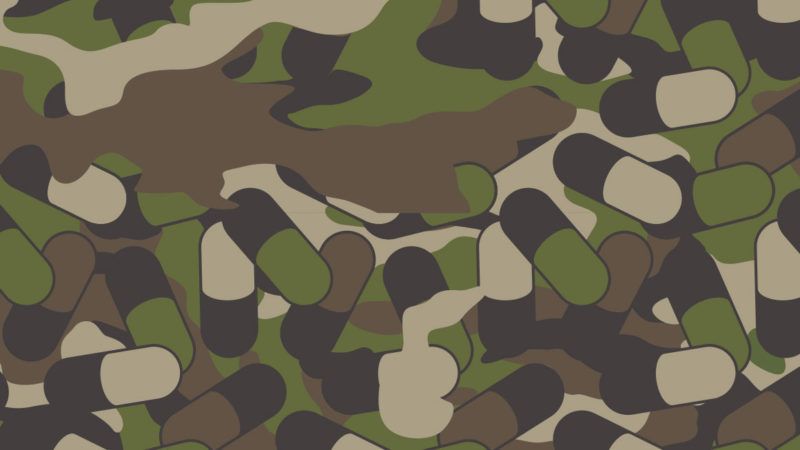 The military use of performance-enhancing drugs hasn't evolved much since Vikings rushed into battle high on hallucinogenic mushrooms. Throughout history, armies have fought under the influence of one psychoactive chemical or another, sometimes with their commanders' sanction and sometimes not: from the plant-based pharmacological highs of Zulu warriors to the vodka-numbed Cossacks in Crimea and from the coked-up British Tommies of World War I to the speeding American G.I.s of World War II. U.S. troops deployed in Iraq and Afghanistan have been routinely administered psychostimulants, steroids, and antidepressants to enhance combat performance. As long as there are wars to fight, governments will forever be trying to turn regular grunts into a more sophisticated version of that old Scandinavian berserker.

Indeed, after reading Killer High: A History of War in Six Drugs, you might start to suspect that a warring nation's troops are only as good as the performance-enhancing substances they ingest. Was it just a coincidence that the U.S. Civil War was won by the Union, which had limitless coffee stores, while the South had to fight uncaffeinated? Does it surprise anyone that the two world wars, frequently fought under the influence of uppers, lasted a combined total of 10 years, while Vietnam—a conflict marked by less energizing chemicals, such as cannabis, alcohol, and heroin—took a laggardly 12 years? And if you want grand tales of "liquid courage," look no further than the Russian army, shitfaced on cheap vodka since at least the early 18th century.

In Killer High, the Brown University political scientist Peter Andreas makes a persuasive case that you can't separate the history of war from the history of drugs. The sextet of famously addictive stimulants and depressants at the center of Killer High—caffeine, tobacco, opium, alcohol, cocaine, and amphetamines—have, Andreas writes, "fueled imperial expansion, provoked revolution and rebellion, built up states, and helped to create not only addicted armies but also nations of addicts."

Killer High is neither the first nor the most comprehensive study of the synergistic relationship between drugs and warfare, but it carves a niche for itself by including the less studied (but no less consequential) wartime role of caffeine and tobacco. Lukasz Kamienski's anecdotally driven Shooting Up: A History of Drugs in Warfare (2012) covered more historical ground in detailing the effects that cocaine, opiates, and amphetamines had on soldiers through centuries of conflict. Although Andreas' book is similarly concerned with the physical effects of mind-altering drugs on the combatants themselves, he adds a much wider geopolitical angle. In addition to what he calls the "war while on drugs," Andreas covers the "war through drugs," the "war for drugs," and the "war against drugs." His book traces the centuries-old hypocrisy of global powers that sometimes took an anti-drug stance domestically while plying their fighting forces with psychoactive substances.

Killer High also examines how drugs have been used for propagandistic purposes over the centuries. Drugs have been associated with the "evils" of both capitalism and communism, and they have been painted as the scourge of both Western and Eastern ways of life.

Andreas gets decent narrative mileage out of less controversial drugs—tobacco, caffeine, and alcohol—by exploring their history in the making (and unmaking) of states. The three major revolutions of the last 300 years reached flashpoints through public backlashes against bans or excessive taxes on rum (the American Revolution), tobacco (the French Revolution), and vodka (the Russian Revolution). During the years leading up to the American Revolution, taverns themselves were associated with sedition. Even coffeehouses had their day as venues of ill repute. In 1675, Britain's King Charles II ill-advisedly attempted to ban all coffee-dispensing establishments, prompting a huge public outcry. In 1777, Frederick the Great issued a decree against the drink, claiming the act of imbibing java was unpatriotic, yet his royal wishes fell on deaf ears among the Prussian public. Furthermore, tax revenue collected from the sale of tobacco, alcohol, coffee, and tea helped fund many an imperialist war up to the 20th century.

Still, it's Killer High's intricately constructed histories of the harder stuff—speed, cocaine, and heroin—that make for the most page-turning drama. Andreas delivers these micro-narratives with a skill and panache not usually associated with academic historians. Each chapter serves as both a story about state-sanctioned military drug abuse and a compendium of failed interdiction policies. Drug criminalization is a testament to the power of moral panics, and such panics often occur in the wake of a war whose combatants have brought their habits back home.

America's first modern drug panic followed reports from killjoy missionaries in China during the 19th century Opium Wars. The subsequent crackdown gave black marketeers an incentive to bastardize opium into more concentrated and transportable—thus more potent and addictive—forms, such as morphine and heroin. Heroin prompted another panic when the press grossly exaggerated the number of G.I. junkies returning from Vietnam. Since the 1980s, despite the best efforts of countries around the world to curtail heroin flows and discourage addiction, the worldwide opium trade has only grown; in Afghanistan alone, opium production has recently been worth in the neighborhood of $200 million per year. Andreas describes present-day southern Afghanistan as a narco-state whose corrupt officials—often with ties to U.S. intelligence and military bigwigs—compete with the Taliban for the country's windfall opium profits.

British and German troops routinely hoovered coke on the Western Front during World War I. This eventually prompted an anti-cocaine panic in the U.K., mainly due to the drug's association with London prostitutes ("cocaine girls") whom drug dealers used to supply army personnel with cocaine. Britain had completely banned the drug by 1920, but it was the post–World War II United States that became the world's most zealous anti-cocaine crusader, using its newfound international influence to push for worldwide prohibition of the drug. By the 1980s, Andreas notes, Washington's war against coke had seen "the adoption of military technologies, training, funding, and methods by domestic law enforcement." Yet despite these heavier and more violent suppression campaigns, traffickers always find ways to carry on their illicit trade.

Killer High stops short of advocating legalization. But the book does provide centuries of hard historical evidence that strict drug laws fail to rid society of drug-related violence and never curtail consumer demand for psychoactive substances; in fact, criminalization can often "create the very security threat it then provides protection against." Yet governments rarely learn such lessons. "In the end," Andreas writes, "war may be the hardest of all habits to kick."

Michael Sandlin is a Houston-based writer and editor. His film and book reviews have appeared in the Los Angeles Review of Books, the Texas Observer, the Village Voice, Cineaste, Bookforum, and many other publications.