A new documentary chronicles the defeat of a grassroots protest to halt the Texas Rangers' subsidized stadium deal. 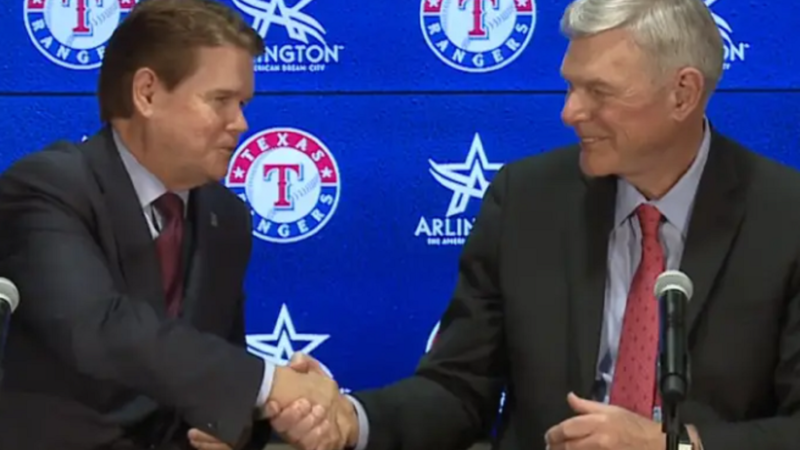 Throw a Billion Dollars from the Helicopter is a new documentary about the wildly successful (and incredibly stupid) 2016 ballot initiative led by Jeff Williams, the mayor of Arlington, Texas, to throw $500 million in subsidies at a new ballpark for the Texas Rangers. If you care at all about sports, you'll want to stream this movie, at the risk of killing whatever residual pleasure you might still get from watching baseball. And if you care about tax policy, crony capitalism, and good governance, you'll want to watch it too, even though—spoiler alert—the ragtag bunch of ex–Tea Party renegades opposed to an indefensible giveaway got bowled over like Ray Fosse trying to protect the plate against Pete Rose at the 1970 All-Star Game.

Director Michael Bertin advances two intertwined storylines. The first is tight study of local politics, showing how Arlington Mayor Jeff Williams came into office in 2015 as a small-government, tax-cutting, low-spending character straight out of central casting. Once in office, Williams almost immediately starting pimping for taxpayers to cover half the cost of a new billion-dollar stadium for the Rangers (a team once partly owned by former President George W. Bush).

Williams expertly works the levers of local boosterism, and Bertin relishes showing the mayor and other stadium supporters invoking the phrase "world-class city" over and over again. The new ballpark will feature a retractable roof! It will be not just a stadium but a family "destination" with bars, restaurants, and concert venues! All of which will be "world class" and make Arlington a "world-class city"! Smaller cities—Arlington has about 400,000 residents and is part of the Dallas-Forth Worth metro area—often have inferiority complexes, and sports leagues and national chains know how to take advantage of that when looking for sweetheart subsidy deals.

"Someone in Cleveland once said that, without the sports teams, Cleveland is just Omaha," Bertin told me yesterday in an interview. In 2009, Arlington lured the Dallas Cowboys from Irving, largely by giving billionaire team owner Jerry Jones $325 million in subsidies.

Opposing the stadium is group called Citizens for a Better Arlington, a handful of folks left over from the Tea Party movement. They come across as an amiable group of people who don't want the city to issue $500 million in bonds to cover half the cost of the park, especially since the old one was opened relatively recently (in 1994) and remains popular with fans. The bonds would be paid off by continuing a half-cent sales tax put in place to cover the debt incurred on the Cowboys' deal, plus a series of hospitality taxes on rental cars, hotel rooms, stadium parking, and tickets. It's a classic David-and-Goliath story, with the stadium backers funneling hundreds of thousands of dollars into the campaign while opponents scrape together loose change to cover the cost of yard signs and Xeroxed factsheets.

The second storyline deals with the phoney-baloney economic analysis that gets mustered up every time a team owner and pliant politicians want to sell a stadium to wary taxpayers. The Stanford economist Roger Noll compares stadiums to pyramids in ancient Egypt, structures built to honor dead pharaohs but paid for by the sweat and toil of living, breathing people. Noll and others point out that entertainment spending is generally a fixed pie and that local residents substitute one option for another. Teams thus don't create new spending; they take it from other businesses, most of whom are actually paying property and other taxes. Bertin drives home the fact that most stadium boosters talk about the "economic impact" of having a team, not the actual economic benefits. Invariably, when you factor in the costs of building and financing a stadium and all the extra giveaways to team owners (who keep most or all revenue from parking, concessions, and the like), stadium projects are municipal money pits.

As Bertin shows, Irving's economy has boomed relative to Arlington's since the Cowboys vamoosed. It might be true that Cleveland without sports teams is just Omaha, but Omaha has a median household income of nearly $54,000 while Cleveland's is just over $27,000.

The movie's title comes from the University of Chicago economist Allen Sanderson, a longtime critic of subsidized stadiums (and a one-time Reason contributor). Rather than spending massive amounts on a stadium deal to keep a team in town, Sanderson says you'd get a bigger payoff by taking the money, converting it $20 bills, renting an aircraft, and then throwing "a billion dollars from the helicopter" while hovering over a city.

The good news is that publicly financed stadiums and arenas seem to be on the decline. As one economist mentions toward the end of the movie, "Arlington is the old world" when it comes to things. Here's hoping.

A first-time filmmaker, director Bertin tells me that he started the project because he loved baseball. Before the coronavirus shut down sports (including the planned opening of Arlington's new billion-dollar stadium), he used to get MLB's streaming package that allowed him to watch just about any game he wanted to on his computer. Working on the documentary has kind of ruined it all for him, because it's just so awful to watch teams bilk taxpayers for so much money. Speaking as a fan of baseball, football, soccer, college basketball, and the Olympics (the biggest boondoggle of them all!), understanding the economics of most modern sports had me turning away long before COVID-19 cancelled everything.

Oh, well. At least we've got documentaries like Throw a Billion Dollars from the Helicopter to pass the sports-free days.

Bonus video: "5 Cities That Got F*cked by Hosting the Olympics."