Reviews: Babyteeth and You Should Have Left

Eliza Scanlen in a sharp Australian romance and Kevin Bacon and Amanda Seyfried in a familiar haunted house. 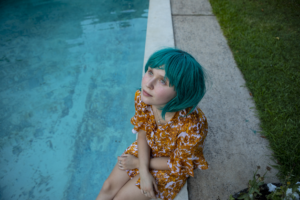 Babyteeth is a cancer-kid movie that rises high above its weepy tradition. A 16-year-old girl named Milla (Eliza Scanlen, so good in last year's Little Women) is worn down by the chemotherapy required to battle her disease. She thinks there ought to be more to her rapidly contracting life than what she has with her doting but distracted parents. (Her psychiatrist father, played by Ben Mendelsohn, is an occasional philanderer who keeps his wife—Essie Davis, radiating woozy cheer—in a happy but hazy state on a steady diet of antidepressants.) When Milla encounters a scuzzy street punk named Moses (Toby Wallace), she sees something good in him that no one else does—least of all her parents, who are immediately put off by his many tattoos and self-administered mullet. (Also by what they see as his inappropriate age—Moses is 23.)

The movie is a first feature by Australian TV veteran Shannon Murphy. She shot it in the leafy environs of Sydney and has given it a sweet, breezy charm. She also devises some wonderful shots—positioning Milla in a narrow slice of sunlight for a melancholy reverie and having her try to apply some newly acquired lipstick while licking a popsicle. The script, by Rita Kalnejais, is light on cliché and filled with character detail. Henry isn't a predatory womanizer, he's just weak; and Anna isn't just a blissed-out pillhead—she gave up a career as a concert pianist and now sends Milla to her onetime accompanist and lover Gidon (Eugene Gilfedder) for violin lessons. There's also a pregnant young woman named Toby (Emily Barclay), who brings winning high spirits to the story, if not a lot more.

Scanlen and Wallace, with their offbeat but undeniable romantic chemistry, give the movie enormous heart. We follow them, rooting all the way, as they spend a long night together passing through places that Milla will never visit again: a pub hung with sparkling fairy lights, a dance club where Milla, whose head has been shaved in the service of chemo, gazes in fascination at a slinky black woman in a silver body suit who has shaved her own head in the service of style (a magical moment).

Even at its most moving, the picture is never gooey, thanks largely to its sharp dialogue. When Milla has what could be her first taste of alcohol in a bar and then throws up outside, Moses is alarmed. "Are you allowed to drink on your medicine?" he asks. "It's never come up," she says.

You Should Have Left"

You Should Have Left is a haunted-house exercise set amid the picturesque hills and crags of rural Wales. It is here that Theo Conroy (Kevin Bacon), a wealthy L.A. banker with a deeply buried dark secret, has come with his actress wife, Susanna (Amanda Seyfried), and their six-year-old daughter, Ella (Avery Tiiu Essex), for a vacation before Susanna starts shooting a new movie in London. The family has rented a house off the Internet, a fiercely moderne structure with endless corridors and something unpleasant in the basement. Theo, a nervous wreck for reasons not immediately apparent, fires up his meditation app and sets to work scribbling insights into a therapy journal. Sometimes when he opens this book it looks like someone else has been scribbling in it, too—things like "Leave" and "You should go now." The house, in other words, has a mind of its own.

Theo pays a visit to the creepy local village, where he tells a weird shopkeeper that he's the new resident in the rental home on the hill. "Anything happen yet?" the man asks. (Was that the ghost of a smirk on his face?). Back at the house, dark things go bump in the night and Theo grumps a lot at Susanna, who spends much time texting on her phone. Texting whom? he wonders.

Given the movie's source—a twisty 2017 horror novella by German author Daniel Kehlmann—it could have been more than just a riff on The Shining. In Kehlmann's book, the Theo character is a screenwriter, which allows Kehlmann to interweave passages of the new script he's struggling to write with the freaky narrative he's currently inhabiting. It's a clever idea, and it makes something fresh out of a tired genre concept.

The movie can't quite manage that, and it leaves you wondering why writer-director David Koepp, whose name has graced many a Hollywood hit (Jurassic Park, Mission: Impossible, the 2002 Spider-Man), felt the need to pad Kehlmann's story with trite inventions while discarding some of its more imaginative elements. The result is a picture that, like its panicky protagonist, spends a lot of time racing around (those corridors really are endless) without ever ending up anyplace especially interesting.