Another Fatal Police Shooting in Louisville Gets Chief Canned

The officers who shot David McAtee had their body cameras turned off. 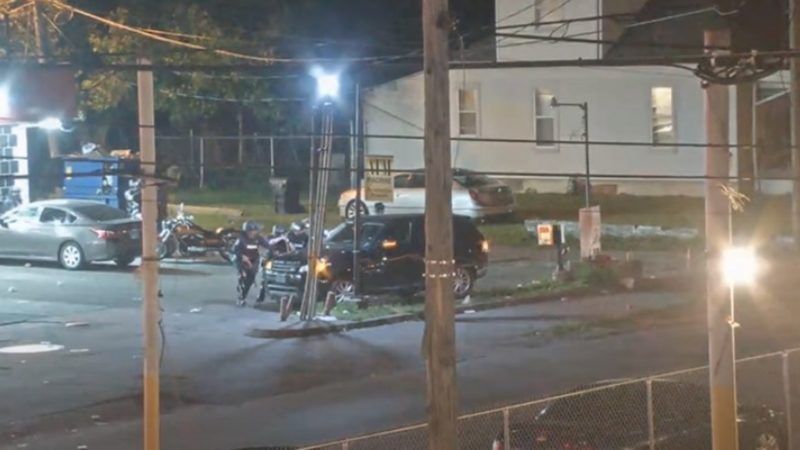 Surveillance footage of the intersection of 26th and Broadway in Louisville, Kentucky, on the night of David McAtee's shooting. (Louisville Metro Police Department)

Louisville, Kentucky's police chief is out after Louisville police officers—whose body cameras were not on—shot and killed the owner of a local barbecue food stand early Monday morning.

David McAtee, 53, who ran YaYa's BBQ in Louisville's West End, was among a group of people who were gathered in the late hours in a store parking lot next to McAtee's stand. Both Louisville police and National Guard troops were there to break up the gathering—Louisville had instituted a curfew. The police claim somebody opened fire on them and that they returned fire, striking and killing McAtee.

Nobody has claimed that McAtee was the shooter. In fact, it's not clear if anybody even shot at the police in the first place because the officers on the scene did not have their body cameras on.

Louisville was already dealing with one horrible police scandal—Breonna Taylor was shot and killed by police in a botched no-knock raid. Officers stormed the home of Taylor and her boyfriend Kenneth Walker on March 13 looking for evidence of drug trafficking. The couple, believing they were the victims of a break-in, called 911. Walker shot at the police in the self-defense, the police fired back, and Taylor was shot and killed.

As Reason's Zuri Davis has reported, Louisville police attempted to pin the blame on Walker and arrested him on charges of felonious assault and attempted murder of a police officer. In the wake of that scandal, Police Chief Steve Conrad announced his plans to retire at the end of June.

The fatal police shooting of David McAtee—by officers whose body cameras were turned off—has prompted Louisville Mayor Greg Fischer to take stronger action against the police chief. The mayor fired Conrad on Monday, a month before Conrad was scheduled to retire. Deputy Chief Robert Schroeder has been put in charge.

McAtee's death is now being investigated by both the Kentucky State Police and the FBI. Schroeder has said there will be "discipline" for the officers who failed to turn on their body cameras.

Police resistance to body cameras may sound like a small story amid the present mayhem, but there is no denying the importance of cameras and other recording devices when it comes to documenting police misconduct. In Columbus, Ohio, for example, where the police used pepper spray against nonviolent protesters, many officers on the scene were not wearing body cameras and also lacked visible badge numbers on their uniforms because such items are not compatible with their riot gear, according to a Columbus police spokesperson.

Early studies suggested that the use of body cameras by the police could lead to less violent encounters between cops and citizens. Of course, those studies assumed that the cameras are turned on in the first place. Other researchers have since come to mixed conclusions, however. In some studies, for example, the use of body cameras resulted in fewer use of force complaints when compared to police departments that didn't use them. But still other studies have found no significant differences in police conduct when body cameras are present.

Even if body cameras are not the solution to the problem of police misconduct, they nevertheless remain a good tool for holding officers accountable for bad behavior and also for exonerating those officers who are unfairly accused. Too bad there is no footage to show us exactly what happened when the police shot David McAtee.