The CDC Is Still Botching the Coronavirus Testing Process

The disease control agency is a poster child for bureaucratic incompetence. 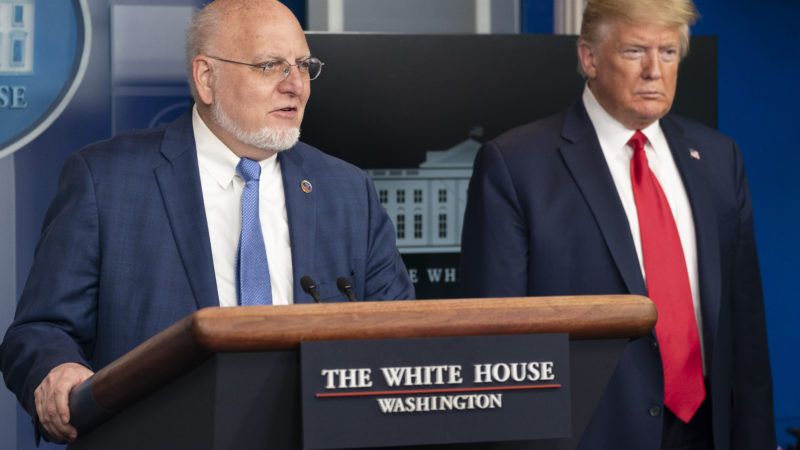 Over and over again, the Centers for Disease Control and Prevention (CDC) have bungled the response to COVID-19. The agency is supposed to stand at the forefront of the federal government's defense against pandemics, but in the effort to track, identify, and slow the spread of the novel coronavirus, it has repeatedly proven that it's not up to the task.

Yet as The Atlantic reported yesterday, the agency has been conflating the results of two very different tests: viral tests, which determine if an individual is sick right now, and antibody tests, which are designed to reveal whether an individual has ever been exposed to the pathogen. This makes it impossible to determine the true spread of the virus at any given moment. As The Atlantic's Alexis Madrigal and Robinson Meyer write, combining the results of these two tests without providing a breakdown of how many fall into which category is, "at best, a debilitating mistake."

It isn't the first such error the CDC has made. At nearly every stage of the crisis, the agency has botched the job in small and large ways that continue to cripple our response. The agency is a poster child for bureaucratic incompetence.

Early in February, the agency misreported the results from mislabeled test samples taken from a group of individuals who were being quarantined at a San Diego military base after being evacuated from Wuhan, China, where the virus originated. The CDC initially informed the group that, following testing, everyone was negative for the virus. But after the mislabeling was discovered, it turned out that one woman had tested positive—and had been released from the hospital to return to quarantine on the base. The mixup was blamed on a miscommunication with the hospital.

A far more consequential error also occurred in February, when the agency botched the development of the first batch of test kits that states were supposed to use to begin the testing process. The CDC had already declined to use a German test backed by the World Health Organization, preferring to create its own, as is typical for the agency. This cost several weeks during the time when the virus was just beginning to spread in the U.S. And when the CDC did send out test kits to states, the majority of those kits delivered faulty results. Crucial elements of the test kits were "terribly designed," a scientist who studies viruses told Vice. Only when the testing process was turned over to the private sector was it put back on track.

In developing the faulty kits, the CDC had made basic scientific mistakes. Eventually, an agency spokesperson admitted that the agency "did not manufacture its test consistent with its own protocol." The errors were simple and avoidable, and they have consistently left independent experts aghast. "The incompetence has really exceeded what anyone would expect with the C.D.C.," one Harvard epidemiologist told The New York Times in March. "This is not a difficult problem to solve in the world of viruses."

And in doing so, they cost the country the one thing it did not have to spare in the crisis: time. A virus spreads like a fire. Quickly stamp out the initial sparks, and it won't grow. Let a spark turn into a larger blaze, and it becomes far more difficult to manage. But you can't stamp out the sparks if you can't see them. Without functioning test kits, the country could not determine COVID-19's spread, could not see who was infected and where, and could not respond appropriately.

Months later, as reporting snafus make clear, the CDC is still making easily avoidable mistakes. And they are still costing us time we do not have.

The CDC is not alone in its errors. Several states have been blending their test results as well, rendering it difficult to determine the local impact of the virus. But the CDC's role as the officially designated first line of defense makes the agency's failure far more significant. Without clear, reliable, and accurate reporting from the CDC, it becomes nearly impossible to take stock of the pandemic's damage.

The virus has upended American life in ways that make it unusually difficult to predict the future. But thanks to the CDC, we have a problem that is even worse: No only do we not know what is going to happen, but we don't know what is happening.

From the outset, the CDC has contributed to the already considerable uncertainty and instability of the moment, failing at the most basic and essential tasks it has been charged with carrying out. Its many failures are a reminder that centralized systems with a single point of failure tend to heighten risks in moments of crisis. And it's a stark warning to all those who see the crisis as an argument for giving federal authorities more power in crises like this: That means giving more authority and more responsibility to agencies like the CDC, with all the lethal consequences that could result.