Trump Is Gutting the Inspector General System, and Most Republicans Don't Care

Congress created inspectors general to be watchdogs, but it's too weak-willed to protect those watchdogs from retaliation. 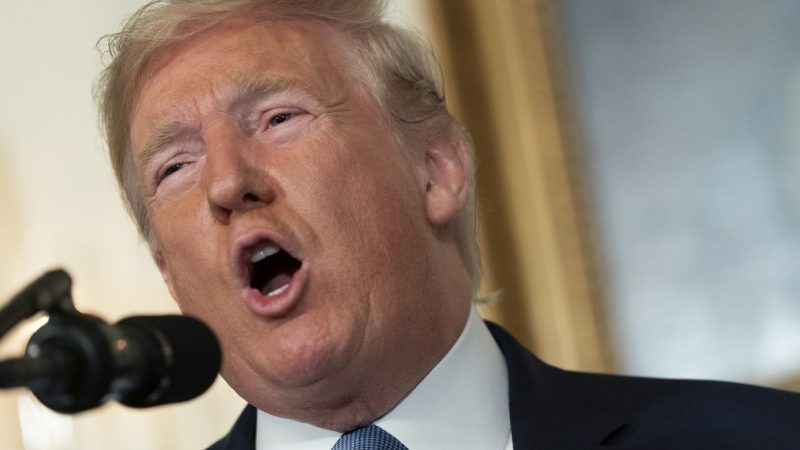 Politico also reported today that Linick had recently finished an investigation into a Pompeo aide and concluded she had likely failed to report allegations of workplace violence.

Friday's moves follow a string of dismissals that congressional Democrats and government accountability groups say is a purge of the inspectors general system by the Trump administration. The president has then filled those watchdog positions with political allies.

"The president is essentially driving a semi-truck through the fundamental structure of inspectors general," says Liz Hempowicz, director of public policy at the Project on Government Oversight (POGO), a government accountability group.

In April, Trump fired Michael Atkinson, the inspector general of the intelligence community. Atkinson's referral of a whistleblower complaint to Congress launched the Ukraine investigation and eventual impeachment of Trump, and the firing was widely seen as retaliation.

Inspectors general are independent offices that investigate waste, fraud, and abuse at federal agencies. They regularly audit agencies' compliance with mundane rules and record-keeping, as well as investigate whistleblower complaints about misconduct.

Their investigative powers give them access to records and officials that the public and reporters don't have, and as such, they fill an important role as watchdogs within the federal government. (Take, for just one example, a 2015 Justice Department Inspector General investigation that found that Drug Enforcement Administration agents assigned to South America were having sex parties with prostitutes hired by drug cartels.)

To do their job, inspectors general are supposed to be insulated from political pressure. They don't report to agency heads, and although they're appointed and can be fired by the president, the president must give Congress 30 days' notice before any firing, along with reasons for the removal. (Trump subverted even this modest requirement in Atkinson's case by placing him on immediate leave.)

"If you go through the legislative history of the Inspector General Act of 1978, it's abundantly clear that Congress never intended for inspectors general to be treated the same way as other political appointees, because their jobs are so incredibly different," Hempowicz says. "The main difference is IGs are supposed to do their job independent of politics."

But the Trump administration, despite the president's pledge to "drain the swamp," is hostile to any oversight and has no use for inspectors general except as toadies and rubber stamps. Trump said he fired Linick at the request of Pompeo, but so far the administration has not given any detailed explanation, except that the president "lost confidence" in him.

And congressional Republicans, once champions of oversight and accountability during President Barack Obama's administration, have become mute or blasé on the subject.

Speaking about Linick's firing, Sen. Ron Johnson (R–Wis.) told CNN's Jake Tapper over the weekend that, "I'm not crying big crocodile tears over this termination. Let's put it that way."

Although the Obama administration declared itself "the most transparent administration in history," it occasionally clashed with inspectors general as well. There was the time Environmental Protection Agency (EPA) employees obstructed an investigation into an EPA senior official who bilked the agency out of $900,000 by pretending to be a CIA agent, for example.

The most significant move by the Obama administration came in 2015, when the Justice Department's Office of Legal Counsel (OLC) issued an opinion that the inspector general must ask the Justice Department for access to sensitive information like grand jury records, wiretaps, and credit reports.

"It's just incredibly important to have permanent inspectors general that are completely independent that will provide Congress and the American public transparency and that watchdog assignment—that responsibility for departments and agencies—so that we have awareness of what's happening. It's the only way we're going to be able to improve the efficiency, the effectiveness, the accountability of government is to have that type of transparency."

The conservative Heritage Foundation released a 2015 report on the OLC opinion that concluded it "undermines the IG's ability to conduct his investigatory duties, which costs taxpayers time, money, and trust in their government."

"If the Inspector General deems a document necessary to do his job, then the agency should turn it over immediately," Senate Judiciary Committee Chairman Sen. Chuck Grassley (R-Iowa) said. "The prospect of the Obama administration using this opinion to stonewall oversight, avoid accountability, and undermine the independence of inspectors general is alarming."

To his credit, Grassley is one of the few Republicans—along with Sen. Mitt Romney (R–Utah) and Sen. Susan Collins (R–Maine)—who has voiced concern over Trump's firing of Linick. In a letter to Trump Monday, Grassley wrote inspectors general "should be free from partisan political interference, from either the Executive or Legislative branch" and asked Trump to "provide a detailed reasoning" for Linick's removal by June 1. Grassley sent a similar letter after Atkinson's firing, but he is still waiting on a response.

Grassley is in a rather lonely spot right now, though. If Congress wants to maintain any vestige of respectability—or even any indication that it's still a functioning branch of government rather than the executive's doormat—it needs to reassert its power to protect independent inspectors general, regardless of which political party holds the White House.