Josh Hawley Wants To Wreck America's Economy To Own the Libs

In a Senate floor speech Wednesday, Hawley outlined a half-baked plan to tear down global trade. It's aimed at winning elections, not helping America prosper. 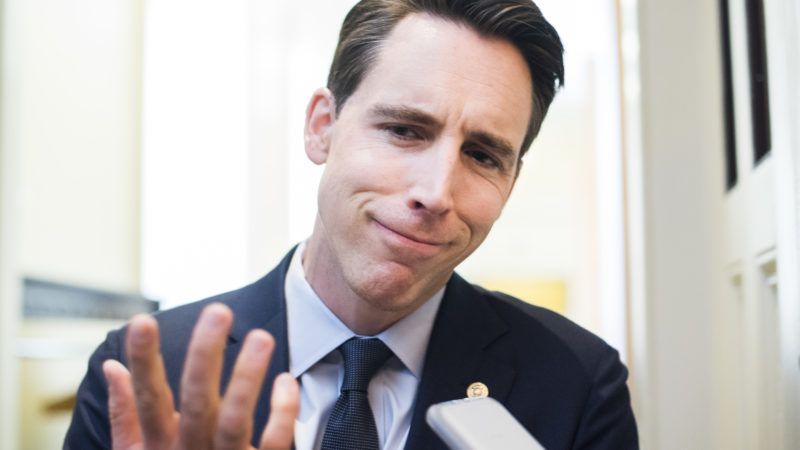 It was touted as a speech outlining how America should reform the global economy and stand up to China, but Sen. Josh Hawley's (R-Mo.) remarks on the Senate floor Wednesday were directed at a decidedly domestic audience.

Hawley is a rising star among Republicans jockeying to be the heir apparent to President Donald Trump as the party's nationalist standard-bearer. The 40-year-old senator has seized on the COVID-19 pandemic as a way to advance the anti-China hawkishness that helped Trump win the White House in 2016. On Wednesday he outlined a Trump-like platform based on acting tough, blowing up international institutions, and building on economic illiteracy.

It was, in short, a speech meant to appeal to the Make America Great Again crowd rather than a serious attempt at charting a new direction for America.

"The international order as we have known it for 30 years is breaking," Hawley intoned with senatorial gravitas. Later, he rhetorically asked if Americans are "willing to witness the slow undoing of the free world."

But that's an odd way of framing the debate, considering Hawley wants completely undo the U.S.-led agreements that make free trade possible. Along with China, the current target of his crusade is the World Trade Organization (WTO), the most visible entity of the largely invisible global economic system that Hawley maligns. It is this system of freely exchanged goods across national borders that Hawley claims is responsible for flatlining Americans' wages and shipping American industries overseas.

He's wrong on the facts. According to the Bureau of Labor Statistics, inflation-adjusted median weekly earnings for American workers have increased by 17 percent since 1995, when the WTO was founded. Meanwhile, American manufacturing has never been more valuable than it is now, as the country's industrial production last year was 48 percent higher than in 1995, according to the Federal Reserve.

Just as importantly, Hawley's wrong on the economics. Withdrawing from the WTO would leave America cut off from the lower tariff rates that member nations grant to one another, effectively raising barriers to American exports and harming American manufacturing and farming. The global trade that's possible because of America's membership in the WTO boosts the U.S. economy by $2.1 trillion every year, according to an estimate from the Peterson Institute for International Economics, a trade-focused think tank.

And he's wrong about the geopolitics, too. Contra Hawley's claims, the WTO did not simply materialize in the mid-1990s nor can it be easily replaced. It was the result of a decadeslong experiment in expanding the economic co-dependence of the world's largest economies. That experiment increased prosperity and reduce major wars across the planet.

Nationalism doesn't work without someone to nationalize against, and Hawley sees China as the foe in a new cold war. "The economy has become the principal arena for great power contests in this new century," he said Wednesday. "Economic policy is now security policy."

Before getting more pugilistic with China, Hawley might want to take a closer look at how the Trump administration's supposedly "good and easy to win" trade war has gone. Here's a hint: Not well.

Some of Hawley's complaints about the Chinese government are accurate. He's right, for example, to call out the Chinese Communist Party's awful human rights record and its ongoing abuse of religious minorities. He's right that merely giving China access to global trading networks has not resulted in speedy liberalization of China's politics or the collapse of the Communist Party. While Hawley may be partly correct about the problem, that does not justify his proposed course of action.

What he's proposing goes beyond anything even the anti-trade Trump administration has endorsed. In fact, U.S. Trade Representative Robert Lighthizer, one of Trump's top generals in his trade war against China, has called the WTO "a valuable institution" that helps advance America's interests. "If we did not have the WTO, we would have to invent it," Lighthizer told the Senate Finance Committee last year.

Hawley's hawkishness towards China and the WTO might be smart domestic politics in his bid to become the heir to Trump's place in the Republican Party, but it's based on a flawed understanding of economics. Not only that, but Hawley's trade proposals would be economically ruinous for the United States and clear the way for China to further exert itself as the largest economy within the WTO.