Is America Headed for a Post-Coronavirus Traffic Apocalypse?

Substantial numbers of people returning to work, but avoiding the buses and trains that took them there, could see urban travel speeds grind to a halt. 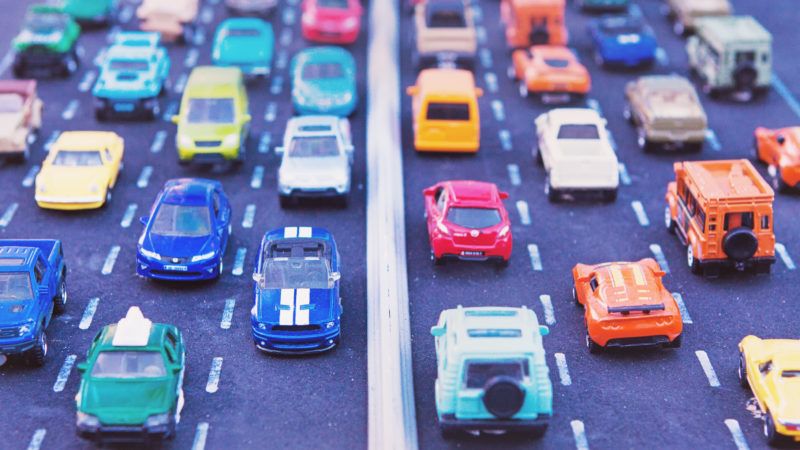 America's eerily empty highways could soon become the site of apocalyptic gridlock as people start returning to work but keep avoiding the crowded buses and trains that once took them there.

Transit ridership plunged some 80 percent in major American cities during the peak of the coronavirus shutdowns, according to the transit app Moovit. Individual transit agencies in New York City, San Francisco, and Washington, D.C., have reported declines of 90 percent or more.

Passenger auto travel, by comparison, only fell about 60 percent nationwide between the end of February and mid-March, according to traffic analytics firm INRIX, and has since started to rebound. INRIX reports that traffic volumes are now back to 75 percent of their late February levels. Transit ridership, however, has seen a far less dramatic bounce back.

"People are starting to jump back faster into their cars than public transit," said World Bank urban transportation specialist Leonardo Canon Rubiano, to The Washington Post. "Everyone is reassessing how much they need to move, even beyond the virus."

That same Post story included interviews with commuters from around the world who have expressed concern about taking transit in a world where businesses are open but COVID-19 is an ongoing concern.

If a lot of these riders end up switching over to driving, there's the potential for major spikes in travel times for some cities.

"If you have a growth in the number of cars in the roadway and not significant changes to the supply of the network, more cars on the road may correspond to longer travel times," says Dan Work, an associate professor of civil engineering at Vanderbilt University.

Using American Community Survey data from the Census Bureau, Work and his fellow researchers have estimated the impact on travel times in different American metro areas if riders and carpoolers switched to single-occupancy vehicles.

"The peak of rush hour in the Manhattan grid below 59th Street averages between 5 and 6 miles per hour" before the pandemic, Alex Armlovich, an urban policy expert with the Manhattan Institute, tells Reason. "If we tried to squeeze more simultaneous [vehicles] at the same time, you could see that speed fall to 3 miles per hour."At those speeds, Armlovich says, some drivers might end up parking in a garage and walking the last few miles of their commute.

Not all cities face such dire consequences, says Baruch Feigenbaum, the senior managing director of transportation policy at the Reason Foundation (which publishes this website).

It's important to separate New York and San Francisco "from places like Atlanta and Paducah, [Kentucky]" says Feigenbaum, where people rely on transit far less. "A switch there is not going to have that big of an impact."

The Vanderbilt study estimates daily travel times in cities like Washington, D.C., and Los Angeles, which have moderately high shares of transit commuters, would only see travel time increases of a couple of minutes.

Even in those cities that do have high levels of transit usage, Feigenbaum says, the fears of a post-coronavirus traffic apocalypse could be overblown. Some people, he notes, don't own cars or can't afford them, and will therefore not be able to make the switch immediately. Those that do might be traveling to areas of the city that have spare road capacity.

On top of all of this is the potential for millions of former commuters to work from home for the foreseeable future. That could mean traffic levels won't hit their pre-pandemic peak, even if a lot of transit riders do end up becoming motorists.

But in a world where people remain wary of transit and work from home arrangements don't absorb huge numbers of commuters, some cities will have to consider major policy overhauls.

Congestion pricing is a solution both Feigenbaum and Armlovich recommend. This would involve charging motorists a variable toll on certain roadways that would rise or fall depending on congestion levels.

The hope is that this would moderate traffic flows by encouraging people to travel during off-peak hours, while allowing those who have to travel during rush hour to pay a price to avoid bumper-to-bumper traffic.

I-66 in northern Virginia has a congestion-priced toll lane. New York is in the process of implementing its own version of congestion pricing which would charge drivers a fee for entering Manhattan south of 60th Street.

Another option for cities would be deregulating micro-mobility services like Bird, Lime, or Jump that allow people to rent dockless electric scooters and bicycles off the street via a smartphone app.

"Cities took this incredibly draconian regulatory approach to the evil private companies who are trying to help people move around by non-car means. They put special taxes on micro-mobility devices, they were slow to add new infrastructure," says Armlovich.

This includes the two cities that would be hardest hit by a sudden surge in vehicle traffic.

San Francisco sent cease-and-desist letters to scooter companies when they first started operating in the city, and even impounded their vehicles. The city later allowed some companies to keep operating, but only after they agreed to onerous permitting conditions.

New York had banned electric scooters and bikes until April of this year, when they were legalized as part of the state's budget deal. Still, scooters remain banned in Manhattan (although the city can opt to change that).

The smaller amount of space that these "active transport" vehicles need would make them an ideal alternative for former transit riders in space-constrained areas like Manhattan, says Armlovich

"The ceiling on the amount of road space we can add and the number of people you can move per square foot of road space per single occupancy vehicle substantially favors active transport for people who are avoiding mass transit," he tells Reason. "I think that suggests we should be looking at reallocating street space to those active transport uses."

"Biking and e-scooters are not substituting for car travel because they're typically for relatively short distances," he says, arguing reallocating street space from cars to bikes and electric scooters will mostly serve to hurt suburban commuters who are traveling into the city from far away.

In some sense, this debate is premature. We don't know how much of a risk transit will pose to spreading coronavirus, particularly as more people wear masks and transit agencies continue their stepped-up sanitation efforts. COVID-19 is all but extinct in ultra-dense, transit-dependent Hong Kong, for instance.

Perhaps some mix of universal mask-wearing and fatigue over social distancing will see people take transit at the same rate they did pre-pandemic. The less they do, however, the more some cities will have to consider out-of-the-box solutions to allow for urban life without endless gridlock.