Businesses need to be able to adjust to a world where COVID-19 remains an ongoing concern. 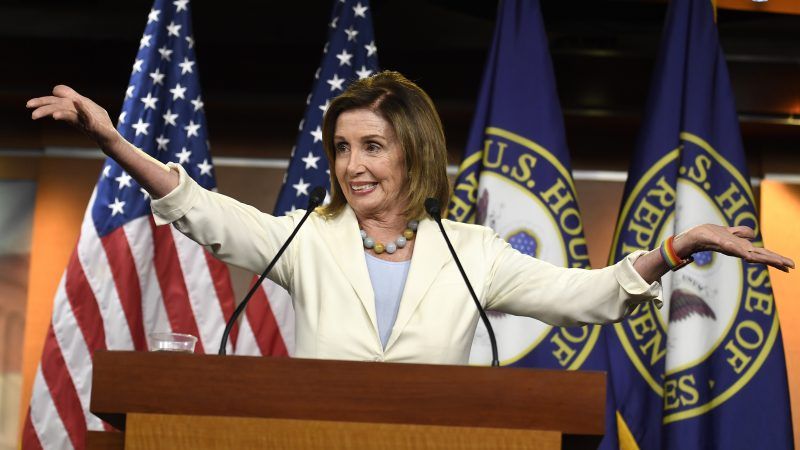 House Democrats' introduction of a fourth coronavirus relief bill has kicked off an intense debate between liberals and populists on both the left and right. At issue: how best to keep the country's economy in suspended animation until we can return to pre-pandemic normality.

Meanwhile, local leaders' decisions to constantly push back the dates for when they plan on phasing out their lockdown orders—not to mention the anemic effects of the phase-outs that have already happened—suggest that we may be a long way from anything approaching business as usual.

All the plans to keep the economy in stasis until then, whatever their details, run the risk of creating a zombie economy that is prevented from adjusting to the economic needs of a country where COVID-19 is an ongoing concern.

The current fight is over Speaker of the House Nancy Pelosi's introduction of the 1,800-page, $3.2 trillion Health and Economic Recovery Omnibus Emergency Solutions (HEROES) Act. The bill includes an extension of already-boosted federal unemployment benefits to January 2021. Those expanded benefits, which give recipients $600 on top of the money they'd already be entitled to, often mean people can make more money staying home than returning to work.

The HEROES Act also expands existing tax credit programs that cover fixed costs and payroll for businesses that have shut down, been forced to close, or seen significant revenue declines because of COVID-19.

"The hardship of losing a job or tragically losing a loved one doesn't take a pause. This is an historic challenge and, therefore, a momentous opportunity for us to meet the needs of the American people," said House Speaker Nancy Pelosi as she introduced the bill on Tuesday.

These measures have not proven enough for Democrats like Rep. Pramila Jayapal (D–Wash.), co-chair of the House Progressive Caucus, who slammed Pelosi's extension of jobless benefits as essentially accepting mass unemployment.

With more than 33 million people filing for unemployment in 7 weeks, workers are looking for certainty about how we end mass unemployment and how they'll get their next paycheck.

This legislation doesn't end mass unemployment and it doesn't get paychecks back into their pockets.

Instead, Jayapal has introduced legislation that would have the government effectively nationalize the payrolls of businesses affected by the coronavirus. Her Paycheck Guarantee Act would provide grants to employers to cover 100 percent of their payroll expenses for employees earning up to $100,000 a year. As an incentive to rehire laid-off workers, Jayapal's bill would make these wage subsidies retroactive to March 1. Businesses would not be required to maintain minimum hours of service to receive support.

A Moody's Analytics estimate of the Jayapal's legislation finds that it would cost $654 billion over six months, once you account for the savings from not paying for laid-off workers' unemployment insurance and Medicaid.

This proposal is modeled on policies adopted in Denmark, Germany, and the United Kingdom. It's also pretty close to the Rehire America plan that Sens. Josh Hawley (R–Mo.) and Cory Gardner (R–Colo.) announced on Thursday. This proposal—a more detailed version of a plan Hawley announced in early April—would pay firms 120 percent of the wage costs of workers they rehire. It would also cover 80 percent of payroll expenses for workers currently on staff.

This support would be capped at $50,000 per employee. Any business that's seen a 20 percent decline in revenue would be eligible for support under the senators' plan. The two are also proposing grants to cover businesses' other fixed costs, including rent and utilities.

Hawley, like Jayapal, is framing his Rehire America plan as a way to help workers that the HEROES Act abandons to unemployment.

"We should put forward a proposal that is focused on jobs in contrast to what House Democrats are doing. They could have done something like this. They had an opportunity to put forward a jobs proposal and they didn't," Hawley told Politico.

Differing details aside, all these proposals are premised on the idea that we need to tide employees and firms over until a general economic reopening occurs and we can all get back to work.

Yet it increasingly appears that we are a long way off from a return to pre-crisis economic normality.

This week, the mayors of both New York and D.C. said their stay-at-home orders would last into June. County officials in Los Angeles have said their shut-down order will be in effect for another three months, although some phased reopenings may happen before then.

Meanwhile, the states that have reopened have seen anemic economic recoveries at best.

Slate's Jordan Weissman, using data from the app Open Table, notes that restaurant reservations are down as much as 92 percent from last year in those states that have allowed dining rooms to reopen.

A ranking of state jobless claims released yesterday by the personal finance website Wallethub finds that the number of people applying for unemployment is especially high in Connecticut, which had a bad COVID-19 outbreaks and a strict shutdown order, but also in Georgia and South Dakota. The former is lifting its shutdown order, and the latter never imposed one.

This matches with new research showing that economic activity declined at similar rates regardless of when states issued formal lockdown orders. Individuals, not the government, shut the economy down. They'll also decide when, or if, it reopens.

That's partially good news. If people are social distancing on their own, we don't need to keep coercive lockdown orders in place.

Nevertheless, if we can't expect much of the pre-pandemic economic activity to return, that dramatically weakens the case for propping up businesses as Jayapal and Hawley want to do, or paying workers to stay jobless like the HEROES Act does. Both policies stymie markets' ability to adjust to COVID-19 while shifting resources from those parts of the economy that can be productive during a pandemic to those that can't. If there's no demand for air travel, we'd be better off seeing baggage handlers shift to being warehouse workers or grocery delivery drivers. We want cooks and cashiers to move to restaurants that can figure out a way to stay profitable without dining service.

That doesn't mean the government can't provide relief. Even if we allow those readjustments to happen, we'll still probably have a less productive economy for a while, and the negative effects of that will be concentrated on people who aren't in a position to adapt. So there's a reasonable case for cash transfers targeting the poorest Americans. But they shouldn't be conditioned on staying at their current jobs, and—unlike unemployment benefits—they shouldn't be conditioned on staying out of the labor force altogether.

The innovation-breeding creative destruction of free markets is important during good economic times. In a pandemic, it's essential.