A state trooper believed a man driving by and flipping the bird at the cops constituted disorderly conduct. (It didn't.) 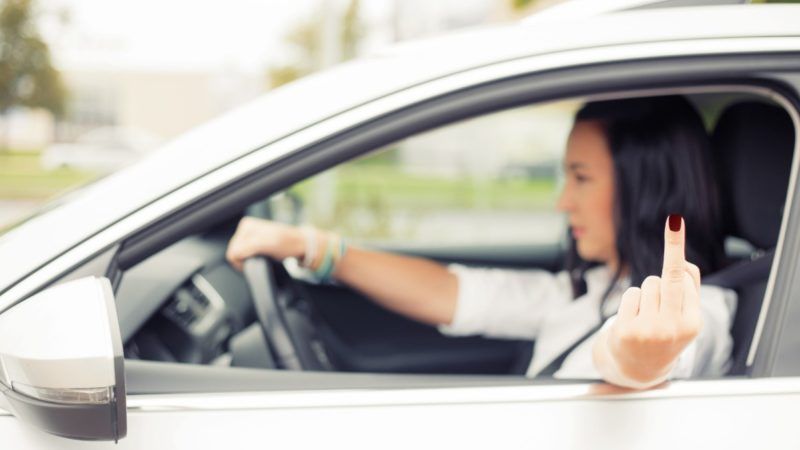 Thankfully, flipping off a police officer while driving is not enough of a justification for them to pull you over.

On January 9, 2017, Paul Stevens, a trooper for North Carolina State Highway Patrol, and Adam Torres, an officer with Albemarle Police Department, were helping a stranded motorist in Stanly County. Their patrol lights were activated at the scene. While providing assistance, Stevens observed Shawn Patrick Ellis, a passenger in a passing car, waving his arm out of the window and then pumping his middle finger in an up-and-down motion. Believing Ellis was engaged in disorderly conduct, Stevens pursued the car and pulled it over. At no point did the driver break a traffic law during the half-mile pursuit.

When Stevens approached the car, both the driver and Ellis initially refused to show their identification. The driver changed her mind and complied. Ellis continued to refuse, prompting Stevens to take him back to his patrol vehicle. After Ellis finally gave his name and date of birth, Stevens cited him for resisting, delaying, or obstructing an officer.

While on trial for obstruction, Ellis attempted to file a motion to suppress evidence—Stevens' testimony of the events—based on the fact that Stevens did not have reasonable justification to make the stop in the first place. The trial court denied the motion.

The matter was then taken to the North Carolina Court of Appeals. The appellate court ruled in August 2019 that Stevens had "reasonable suspicion" of disorderly conduct to make the stop and that "it was not obvious to the trooper that Defendant was simply engaging in free speech toward him when he was gesturing out of his vehicle window."

The majority also found Stevens "justified in further detaining" Ellis because he had initially refused to identify himself.

Judge John Arrowood dissented, commenting that Ellis' actions were "distasteful" yet "within the realm of protected speech under the First Amendment of the United States Constitution." Arrowood used Stevens' own account of Ellis waving a hand and flipping the bird, and the fact that Stevens was the only person to provide testimony, to argue that the stop lacked reasonable justification.

On Friday, the North Carolina Supreme Court reversed the appellate court's decision, explaining that the facts of the case were "insufficient to provide reasonable suspicion that [Ellis] was engaged in disorderly conduct:"

In a footnote, the Court said it would not address the application of the First Amendment in the case because "there was no reasonable suspicion for the stop."

Cops pulling drivers over for raunchy expression is not new. But if you're going to take the risk, courts have already ruled in favor of the following behaviors: Flashing your headlights to warn of speed traps up ahead; playing NWA's "Fuck tha Police" in the presence of an officer; and proudly displaying an "I Eat Ass" bumper sticker.