The Myth of the Bleach-Drinking Masses

Plus: states start opening up, Libertarian Party nominating convention on hold, and more... 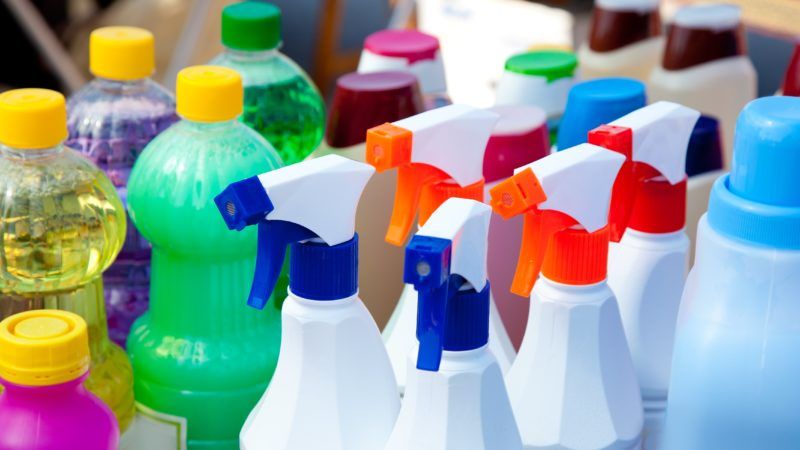 Thankfully, the bleach-drinking trend is mostly hype. U.S. media seem determined to find an influx of people consuming bleach and other household cleaners because of President Donald Trump's comments. Over the weekend, an array of news reports on calls to poison control centers in March and a craftily-titled New York Daily News article were either deliberately framed to give the impression of a new spike in Americans "drinking bleach" or nonetheless shared as evidence of such by many in the media. I wrote about the discrepancy, which means that people keep sending me every new story related to poison control calls or people having adverse reactions to disinfectants. So let's take a look at some of those…

"Georgia men drink disinfectants in attempts to stop coronavirus," says a headline in the Atlanta Journal-Constitution. The paper states that two men, both with histories of psychiatric issues, had "drank liquid cleaning products over the weekend in misguided attempts to ward off COVID-19" (both "are expected to recover").

"The poison center's director, Gaylord Lopez, said he did not know if the men guzzled the chemicals because they heard about President Donald Trump's statements," it continues. "Since the pandemic began, at least two other Georgians have fallen ill from similar attempts to clean their inner organs with household chemicals, even before Trump's remarks."

The Journal-Constitution notes that Georgia's "biggest spike in poisonings from cleaning products has been caused by home-bound Georgians mixing products together to furiously scrub surfaces, then falling ill from inhaling fumes. Last year, the poison center handled 49 product-mixing calls in March and April. This year, since March 1 the center has had 115 calls," according to the state poison control director.

Many have pointed to an April 25 warning from Illinois' public health director as evidence of people intentionally ingesting cleaners because of Trump. But the two-day spike in calls to poison control mentioned was compared not with some time during the pandemic yet before Trump's comments, but the same days in April 2019. And a reported 60 percent increase in calls was for March and April 2020 compared to March and April 2019.

As for the two supposed victims of Trump's comments, Chicago's WTTW says only that "the Illinois Poison Center says it has since received calls on two cases about individuals 'who were exposed to disinfectants from inappropriate use.'" Health director Ngozi Ezike mentioned "some recent examples" [it's unclear from when] including "the use of detergent solution for a sinus rinse" and "gargling with a bleach and mouthwash mixture in an attempt to kill coronavirus."

In Kansas, a man reportedly drank some sort of cleaning product over the past weekend. Kansas Department of Health and Environment Secretary Lee Norman said at a press conference that he had heard from the state's poison control director about a man who had consumed the cleaner "because of the advice that he received." Norman also mentioned a more than 40 percent "increase in cleaning chemical cases" over some time period.

News outlets have reported on spikes in calls to poison control centers and public health warnings against quack cures since the start of the COVID-19 outbreak (albeit to less fanfare). "The Blue Ridge Poison Center in Charlottesville is asking people not to drink bleach to try and prevent COVID-19 infections," reads one sample headline, from March 13. "No, Snorting Cocaine and Drinking Bleach Won't Cure Coronavirus, Despite Rumors," says a March 12 headline from Rare.

The conspiracy theorists of QAnon were promoting bleach as a cure for the coronavirus back in January. "Can you cure this strain of Coronavirus by drinking something called 'Miracle Mineral Solution?'" some public service journalism from WUSA9 pondered on January 30. "Answer: No. MMS is a type of bleach. Please, don't drink bleach."

None of this is to deny recent reports of people calling government hotlines with more questions about whether household cleaners could kill the coronavirus, nor to justify Trump's public ramblings about nonscientific nonsense or the ridiculous post hoc narratives his supporters and lackeys built around them.

But we're starting to reach moral-panic proportions about a supposed trend for which there's very little evidence of it actually existing. It's frustrating to see huge swaths of professional news media spreading it (sometimes with more satisfaction than dismay).  And, hey, this is sort of good news—no sudden epidemic of American bleach drinkers, everyone! Just a perpetual onslaught of this sort of misinformation and quackery…

Last August, Ars Technica reported on a new Food and Drug Administration warning against bleach drinking. "The warning may seem unnecessary, but guzzling bleach is an unfortunately persistent problem…According to a June [2019] investigation by NBC News, poison control centers across the country have seen 16,500 cases involving chlorine dioxide since 2014," resulting in at least eight deaths.

States are starting up again, following Georgia's foray into lifting a layer of shutdown orders this week. From The New York Times:

Texas, with its population of nearly 30 million, made one of the most expansive moves toward reopening when Gov. Greg Abbott announced that retail stores, restaurants, movie theaters and malls would be allowed to reopen with limited capacity on Friday. In Ohio, Gov. Mike DeWine unveiled a more incremental reopening plan that would allow manufacturing work to resume and offices to reopen next week. And in Colorado, businesses tried to navigate new rules allowing some of them to open their doors on Monday….

In states that were hardest hit, leaders have been more tentative. In New York, Gov. Andrew M. Cuomo on Monday said that what he called low-risk businesses upstate could begin reopening by mid-May, but he cautioned that shutdown orders were likely to be extended for many parts of the state.

Although the states around Louisiana have started easing restrictions, Gov. John Bel Edwards said on Monday that he was extending his state's stay-at-home order into next month. "The fact is," Mr. Edwards said at a briefing, "we just don't meet the criteria."

The Libertarian Party's May nominating convention is on hold. The party reports that "the Libertarian National Committee has a pre-scheduled teleconference meeting regarding the convention scheduled for Saturday, May 2nd, at which they are able to officially take action(s) regarding the 2020 Libertarian National Convention… The Convention Oversight Committee has already been looking for other venues in Austin and other cities with dates in July of 2020, as a potential contingency."

Update: "The reports of that convention's death are greatly exaggerated," Daniel Fishman, executive director of the Libertarian Party," wrote me on Tuesday afternoon. "It is very likely that the planned convention with 3000 people (including vendors and partners etc) is not going to happen, but there may be a smaller event in Austin that weekend, or something postponed till July or perhaps an electronic balloting.  We simply don't know yet."

This is a major expansion of program after Ds & Rs complained.