Dairy industry-endorsed regulations required skim milk to be labeled as “imitation” if it hadn’t been enriched with added vitamins. 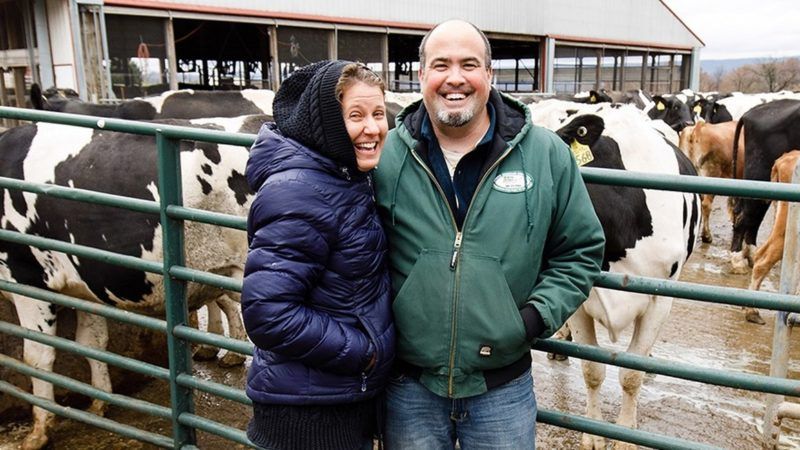 The Food and Drug Administration (FDA) has given dairies and creameries the official permission to label their skim milk as "skim milk." Huzzah!

An explanation is warranted, obviously. By any conventional definition, skim milk is milk with the fat or cream removed—skimmed off. But the government defines "skim milk" differently. According to FDA guidelines, in order to be called "skim milk," dairies had to add vitamins A and D to the milk before it could be lawfully distributed.

Dairies or creameries who did not add those vitamins were prohibited from labeling their skim milk as skim milk. Instead, they were required to call it "imitation skim milk" or "imitation milk product," even though their skim milk was not, in fact, an imitation of anything.

There's a market for "all-natural" skim milk without the added vitamins, and dairies and creameries who want to offer this product have been battling federal and state regulators for years. The Institute for Justice (I.J.), a public interest law firm, has represented several such creameries in court, arguing that these sorts of labeling requirements violate the First Amendment rights of skim milk vendors by compelling them to speak of their product as "imitation" in order to sell it.

I.J. won a notable victory against Florida milk regulators in 2017 when it persuaded the U.S. Court of Appeals for the 11th Circuit to rule in Ocheesee Creamery v. Putnam that the creamery was not "misleading consumers" when it described its skim milk as skim milk.

On Monday, I.J. pointed to a new letter from the FDA which makes it clear that the federal agency no longer intends to enforce the skim milk labeling regulation and no longer intends to push the states to enforce it. In 2018, in response to another I.J. lawsuit, the FDA sent a letter to Maryland-based South Mountain Creamery stating that it would not force the dairy to use the term "imitation" so long as its labels noted that its skim milk was not fortified with added vitamins A and D.

Additional legal wrangling ensued. The FDA attempted to have the South Mountain Creamery's lawsuit dismissed, which would have left the labeling regulation itself untouched. But Judge Yvette Kane of the U.S. District Court of the Middle District of Pennsylvania denied the motion.

Which brings us to the letter that the FDA sent on April 22, which informed South Mountain Creamery that the agency will no longer enforce the "imitation" labeling requirement and will no longer ask the states to enforce it. Furthermore, the letter noted, in the event that the FDA reverts back to enforcing the rule, it will not retroactively punish dairies for selling skim milk labeled as skim milk without the added vitamins.

"The government does not have the power to change the dictionary," said I.J. Senior Attorney Justin Pearson in a statement. South Mountain Creamery's "product was the real thing, not an imitation. It was a clear violation of [creamery owner Randy Sower's] First Amendment rights to force him to use a label that wasn't truthful. Now, this communication from the FDA should allow Randy and other dairy farmers across the nation to sell pure skim milk across the country without fear of prosecution."

On the basis of the new letter, Judge Kane dismissed the lawsuit without prejudice. I.J. President and General Counsel Scott Bullock said in a statement that if the FDA starts enforcing the regulation again, I.J. will return to court.

Reason contributor and food policy expert Baylen Linniken has extensively covered the legal conflicts between creameries and regulators and even served as an expert witness in the aforementioned Florida case. As he has pointed out, the International Dairy Foods Association argued in favor of enforcing the skim milk labeling regulation in that dispute. This gives the entire fight a similar feel to the dairy industry's various attempts to stop companies that manufacture soy milk, almond milk, and similar products from labeling their goods as "milk." Such efforts have little connection to consumer protection. Rather, the dairy industry seeks to hobble its competitors via government regulation.