Amid growing unrest, oil-dependent nations may have no choice but to open their economies. 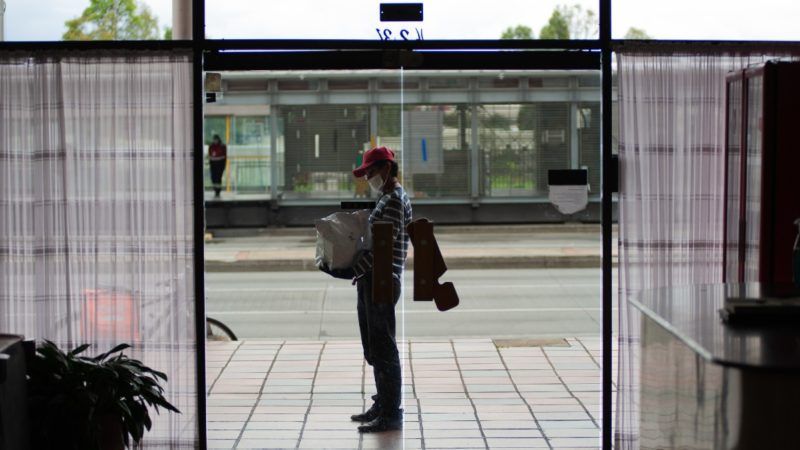 "I would rather die of the virus than of hunger," says Karina Ribullen as she sells surgical masks and coffee in the open-air market of La Parada on the Colombian-Venezuelan border. "If I miss a day of work, my family doesn't eat. It's not bravery, it's desperation."

Ribullen isn't alone. Like most of working-class Latin America, the 46-year-old woman doesn't have savings; she lives hand to mouth working informally in the streets. She pays rent by the day in a shared apartment with her two daughters, ages 10 and 19, and her granddaughter, age 2. They have received no assistance from either the Venezuelan or Colombian governments. Left without another option, she defies a federally mandated lockdown to earn enough money to support her family.

The COVID-19 crisis has presented much of Latin America with an impossible choice: Continue enforcing draconian lockdown methods much stricter than those in the United States while risking economic collapse, or end the protective measures and risk overwhelming critically vulnerable health systems.

Making the dilemma even more painful, the global fall of oil prices is likely to send the oil-dependent economies of Venezuela, Colombia, and Ecuador into severe regional economic depression. Some experts warn of a looming regional debt crisis as governments find themselves unable to meet their payment obligations.

Meanwhile, a ravaged Latin American working class reels from 6 weeks of an economic freeze. Normal work is on hold, governments have been slow or unable to deliver emergency protections, and unrest is growing.

On April 23 in Upata, Venezuela, hungry protesters raided shops and open-air markets in riots that were put down violently by police and armed gangs. Hunger-driven protests have since spread to more than 15 Venezuelan cities, as acute gasoline shortages make food distribution more difficult and as the global crisis worsens an already astronomical inflation.

In Colombia, there are nearly nightly protests. In the southern neighborhoods of the capital, Bogotá, vulnerable citizens have taken to hanging red cloths in their windows as a call for help and a symbol of growing hunger.

The World Bank's April report on Latin America predicts a 3–4 percent drop in GDP across the region, adding that the impact could be worse if oil stays weak. It further warns that a depressed economy could lead to a return to the broad social unrest of 2019, when mass protests swept the region. South America might not be able to endure a frozen economy for much longer.

Sergio Guzman is an analyst and director at Colombia Risk Analysis, a consultancy and political risk assessment group. "The [Colombian] government is caught between a rock and hard place," he says. "People are running on fumes. Unless the government can restart the economy soon, they will be facing an even more severe long-term downturn, and that puts vulnerable people even more at risk."

In all of Latin America, low-income communities are more at risk as they are often forced to resume work informally or go hungry. Wealthier individuals are more likely to both support and obey lockdown measures, as they have savings and resources that allow them to survive the freeze.

"The potential for unrest is very high," says Guzman. "People's hunger is growing, and it is translating into anger with police forces and the government. The crisis is increasing Colombians' awareness that government institutions aren't up to the task of dealing with this situation."

Eighty percent of Colombia's export market is driven by petroleum and mineral extraction, and both foreign and domestic companies are already pulling back on investment as weakened oil prices make exploration unprofitable. In an economy whose currency has shown a strong correlation with oil prices, this exacerbates an already looming recession. As inflation increases, a weakened Colombian peso means payments on a foreign debt ledgered in dollars becomes a heavier burden, and economic contraction becomes more painful.

The impact of the coming economic contraction will cut across all strata of society. "It isn't a matter of only affecting the wealthy," says Mathew Smith, an economic analyst and journalist in Medellin. "It means double-digit unemployment, collapse of small businesses, government rollback of spending on social programs like health and education, and a rise in crime in a region where the rate is already high."

Ecuador has been the Latin American nation hit hardest by COVID-19. Official government statistics report 506 deaths, but the local press has been claiming for weeks that the actual number is far higher. A recent New York Times study suggests the actual number may be 15 times larger. The city of Guayaquil was so overwhelmed that citizens left bodies on the streets and cemeteries were forced to use shared graves.

The economic freeze has cost the country an estimated $4.7 billion in sales, plus an unknown amount in lost oil revenue and investment. The government defaulted on its most recent foreign debt payment due to a lack of liquidity, downgrading its international credit rating. Tourism has plummeted, leaving millions economically paralyzed.

The Ecuadorian government has announced plans to slowly reopen the economy while maintaining social distancing measures. The state of the economy has left them little choice.

Colombia has announced plans to maintain its strict lockdown until at least May 11, though some businesses that have been deemed essential will begin to open this week. Local and federal officials have been at odds over how and when to formally restart the economy, with President Iván Duque pushing to open more quickly. He is opposed by a vocal group of mayors and governors.

Venezuela has reacted to ongoing shortages by announcing plans to nationalize sectors of the food industry and implement price controls—a strategy that has worsened both inflation and smuggling in the past, as Venezuelan farmers chose to sell their goods in Colombia rather than in government-mandated markets.

As these countries weigh their limited options, officials fear that resuming normal life too soon may result in a loss of life and increased hardship. But for the most vulnerable citizens, like Ribullen, waiting too long could have a disastrously similar effect.

Joshua Collins is a freelance journalist based in Bogota, Colombia.