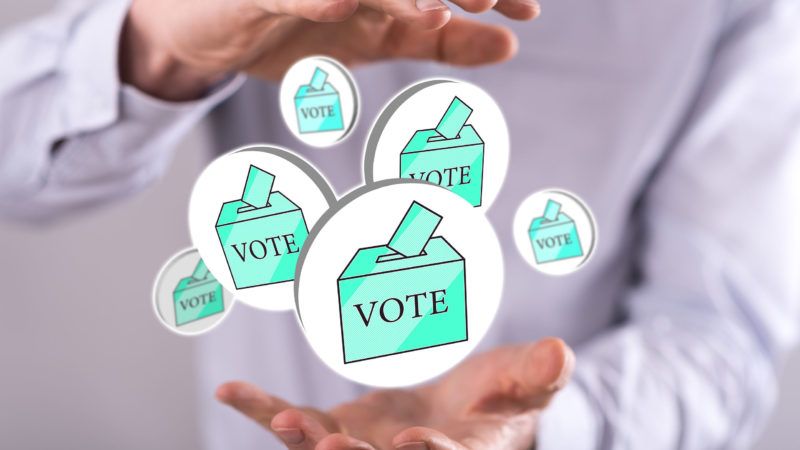 A judge in Illinois yesterday paved the way for the Libertarian Party (L.P.) to actually get on the ballot in her state after COVID-19 made traditional petitioning to gather signatures for ballot access impossible.

Richard Winger reports in the indispensable Ballot Access News that Judge Rebecca R. Pallmeyer, in an as-yet-unwritten opinion in the case of Libertarian Party of Illinois v. Pritzker, decided that if a third party was on the ballot in 2016 or 2018 for an office, it can be on the ballot again this year with no petition signatures required. For the L.P., this includes the presidential and Senate ballot slots.

For other legislative seats, candidates will only need to collect 10 percent of the normal requirement this year (which will mean 2,500 required instead of 25,000). The previous deadline for the petitions of June 22 has also been pushed back to August 7. The petitions can also be collected via e-signed electronic documents (although "the candidate or party must then print out the results and transport a piece of paper to election officials.")

The Illinois Herald & Review reports that Illinois asked Pallmeyer to approve a proposal that would have required voters "to print out ballot petitions, sign them with a pen and return them to candidates either physically or electronically. The deadline would have remained June 22 and the number of required signatures would have been halved."

L.P. national chair Nicholas Sarwark says no longer needing to collect a huge number of Illinois signatures is a "big story" for the L.P. Actually meeting the original Illinois requirements with COVID-19 would have been an "impossible dream," but with this legal win behind them, he's confident similar arguments, either made inside or outside formal lawsuits, can be expected to win over other judges or state officials.

Winger notes that although Illinois insisted that an August 7 deadline was far too late, "The minor party petition in Illinois was due in early August in all the years 1931 through 1999.  Before 1931, it was in September, and it was in October from 1891 through 1929."

The L.P. is facing COVID-19-related ballot access problems in many states, with traditional petitioning methods essentially illegal or impossibly difficult. (Ballotpedia is keeping a running tally of every election law or requirement change that COVID-19 is inspiring.)

The L.P. as of today is on 36 ballots (plus the District of Columbia), and involved in active lawsuits against Maine, Georgia, Maryland, and Connecticut over ballot access issues (though not all of them are strictly about COVID-19-related problems).

The L.P. would prefer to get concessions on impossible signature rules via negotiation, not lawsuits, and its members are in discussions with many states about these issues. However, L.P. Executive Director Daniel Fishman says some states, such as Alabama, have so far ignored their communications.

Still, Fishman says L.P members tend to get generous with donations when ballot access issues are in question. He expects the party will have the resources it needs to fight it out with various states in court if it comes to that, and "we fully intend to pursue legal action everywhere we have to."

If circumstances push the party's selection of its presidential ticket past the currently scheduled late May convention in Austin, Texas, which may have to be canceled or postponed, it could harm the L.P. in certain states, such as New Hampshire, that require the specific presidential candidate to be named on petitions. A decision on holding, postponing, or otherwise rethinking the convention and nomination process is likely to be made on May 2, and Fishman regrets the potential loss of a national C-SPAN audience if an in-person convention is ruined by COVID-19.

Many in the L.P. are eagerly awaiting a possible decision from Rep. Justin Amash (I–Mich.), who has been hinting at a potential run. Fishman is not afraid that falling short of 50-state ballot access will discourage professional officeholders like Amash from thinking of the L.P. as a potential home for a presidential run.

"I don't think any [such candidate] is going to try to run with the L.P. just because we have 50-state ballot access," Fishman says, though he grants that "is a perk." Rather, he says that "people run with us because we are expressing a philosophy that is neither Right nor Left that appeals to principled politicians who otherwise have no home." The recent history of both major parties have shown them to be shifting masses of personality cults (such as the one dedicated to Trump) and opportunists who respond to shifting winds (such as the Democrats' slow turnaround on gay marriage and marijuana legalization, which the Libertarians have long been for).

Regardless of whether Amash goes Libertarian this year, Fishman thinks it would be great to have a sitting elected congressperson stressing the iniquities of ballot access law, an issue Amash even as a Republican was dedicated to reforming.

Still, the L.P. does intend to fight it out, COVID or no COVID, to once again reach that 50-state prize. A typical letter requesting a secretary of state be reasonable, from Georgia L.P. Chair Ryan Graham, argued that "In light of [COVID-19], we would ask that the Secretary of State understand the effect this crisis and the states of emergency has had on people's willingness to be approached by a stranger, let alone take a pen or a clipboard. Additionally, though all of our petitioners are healthy and would stop petitioning at the first sign of illness, Corona is often spread by people who are asymptomatic…[this] seriously threatens our ability to get on the ballot….In light of the states of emergency and in the interest of public health, we would ask that the petition requirement for all political body and independent candidates be waived for the 2020 General Election."