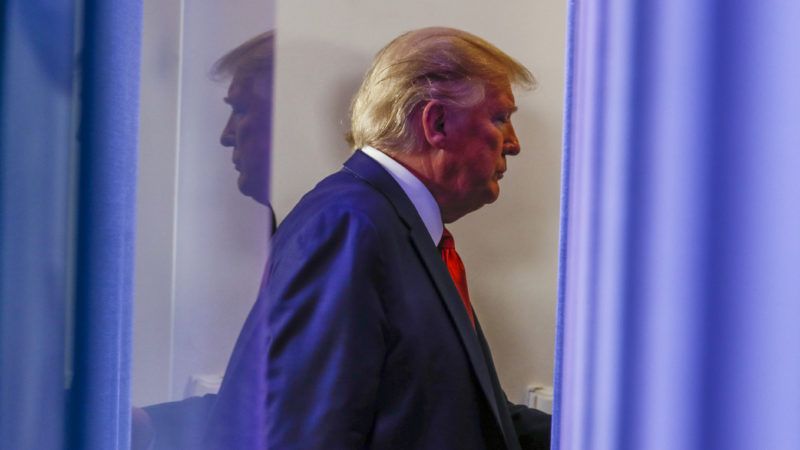 Trump threatens executive order suspending all immigration. President Donald Trump and Republicans are once again using the mass death and unemployment brought about by COVID-19 to try and institute their favorite flavors of authoritarianism. Last night, the president announced on Twitter that he would be "signing an Executive Order to temporarily suspend immigration into the United States!"

As with a lot of Trump bluster, the president might be overstating the case.

In reality, the executive order has not yet been drafted and will likely not attempt to suspend all immigration, officials from the Department of Homeland Security told Politico. "One possibility that has been discussed is an exemption for temporary guest workers, including those who work on farms," Politico reports. With non-worker visas already severely restricted, "the impact would probably address only immigrants coming here to work."

Wait you're telling me the president tweeted a thing that wasn't a done deal yet? HEAVEN FORFEND https://t.co/T0dhyePM2U

The odds seem pretty good that at tomorrow's press conference trump will be angrily denying that he ever tweeted out what purported to be an blanket ban on immigration.

Implicit in Trump's tweet "is that immigrants are spreading COVID-19 in the United States," notes Alex Nowrasteh, director of immigration studies at the Cato Institute's Center for Global Liberty and Prosperity. But "there is no relationship between COVID-19 cases or deaths at the county level and the share of the population that is foreign-born in each county," as Nowrasteh details in this post.

While "the federal government has the legitimate power to restrict immigration or other travel across borders to limit the spread of serious contagious diseases and to protect public health," blanket bans "are akin to closing the barn door after the horse has escaped," adds Nowrasteh. "At most, a reduction in travel from China might have delayed the onset of a pandemic for a few weeks after Trump imposed a virtual ban on travelers and immigrants from China on February 2, 2020. But further immigration bans now will have no effect."

Trump and his allies are largely portraying the possible order as a pro-employment measure, rather than one aimed at public health (which both plays to the Trump base's preoccupation with foreigners stealing their jobs and avoids any awkwardness around whether the coronavirus outbreak is still a big deal as the president encourages protests against stay-at-home orders).

"There is another side to this issue, of course," writes Tyler Cowen at Bloomberg: "Many countries may decide to continue to limit visitors from the U.S. The American government might then respond by restricting in-migration from those countries."

In any event, the president has moved on this morning to more ranting about how good his TV press conference "ratings" are and how powerful people in media won't acknowledge it. Trump may give his base some red meat with overstated promises about immigration, but the only thing that truly seems to animate the man himself is projecting popularity. 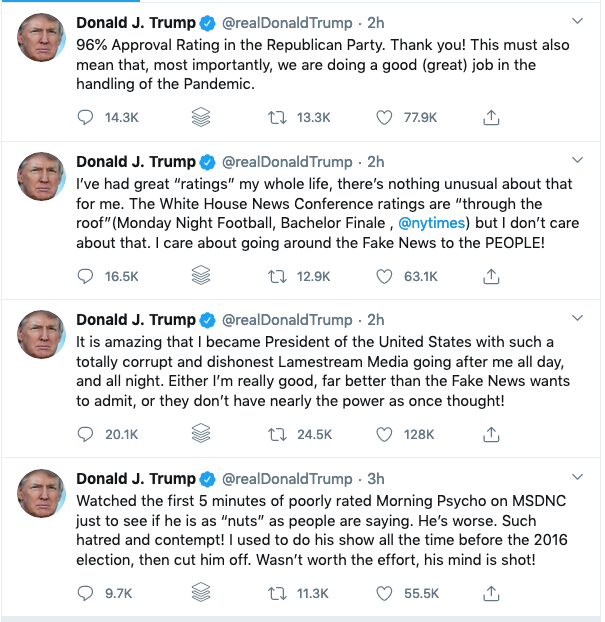 With this Zoom, I thee wed… New Yorkers can now get married via video chat. Gov. Andrew Cuomo issued an executive order saying clerks can perform ceremonies remotely, which was banned. "Many marriage bureaus have temporarily closed as a result of the COVID-19 pandemic, preventing New Yorkers from getting a marriage license during the current health emergency," the governor's office said in a press release, also noting that this permission will only be temporary.

Federal labeling laws make pandemic grocery store shortages worse. The problem right now isn't that there's a food shortage, explains Reason's Eric Boehm, but rather supply chain issues. And picky laws about how food can be packaged and labeled for sale to restaurants versus grocery stores means that a lot of products sitting in storage—or going to waste—while restaurants are shut down cannot be repurposed for sale to grocery stores, even if the food content is identical.

• For new Hulu series Little Fires Everywhere, Kerry Washington and Reese Witherspoon "both tossed leading-lady egos aside to play thoroughly unappealing bullies whose sophisticate veneers quickly give way to the streetfighters inside," writes . (Correction: Glenn Garvin is the author of this review.) "Watch out for them, but watch."

• Against bailing out the newspaper industry.

• Fifty-eight percent of voters want a vote-by-mail option this fall, according to a new NBC/Wall Street Journal poll.

• This new study doesn't bode well for opening back up restaurants and bars with slight modifications such as more spaced-out tables. But it does add more fuel to the theory that "coronavirus is primarily transmitted through larger respiratory droplets, which fall out of the air more quickly than smaller droplets known as aerosols, which can float for hours."

• The Centers for Disease Control and Prevention's (CDC) bungling of early testing for COVID-19 just keeps getting worse. In February, the CDC "sent states tainted test kits in early February, that were themselves seeded with the virus," notes Ars Technica.

• Some good news, for a change: