Meat processors aren’t the only segment of the food economy that’s on the brink. 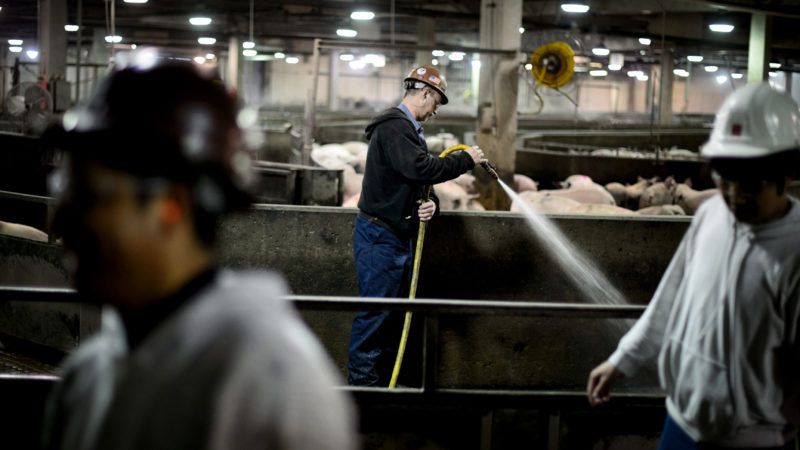 The JBS pork processing facility in Worthington, Minn., the nation's third-largest, continues to operate, but the national pork supply is in trouble. (Glen Stubbe/TNS/Newscom)

This week, Tom Vilsack, who led the U.S. Department of Agriculture under President Barack Obama, warned that COVID-19 is spurring a "cascading series of events" that threaten the domestic food supply.

Vilsack,  who now gets paid a lot to tout the perceived greatness of our nation's dairy exports, is right to sound the alarm—at least in the short term. Domestic food supply chains that were already bending due to the COVID-19 pandemic are now buckling. The giant Smithfield pork processing plant in Sioux City, South Dakota, which processes one out of every two-dozen or so pigs sold for food in this country, closed indefinitely last week after hundreds of its workers there tested positive for the coronavirus. Then, this week, Smithfield closed plants in Missouri and Wisconsin.

Smithfield competitors JBS and Tyson were also forced to close plants in other states when their workers tested positive for COVID-19.

While it's true that "plenty of other[ plants] are open," that may not be the case for long. Kenneth Sullivan, Smithfield's CEO, warned the wave of massive plant closures is "pushing our country perilously close to the edge in terms of our meat supply."

Even at large plants that remain open, staffing shortages caused by COVID-19 are already shrinking the food supply. Farmers and processing plants have begun making difficult decisions to kill millions of healthy, perfectly edible animals instead of selling them for food—a practice known in the industry as "depopulation"—because of plant worker shortages caused by COVID-19 illnesses.

In a normal world, foreign-raised meat suppliers could help pick up the slack. But it's unrealistic to believe workers at foreign facilities aren't—or won't be—impacted by COVID-19 in the same way U.S. workers have been.

Meat processors aren't the only segment of the food economy that's on the brink. Food warehouses are seeing some workers fall sick and die. At least 30 grocery workers across the country have died from COVID-19, too. And immigration restrictions, as I explained in a column last month, could impact the planting and harvesting of many of our nation's crops. Those food supply chain issues could come home to roost during harvest season, when crops that are usually scheduled for picking aren't harvested because there are not only no workers to pick them, there were no workers available to plant them in the first place.

Given the depth, breadth, and pace of these pressures, the food system as we know it could unravel quickly. If our food system does implode—and I'm not predicting it will, just that it could—then what might be left in its place? Thankfully, even under worst-case scenarios that don't also involve nuclear war or an asteroid, it will be changed—perhaps temporarily, perhaps fundamentally—but should still contain sufficient food.

If meat supply-chain issues do turn into widespread shortages, and if those shortages last more than several months or so, changes to the American diet could be swift and dramatic. I expect frozen beef and pork and other protein sources—from seafood to legumes—will pick up a good deal of the slack. Poultry and bulk meat sales from small farmers and ranchers whose animals aren't processed in large facilities—already strong today—will also grow. Other niche foods, including plant-based meat substitutes, lab-cultured meats, and insect-based protein powders will likely gain in popularity, too. Home gardens and chicken coops, already popular to varying degrees, will become even more common. Fishing will, too. Hunting may reverse years of declining popularity. Foragers and roadkill connoisseurs will have their day in the sun, too.

If social distancing guidelines become the norm, for example, workers may no longer be allowed to stand elbow-to-elbow on the line at a meat-processing plant (some of which, such as the Smithfield plant in Sioux Falls, employ thousands of workers). Efforts to further increase mechanization and to remove both line workers and USDA inspectors from the cutting-room floor might follow. Cashier-less grocers—such as this Amazon Go store in Seattle—may become the norm (perhaps with wider aisles) because they don't require customers to stand in line or use a touch screen to pay for food, and they allow customers to easily use their own bags (rather than icky shopping carts).

What is government's role in this adaptive process? It should facilitate the recovery by cutting red tape and not creating new obstacles for businesses and consumers. That means dumping tariffs and removing recent immigration restrictions, and no more ordering farmers markets to close nor banning alcohol sales.

But government also has an important, affirmative role to play. If testing everyone for COVID-19 (and related antibodies) is the best way for the nation to get back to work, the government should ensure tests, antibody treatments, vaccines, and other preventative and therapeutic treatments are provided first to essential workers—meaning not just doctors and first responders, but also grocery, farm, and plant laborers, many of whom have risked their lives to work through the pandemic.

No one we know of has any special immunity to COVID-19. That will change over time. But it may not change in time to protect the nation's food system from the upheavals that may follow.