"We found no pattern of sexual misconduct by Biden, beyond hugs, kisses and touching that women previously said made them uncomfortable."

(Screenshot via The Hill)

It's an excruciatingly matter-of-fact article, bereft of the emotion and rhetorical flourishes that have often characterized the Times' past reporting on #MeToo stories. The Times' investigative piece on Deborah Ramirez, Brett Kavanaugh's Yale accuser, was headlined, "Brett Kavanaugh Fit in With the Privileged Kids. She Did Not." The paper also ran ostensibly objective pieces with headlines like "For Christine Blasey Ford, a Drastic Turn From a Quiet Life in Academia" and "With Caffeine and Determination, Christine Blasey Ford Relives Her Trauma." These were news articles, but it was not hard to detect an agenda: portray the accuser as so likable and sympathetic that readers would want to believe her.

There is no such agenda in the Reade article; the reporters come across as extremely skeptical of her (not without some justification). The paragraph containing the news hook for this story—that Reade finally, on Thursday, filed a police report about the incident—contains this oddly placed reminder: "Filing a false police report may be punishable by a fine and imprisonment."

The New York Times' Lisa Lerer and Sydney Ember spoke with dozens of people—including many who worked alongside Reade and Biden in 1993, the year that she alleges Biden digitally penetrated her without her permission while they were alone together—but the only supportive evidence came from secondhand accounts of friends and family.

"No other allegation about sexual assault surfaced in the course of reporting, nor did any former Biden staff members corroborate any details of Ms. Reade's allegation," wrote Lerer and Ember. "The Times found no pattern of sexual misconduct by Mr. Biden, beyond the hugs, kisses, and touching that women previously said made them uncomfortable." Given how ridiculous this passage sounded to many readers, editors swiftly removed—without acknowledgment—everything after Biden. The Twitter version endured for longer. 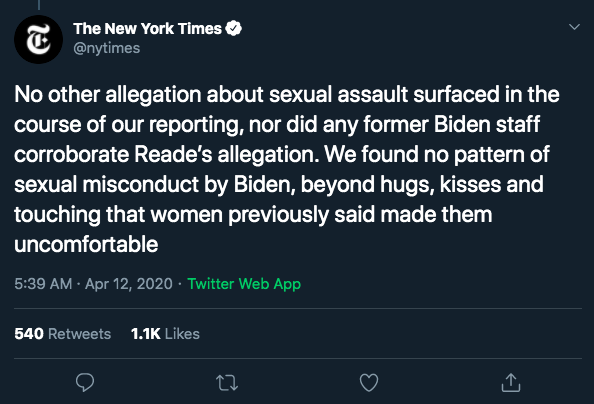 The New York Times subsequently deleted the tweet from the thread about the story.

While the Times' dismissal of the existence of a pattern has attracted most of the derision, an earlier point is more obviously flawed. As Current Affairs editor Nathan Robinson points out, it is false to say that none of Biden's staff corroborated any part of her allegation. Reade has alleged that after she complained about sexual harassment, Biden's people punished her by taking away most of her duties, which included supervising the interns. The New York Times' story confirmed with two former interns that Reade "abruptly stopped supervising them in April, before the end of their internships."

This does not at all prove that Reade is telling the truth—she could have lost her intern management duties for a thousand different reasons—but it contradicts the claim elsewhere that there was zero corroboration from Biden staff. It may be a small thing, but it's something.

It's fine to be skeptical of Reade. (The suspicious timing of her allegations is just one reason. Reason contributor Cathy Young notes several others.) And it's more than fine—commendable, even—for journalists to seek the facts and then refrain from making sweeping judgments when there just isn't compelling evidence to establish that a decades-old story holds enough water for a reasonable person to consider the subject disqualified from higher office. But the Times and other outlets are proceeding with a level of caution that's inconsistent with how they treated the Kavanaugh allegations, even though the evidence was similarly weak (and the underlying incidents less serious) in that case. One cannot help but indulge the suspicion that the inconvenience of the allegation against Biden—it could work to the advantage of President Donald Trump's re-election—might have given the media (and some erstwhile "believe all women" activists) pause.

Tellingly, the Times story also includes three full paragraphs about the sexual misconduct accusations against Trump, including his alleged consensual affair with pornographic actress Stormy Daniels and his hot mic comments to Access Hollywood's Billy Bush. "Even so, Mr. Trump has at times attacked opponents over their treatment of women," wrote the Times' reporters. "The president has not mentioned Ms. Reade's allegation, which has circulated on social media and in liberal and conservative news outlets."