Surgeon General Jerome Adams wants us to believe the CDC realized the danger posed by asymptomatic carriers only last week. 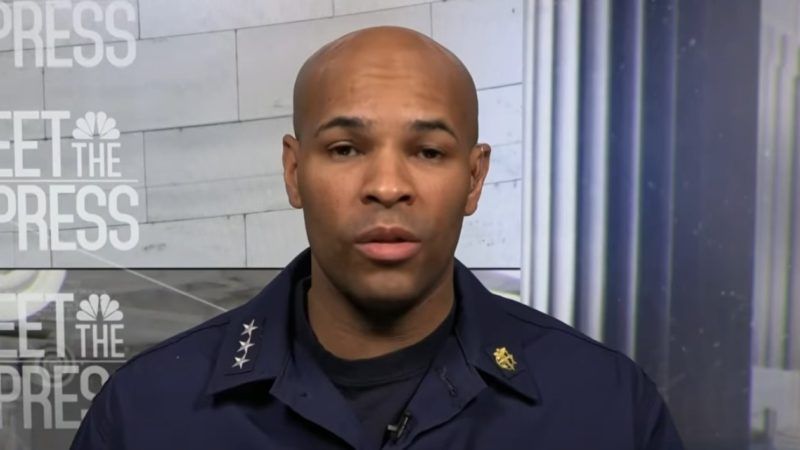 The Centers for Disease Control and Prevention (CDC) revised its advice concerning face masks and COVID-19 last week, telling us to "cover your mouth and nose with a cloth face cover when around others." The CDC had previously said that "if you are NOT sick, you do not need to wear a facemask unless you are caring for someone who is sick (and they are not able to wear a facemask)."

The official justification for this shift is that the CDC suddenly realized people can transmit the COVID-19 virus even when they do not feel sick. Yet that is something we have known for months.

"Here's what's changed," Surgeon General Jerome Adams claimed on Meet the Press yesterday. "We now know that about 25%, in some studies even more, of COVID-19 is transmitted when you are asymptomatic or presymptomatic." While that particular estimate, which CDC Director Robert Redfield began floating on March 31, is relatively new, it has been clear at least since February that people can carry the virus for days before they develop symptoms and that some carriers never feel ill.

A study published in February, based on 88 cases in Wuhan, China, estimated that the mean incubation period for COVID-19 was 6.4 days. Another study published the same month, based on "publicly available event-date data from the ongoing epidemic," put the incubation period at two to 14 days with a mean of about five days. Based on those findings, the researchers recommended that "the length of quarantine should be at least 14 days." A March 10 study, based on 181 cases, essentially confirmed those results, estimating a mean incubation period of five days and finding that "97.5% of those who develop symptoms will do so within 11.5 days."

A January 30 letter to The New England Journal of Medicine, based on several cases in Germany, warned that "asymptomatic persons are potential sources of [COVID-19] infection." A February 13 letter to the International Journal of Infectious Diseases estimated that 31 percent of people infected by the COVID-19 virus do not have symptoms. A research letter published in The Journal of the American Medical Association on February 21 described an asymptomatic carrier from Wuhan who seemed to have infected four other people. A February 26 Global Biosecurity report noted that "asymptomatic transmission has been documented" and "the viral load in symptomatic and asymptomatic people is not significantly different."

When it comes to wearing face masks in public to protect others from infection, however, it does not really matter whether carriers are asymptomatic or presymptomatic. The point is that people can transmit the virus without realizing they are carriers. Given the incubation period, that phenomenon must be common.

A March 4 study of 24 asymptomatic COVID-19 patients in Nanjing, China, found that five subsequently developed symptoms such as fever, cough, and fatigue. "None of the 24 cases developed severe COVID-19 pneumonia or died," although 17 had CT scans consistent with the disease. The remaining seven, who were younger than the rest, "showed normal CT image and had no symptoms during hospitalization." A March 12 study of passengers and crew on the Diamond Princess cruise ship estimated that 18 percent were asymptomatic.

More-recent testing of the general population in Iceland found that about half of the volunteers who tested positive reported no symptoms. Some of those people may subsequently have developed symptoms. They were nevertheless unwitting sources of infection during the period when they had no reason to suspect they were carriers.

During a White House briefing yesterday, a reporter asked Anthony Fauci, director of the National Institute of Allergy and Infectious Diseases, "how many asymptomatic cases" there might be in the United States. "We don't know," Fauci replied. "Even among us…we differ about that. It is somewhere between 25 percent and 50 percent." He cautioned that "right now we are just guessing," saying the issue would be clarified by wide antibody testing, which will identify people who had the virus and recovered, many of whom may never have realized they were infected.

"Seriously people—STOP BUYING MASKS!" Adams tweeted on February 29. "They are NOT effective in preventing [the] general public from catching #Coronavirus, but if healthcare providers can't get them to care for sick patients, it puts them and our communities at risk!"

By that point, it was clear that transmission by asymptomatic or presymptomatic carriers was playing an important role in the pandemic. Now Adams wants us to believe no one knew that until last week. The misguided advice from Adams and the CDC needlessly endangered people who could have benefited from the precautions they are belatedly recommending.