The group's petition "would dangerously curtail the freedom of the press embodied in the First Amendment." 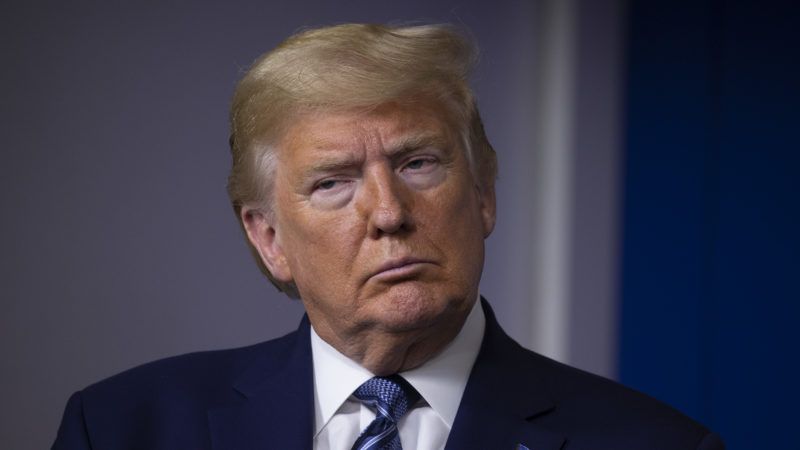 The progressive media organization Free Press thinks President Donald Trump is spreading dangerous misinformation during his televised press briefings on the government's coronavirus response. So it petitioned federal regulators to make broadcasters either stop airing them or "put those lies in context with disclaimers noting that they may be untrue and are unverified."

It was an odd demand. If Free Press think the president is abusing his authority, the group probably shouldn't be asking his administration to police how people cover the president's pronouncements. Seems like the sort of request that could backfire.

Thankfully, the Federal Communications Commission (FCC) rejected the petition on Monday, sending a stern rebuke to anyone who thinks censorship is a valid response to problematic speech.

"The federal government will not—and never should—investigate broadcasters for their editorial judgments simply because a special interest group is angry at the views being expressed on the air as well as those expressing them," said FCC Chairman Ajit Pai in a statement. "In short, we will not censor the news."

Free Press based its argument for FCC intervention on public health, reasoning that Trump—as well as certain right-wing media personalities, like Rush Limbaugh—had given false information that could lead people to make unsound medical decisions. The petition specifically cited the president's praise for the anti-malaria drug hydroxychloroquine, which is unproven as a remedy for COVID-19.

It's true that the FCC has some power to prevent the dissemination of false information. But federal law wisely places important limits on the agency, and for obvious reasons. No one should want regulators to have broad discretionary power to suppress speech that they subjectively believe is contrary to the public interest. This would inevitably lead to politically motivated censorship of speech that criticizes government actors.

In rejecting the petition, FCC General Counsel Thomas Johnson Jr. cogently explained that the FCC can take action against broadcasters only if they knew the information being broadcast was false, if they knew it would cause substantial harm, and if the information actually did cause substantial harm. Johnson pointed out that Free Press's demand for censorship fails on all three counts:

At this moment, broadcasters face the challenge of covering a rapidly-evolving, national, and international health crisis, in which new information—much of it medical or technical in nature and therefore difficult to corroborate or refute in real time—is continually revealed, vetted, and verified or dismissed. In addition, we note that the President and members of the White House Coronavirus Task Force, including public-health professionals, have held daily press conferences in which they exhaustively answer critical questions from the press. Under such circumstances, it is implausible, if not absurd, to suggest that broadcasters knowingly deceived the public by airing these press conferences or other statements by the President about COVID-19. Moreover, there is a strong argument that broadcasters are serving the public interest when they air live coverage of important news events, such as briefings by the President, the White House Coronavirus Task Force, and state governors, during this national emergency.

The impulse to punish broadcasters for letting people hear what their government officials have to say for themselves is bizarre, and it's a relief to see the FCC take the obvious position that the First Amendment prohibits such censorship. Media outlets can choose whether they want to air Trump's remarks on COVID-19—or anyone else's. The government doesn't get to make this decision for them.