William Barr: "We want to make sure our institutions don't become petri dishes." 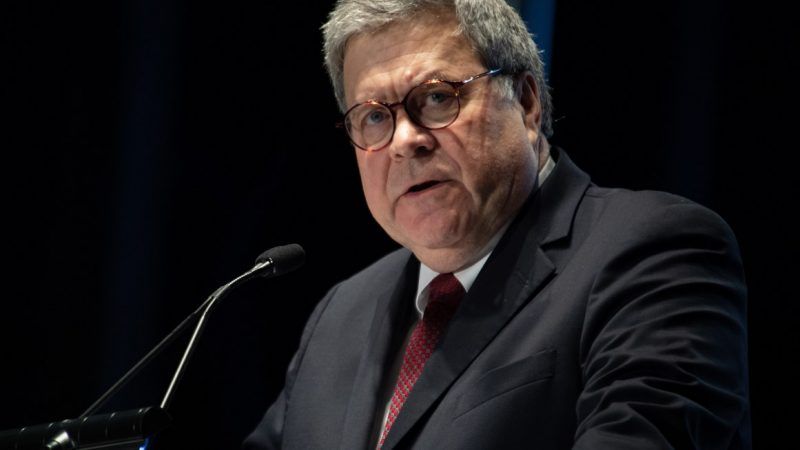 Attorney General William Barr announced Thursday that the federal Bureau of Prisons (BOP) will transfer some elderly and at-risk inmates into home confinement. This, he hopes, will mitigate potentially deadly coronavirus outbreaks inside federal prisons.

On Tuesday, a bipartisan group of 14 senators, led by Dick Durbin (D–Ill.) and Chuck Grassley (R–Iowa), urged Barr and BOP Director Michael Carvajal to expand use of compassionate release or the Elderly Home Detention Pilot Program.

"Conditions of confinement do not afford individuals the opportunity to take proactive steps to protect themselves, and prisons often create the ideal environment for the transmission of contagious disease," the senators wrote.

A provision in the Senate's coronavirus relief package would also expand BOP's discretion to move inmates into home confinement.

According to the most recent information from the BOP, 10 federal inmates and eight BOP employees are currently infected by COVID-19. There are roughly 20,000 federal inmates over the age of 55.

"There are particular concerns in this institutional setting. We want to make sure our institutions don't become petri dishes and it doesn't spread rapidly through an institution, but we have protocols that are designed to stop that and we are using all the tools we have," Barr said.

Civil liberties groups applauded the move, but many urged the Justice Department to take additional steps. Inimai Chettiar, legislative and policy director for the Justice Action Network, a criminal justice advocacy organization, said in a press release that Barr's directive places "significant restrictions on which individuals would be eligible to return home."

A memo issued by Barr on Thursday directs BOP to exclude all sex offenders from early transfer into home confinement and gives discretion to consider other factors besides age and risk of complications from COVID-19, such as the seriousness of their crimes, whether inmates have had any disciplinary infractions within the last year, and whether they have a verifiable re-entry plan.

"This memo appears to further weaken a provision Congress included in the Phase III coronavirus response package, which expanded the Bureau of Prisons' ability to transfer non-violent prisoners to home confinement during this emergency," Chettiar said. "We hope both the President and Congress are vigilant about ensuring the Department of Justice does not slow-walk the dire and immediate need to reduce the overcrowding in federal prisons, because any delay here could have disastrous and life-threatening consequences to people in prisons, correctional officers, and everyone in their surrounding communities."

There is also the question of how eager the BOP will be to use its newfound discretion. The BOP has suspended all visitations and is quarantining all new inmates for 14 days to try and keep the virus from spreading. However, several inmates at FCI Aliceville, a federal women's prison in Alabama, told Reason yesterday that the warden is ignoring their applications for compassionate release and home confinement.

Meanwhile, the BOP and the U.S. Attorney's Office for the District of Maryland are fighting a judge's order to transfer an inmate into home confinement earlier than scheduled. The order was prompted by coronavirus concerns.

"We hope that the action being taken by DOJ and BOP will flatten the curve in our federal system," American Civil Liberties Union Senior Legislative Counsel Kanya Bennett said in a press release. "We urge them to take additional steps to reduce the federal prison population, including decreasing requests for pretrial detention. These steps will have a significant impact on protecting those living and working in our prisons."