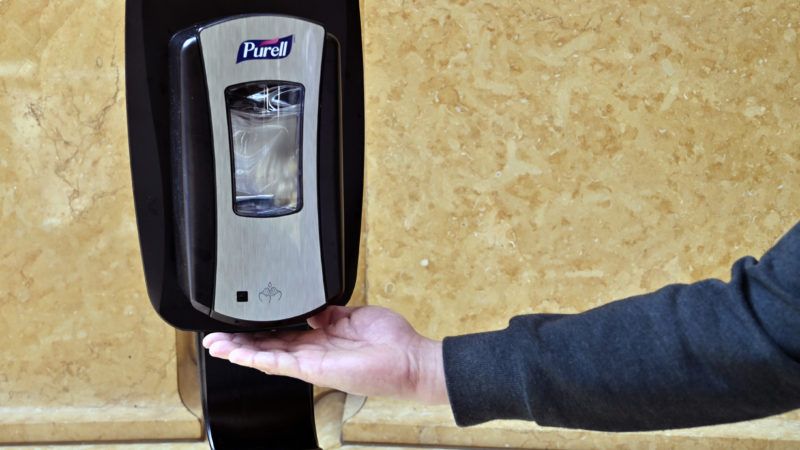 It was quite clear by March 5 that the COVID-19 outbreak was going to be trouble. At least 200 Americans in 17 states were already infected with the virus. The Dow Jones fell by more than 1,000 points that day. Vice President Mike Pence admitted there would not be enough coronavirus test kits available to meet growing demand.

And on that same day, the federal government rejected a request from Gojo Industries, the company that makes Purell hand sanitizer, to exempt some of its products from the 25 percent tariffs that President Donald Trump imposed in 2018. Specifically, the company was seeking to avoid paying tariffs on automated dispensers, which are assembled in the United States but depend on electronic parts manufactured in China.

"Your request was denied because the request failed to show that the imposition of additional duties on the particular product would cause severe economic harm to you or other U.S. interests," wrote Joseph Barloon, general counsel for the Office of the U.S. Trade Representative.

The process for gaining an exemption from Trump's anti-China tariffs is a complex, opaque process with no due process for businesses whose requests are denied. The system gives the executive branch unilateral authority to determine what products get taxed and which do not.

Gojo Industries applied for that exemption in 2019, before the coronavirus was a threat or there was a shortage of hand sanitizer on American store shelves. But the March 5 rejection demonstrates acutely how Trump's trade policies undermined U.S. public health in advance of the outbreak by forcing American consumers and businesses to pay higher prices for goods needed to fight the outbreak, likely resulting in lower inventories.

The rejection also shows that, even as the coronavirus was starting to have an impact in America, the administration was still working to keep trade barriers raised. Less than a week later, on March 10, the administration would issue a blanket exemption for many medical goods and equipment imported from China.

The Trump administration imposed tariffs on hand sanitizer, patient monitors, thermometers, oxygen concentrators, medical protective clothing, and sterile gloves in three phases since July 2018. Those tariffs were imposed despite repeated warnings from medical professionals that they would disrupt supply chains and erode the health care industry's ability to respond to a crisis.

According to research from the Peterson Institute of International Economics, imports of Chinese-made medical products fell by 16 percent from 2017 (the last full year before Trump's tariffs) to 2019.

The administration's protectionist policies "can only happen by imposing wrenching costs on businesses and consumers throughout the economy," says Dan Ikenson, director of the center for trade policy studies at the Cato Institute. "It is shocking, though, that they will even go so far as to sacrifice public health and undermine efforts to contain the pandemic in service to their evil ideology."

U.S. Trade Representative Robert Lighthizer defended the decision to impose those tariffs in op-ed for The Wall Street Journal. "By encouraging diversification of supply chains and—better yet—more manufacturing in the U.S., President Trump's economic and trade policies are helping" reduce America's vulnerability of having to import medical goods from other countries, Lighthizer argued.

But in requesting an exemption for their automated dispensers, Gojo Industries made it clear that moving production back to the United States was not possible.

"Attempts by GOJO to unilaterally move production out of China would require reverse engineering of the RFID chip that is manufactured by a Canadian company in China," the company wrote in its application. "Such action would violate their intellectual property. GOJO does not control the ability to move that production."

Moving production to another country was similarly out of the question.

"Third country sourcing is being explored but changing source requires time and money. An exclusion protects the existing supply chain for the U.S. manufactured product," the company explained in its request.

Nevertheless, the request was denied.