The DOJ has accused Maduro of using "cocaine as a weapon" to devastate American cities. 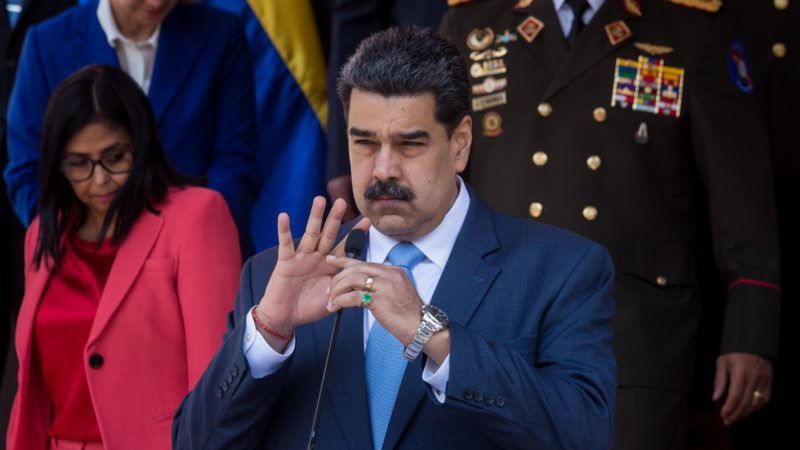 It's a sign of the times that the U.S. government indicting a foreign head of state on drug trafficking charges is almost a side story in today's news cycle.

On Thursday, the U.S. Department of Justice (DOJ) announced that it was indicting Venezuelan President Nicolás Maduro on charges related to drug trafficking and corruption. The DOJ is also offering a $15 million reward for information that leads to Maduro's arrest or conviction.

"For more than 20 years, Maduro and a number of high-ranking colleagues allegedly conspired with the [Colombian rebel group] FARC, causing tons of cocaine to enter and devastate American communities," said U.S. Attorney General William Barr in a statement. "Today's announcement is focused on rooting out the extensive corruption within the Venezuelan government."

The DOJ also announced charges against more than a dozen other individuals, including the Chief Justice of Venezuela's Supreme Court and the country's defense minister. The Washington Post reports that Maduro could face a 50-year mandatory minimum prison sentence if extradited to the U.S. and convicted.

For his part, Maduro has dismissed the charges against him, saying on Twitter that they are part of a U.S. and Colombian conspiracy to destabilize his country.

Charging another head of state with drug trafficking is extraordinary, but not entirely unprecedented. In 1988, Panamanian military dictator Manuel Noriega was indicted on federal drug and money laundering charges. He was ousted from power by a U.S. invasion the following year, and was later convicted and imprisoned in the U.S.

As the Washington Post notes, "Venezuela's far better-equipped military and Russian support for Maduro would complicate any U.S. attempt to take him into custody the same way."

It's true that President Donald Trump has spent the last few years trying to oust the Venezuelan leader. Throughout 2018, his administration tightened sanctions on Venezuelan government officials and the country's state-controlled oil sector. In January 2019, Trump went so far as to recognize opposition leader, National Assembly President Juan Guaido, as interim president.

That latter move lessens the diplomatic consequences of today's indictments, as officially the U.S. does not recognize Maduro as Venezuela's leader.

In July of that year, the U.N.'s High Commissioner for Human Rights released a report detailing the Maduro government's use of arbitrary arrests, torture, and death squads to maintain power in the economically devastated country.

It's nevertheless worrisome that the U.S. government is relying on unjust drug laws to make that happen. While the DOJ's press release accuses Maduro and his cronies of using "cocaine as a weapon" against American cities, the domestic effects of our own domestic war on drugs have been far more devastating. Without the massive black market created by drug prohibition, crooked communist governments would have to find some other illicit activity to keep their regimes afloat.

The timing of these indictments is also worrying. Right now, everyone is focused on how best to respond to the COVID-19 outbreak and the related economic fallout. The DOJ's action is, therefore, setting off fewer alarm bells than it normally would.

Nevertheless, the consequences of trying to indict a foreign leader are going to be felt long after this current crisis subsides.